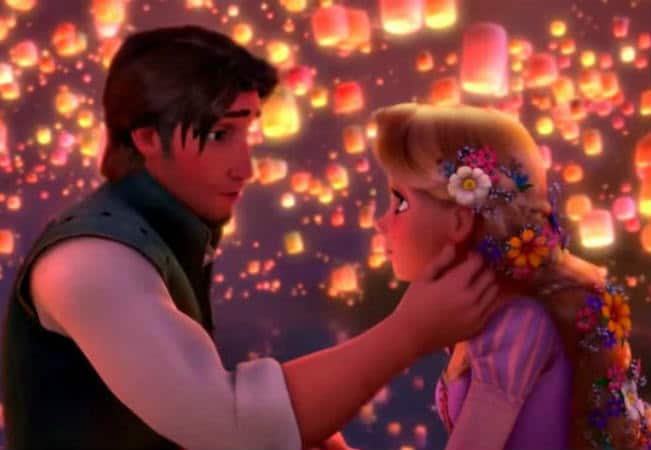 THE CLASSIC MOMENT: Rapunzel and Eugene watch the floating lanterns. What is love, if not a ride with your Prince Charming surrounded by floating lanterns lighting up the night sky?

Tangled, the 2010 animation movie, is Disney’s take on the beloved fairy tale of Rapunzel. It is an endearing and enchanting journey of the golden-haired Rapunzel who has lived all her life locked away in a tower by a wicked witch pretending to be her mother. Rapunzel longs for a life outside of the tower, but for now a trip to see the  “lights” on her birthday will suffice (which she witnessed year after year).  So she escapes the tower with the help of the “thief” Flynn Rider (who she later learns is actually named Eugene). She will give him back his stolen crown in exchange for taking her to see the lights – or the floating lanterns he reveals them to actually be.

Later in their journey (and after the two have started to fall in love), Rapunzel’s mother warns her that Eugene is only after the stolen crown that Rapunzel has hid safely away. But, Rapunzel decides to trust her heart, just as Eugene decides to open up his own to the new wondrous feeling of love.

Rapunzel has broken all the rules to reach this place. Now, it’s the moment of truth. What she waited for is about to come true.

THE ROMANTIC MOMENT: RAPUNZEL AND EUGENE

Eugene takes Rapunzel into the middle of a lake promising her the best view of the lights. Rapunzel : I’ve been looking out of a window for eighteen years, dreaming about what I might feel like when those lights rise in the sky. What if it’s not everything I dreamed it would be?

Eugene: It will be.

Rapunzel: And what if it is? What do I do then?

Eugene: Well, that’s the good part I guess. You get to go find a new dream.

She looks pensive and vulnerable. He asks her with infinite tenderness what troubles her. With disarming honesty, she replies that she is scared. After her dream to see the lights turns to reality, what comes next? Eugene’s words are enough to sweep any girl off her feet. The best part of a dream coming true, is that now one is free to go find a new dream.

Just then, the first solitary lantern floats up into the night sky. The irony is these lights are meant for the lost princess, who is Rapunzel herself. Her emerald green, gazelle like eyes widen as the soft notes of music start to waft in the air. The boat almost topples as she scrambles to the edge and hangs on to the mast. Her eyes are hypnotized by the lights. The camera swivels around; Mandy Moore’s angelic voice croons along. More lanterns rise from nearby ships. This is where she is meant to be. 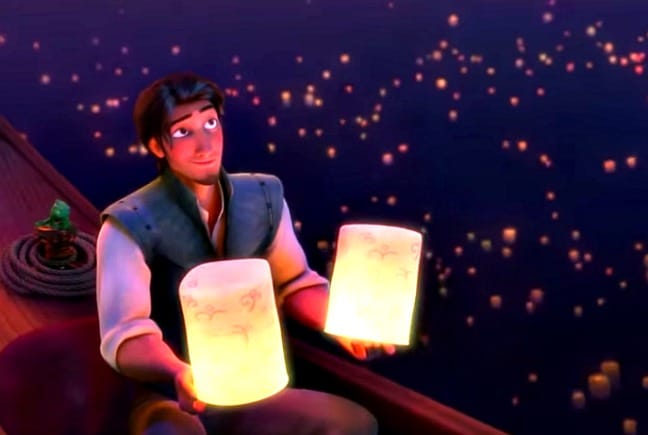 It is warm and real and bright, just like the lyrics of the beautiful song. You can almost feel the satisfied sigh escape Rapunzel. It turns out that the lanterns threw light on another gossamer feeling in the heart; the insistent feeling that wants her to trust this handsome stranger who has been exciting and helpful.

She realizes there is a special gift waiting for her. She only has to open her eyes to it. As she turns around, Eugene holds up two lit lanterns; his lopsided smirk and arched eyebrow firmly in place, undeniably and completely enamored by the delighted girl. 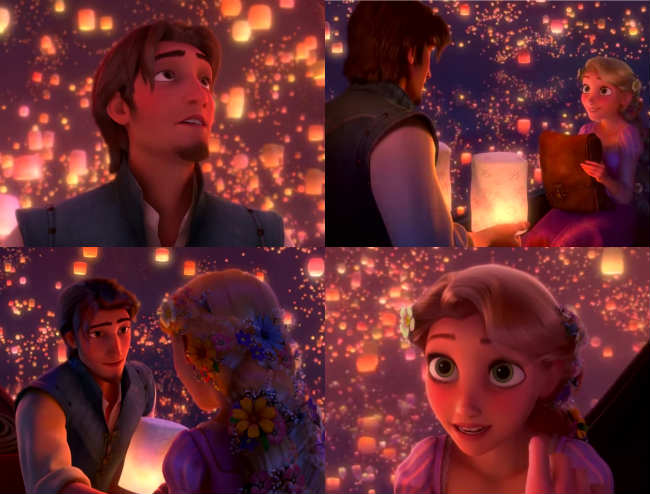 With a naïve wonder, she goes and sits down in front of him. She knows she can trust him; trust him enough to give him the crown. She claims she is no longer scared. He pushes the bag aside, starting to give in to the magic of the moment. They sit engulfed by the floating lights like dancing fireflies across the night sky. Rapunzel’s enchanted hair has pretty flowers, the camera focusing in on it.

Zachary Levi’s voice is rich and deep. On screen, the gorgeous pair let the lanterns soar high. Soon, he gazes upon her, spellbound as she holds a lantern, her face sparkling with delight. He is compelled to take her hand in his. She looks up surprised, but then both start to sing. (My heart soars each time.)

Rapunzel and Eugene hold hands and sing the words of the duet looking into each other’s eyes. Both are young and falling in love for the first time. The feeling is truly elevating. A blinking lantern comes into focus. The rhythm of the dimming of the light reminds me of a beating heart. And in this picturesque, absolutely dreamy background they lean closer.

Even Pascal turns pink (Rapunzel’s chameleon), expecting a kiss. What is perhaps even more beautiful is the way Eugene brushes an errant lock of golden hair and tucks it behind her ear. The guitar strums softly, but the kiss is interrupted and, for now, remains incomplete (which leaves the audience wanting more). The scene all happened in less than four minutes. A wonderful moment that makes you feel the magic of love. What the heart desires only turns more special when shared with the one you love. Happy endings are possible if you dare to reach out for what you dream, just like Rapunzel and Eugene. They get interrupted for now, only to get their happy ending later.

For me, this is one of the most romantic Disney scenes ever. A true fairy tale moment. Did you feel the enchantment too? Share your thoughts below.

Our romance-themed entertainment site is on a mission to help you find the best period dramas, romance movies, TV shows, and books. Other topics include Jane Austen, Classic Hollywood, TV Couples, Fairy Tales, Romantic Living, Romanticism, and more. We’re damsels not in distress fighting for the all-new optimistic Romantic Revolution. Join us and subscribe. For more information, see our About, Old-Fashioned Romance 101, Modern Romanticism 101, and Romantic Living 101.
Pin this article to read later! And make sure to follow us on Pinterest.
By Rhea Sinha on June 6th, 2015