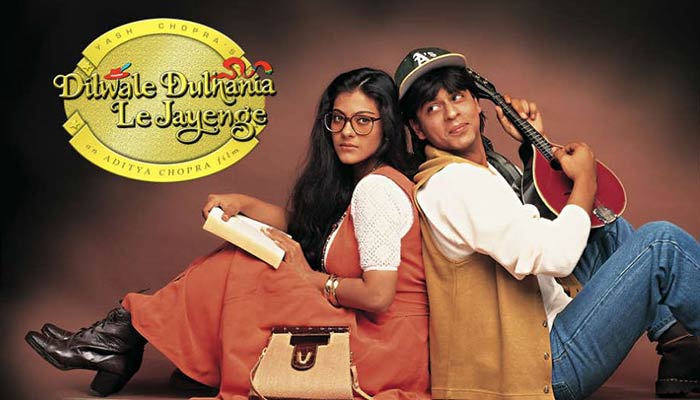 I love Dilwale Dulhania Le Jayenge so much that I have visited it’s filming locations, written research papers on it, forced every relative I know to watch it and photoshopped my face in scenes from it for my graduation cap, so I am unsure of how to start this article. Should I discuss why it is the essence of my core or why I have seen it nearly 20 times? Could I possibly explain the meaning it holds to my heart and how it is part of my identity? Unfortunately, I think I could write forever about this favorite movie of mine and never be able to explain how much I cherish it (so much that the biggest tragedy of my life was when my siblings accidentally broke my DVD of it). So, I will highlight two romantic moments instead.

Actress Kajol plays Simran, a frizzy-haired young woman in 1995 London, who is first shown living at home and writing in her journal, wondering about her “dream guy” and when she’ll meet him (a standard activity of life!). Her traditional Punjabi father (Amrish Puri, aka the villain from The Temple of Doom), however, has other plans for her since she is betrothed to his friend’s son in India, a man whom she has never met. Giving up her plans of finding her own romance, she asks her parents to let her take a trip across Europe before going to India to get married.

She’s running to catch her train on the first leg of her journey when a handsome young man, Raj (Shah Rukh Khan), helps her on board and begins flirting ridiculously with her. Simran, painted as more uptight and goody-goody, frowns upon this and is quite forbidding. She dislikes him instantly and sees him as idiotic and arrogant; he finds her serious and makes it his duty to prank her.

They can’t stand each other and spend the first half of the movie arguing until they get stranded by their friends and have to find a way to travel together. This is where things take off; Simran initially cries at the idea of being stuck with Raj (which is so, so funny) and stubbornly refuses to have anything to do with him. Unfortunately for her, he rescues her very It Happened One Night style and they end up traveling together. (This must be where I became obsessed with ‘hate-love’ romances.) They form the sort of friendship that occurs as you trek through beautiful Swiss scenery and get to know one another. Along the way, she learns that beneath Raj’s cocky and wicked exterior lies a good-hearted, honorable British-Indian with values like her own. (He’s roguish! mischievous, charming, and noble! You WILL fall in love with him. It is written in the stars.) Only at the end of the trip when they part do they realize the extent of their feelings for each other and watching them realize it is only too beautiful.

THE LEAD IN: “If she loves me, she’ll turn around.”

In an ideal state of being, Simran sits on the Eurail, reading a book with her huge glasses. She hears Raj’s ever-present banjo playing and goes out to find him thinking by a bridge. (I have visited this very bridge in real life, except by myself and without Raj. But it was okay because I photoshopped pictures of him into my photos later.)

She taps him on the shoulder and Raj turns to her, looking at her intently and seriously, in stark contrast to his usually joking persona. With probing eyes and a solemn face, he says: “I’m in love with you.”

Unsettled, Simran stares at him and he gazes steadily back. This goes on for a heated moment until Raj bursts into laughter at her reaction, saying it was a joke.

Naturally, Simran is quite perturbed and wants to murder him. What a terrible joke! A great, and terrible, joke! This scene affected me so deeply that I vowed to clarify all of the (obviously many) confessions of love that came my way before responding because they could be joking like Raj was here, and how embarrassing would that be?  However, I now strongly believe that all jokes are rooted in the truth, and as it turns out, Raj wasn’t joking after all.

He laughs, a contrived-sounding laugh, and tells Simran she should know not to take him seriously by now. “Still don’t know how to make out how some men spend a lifetime with one girl! It’s a world full of pretty women. Someone has beautiful eyes, someone has good lips,” he says, as he glances at her eyes and lips.

“You boys are all the same.” She rolls her eyes in disdain.

Suddenly Raj turns serious. “But you’re one up on all of us,” he mocks. “You’re about to spend a lifetime with someone you haven’t even seen. That must be true love,” he scoffs, and this time, the disdain is rolling from him. Simran looks away in irritation, but Raj is on a roll and determined to pester her. “Think for a moment, what if you’re in love with someone?” From under the protection of the hypothetical, he asks further, “Why someone? Say you’re in love with me, and I’m in love with you too.”

He’s steely-eyed and brave as he forges forward – there’s no way you can turn from the scene (this is also because Shah Rukh is the best actor in the world. Fight me!!). “Then what will you do? Will you go back to marry that stranger? Or will you have the courage to have an affair with me?” (Note: after several viewings of this film I think that by ‘affair’ he means a relationship with him rather than the other guy, not pre-meditated adultery.)

There is nothing funny about his question now. Simran looks at him for several moments, conflict swirling in her eyes. Raj’s eyes are fixed on her; resolved and determined that she answer this. But the moment is broken when the train sounds, and Simran, with relief, only says “I don’t want to miss the train again.”

As she walks away, Raj says to himself: “If she’s in love with me, she’ll turn around.”

Simran, heartless as she is, continues walking. We are on the edges of our seats – up until this point, the audience has seen that Raj has a soft spot for Simran because he is kind underneath all of his teasings – but in this scene, we know that he loves her. Thankfully, she turns back at the last moment before boarding the train and gives him a smile.

His answering grin is nothing short of jubilant and the background theme music bursts out, sounding as joyful as the audience surely feels.

This scene is so romantic because we see Raj’s heart on the line and his feelings start to get real. He’s made himself vulnerable, and he’s dying to know if the girl of his dreams returns his feelings. It doesn’t hurt that he is strumming a banjo with musician-like angst and spewing bitter comments about arranged marriage at this point. You love him, and your heart goes out to him when he waits in agony to see if she’ll turn around.

At King’s Station, finally back where their journey began, Raj and Simran say goodbye after a month of hating and then liking each other. They’ve said goodbye to all of their friends and it’s just them left, so they stand, an awkward hum of tension in the air (I imagine). They both smile awkwardly and Simran says, “This is it. Back in London. How a month passed I’ll never know. Thank you for everything,” she tells him genuinely.

He just smiles and says, “It’s all right.”

“Friends?” She asks, and holds out a hand. Raj chuckles in response and shakes it. (OBVIOUSLY BECAUSE HE WANTS TO BE MORE THAN FRIENDS!) He has so little to say, which is odd for his character. So Simran starts to turn away until he pulls out the cowbell she had purchased on the trip that originally made them miss their train. “Thanks,” she says, giggling at the memory. Then, energetically: “See you!”

“Bye,” Raj says, sounding a lot more dejected (or indifferent, but I think it was dejected).

Simran turns back. “Raj! You haven’t given me your address. I’ll send you my wedding invitation.” She sounds hopeful as she asks, “You’ll come, won’t you?”

Raj chuckles that eerie un-funny chuckle again. He stares at her, as if to let her know he’s not joking anymore and that he never was. “No,” he says, simply. “I won’t come.”

He doesn’t say why. He doesn’t even try to say why. She doesn’t ask because his eyes tell her what he doesn’t say – that he’s in love with her, and he’s not going to come to her wedding to another man. He holds her eye contact, saying nothing and saying everything, as she looks back, momentarily stunned.

He makes a slight tsking sound as he smiles – a little, mysterious, melancholy smile – and backs away, leaving her wordless, rooted to the spot. 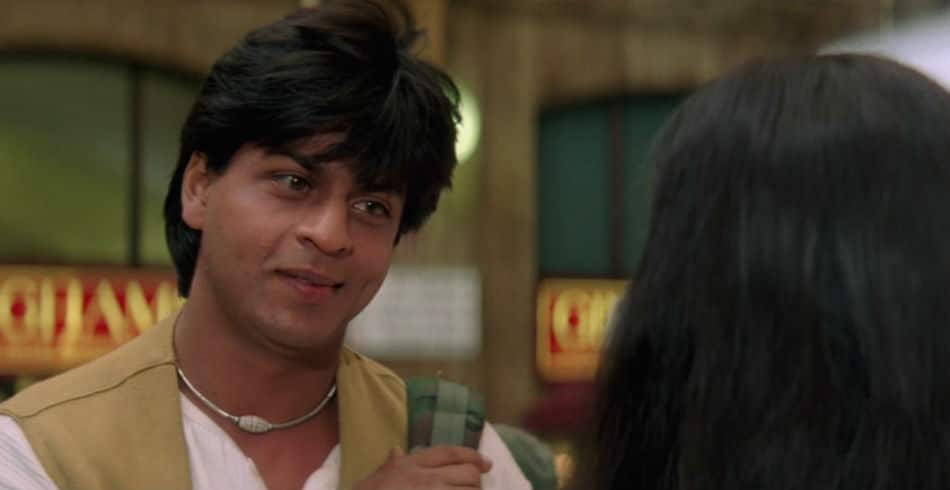 I loooooove this moment. It is my favorite in all of cinematic history because their eyes say so much. Raj says so little, doesn’t profess any love, yet his refusal said it all.  His smile is so knowing and bold as he backs away, and his eyes clue her into his feelings as she stands there, so shocked. Simran’s left in the middle of the station, as people walk around her frozen form. Music fades in and a song begins. “What’s come over my heart? Have I lost it?” the singer croons, and Simran walks on in slow motion, looking back in Raj’s direction. Ahhhh. The realization of love – what a moment.

The movie Dilwale Dulhania Le Jayenge can be found imprinted on my heart but also on Netflix and Amazon Video. How great is the acting in these moments? How is prolonged eye contact just so romantic? Did you sigh? Will you watch it because you definitely need to see what happens? Sound off below!

Our romance-themed entertainment site is on a mission to help you find the best period dramas, romance movies, TV shows, and books. Other topics include Jane Austen, Classic Hollywood, TV Couples, Fairy Tales, Romantic Living, Romanticism, and more. We’re damsels not in distress fighting for the all-new optimistic Romantic Revolution. Join us and subscribe. For more information, see our About, Old-Fashioned Romance 101, Modern Romanticism 101, and Romantic Living 101.
Pin this article to read later! And make sure to follow us on Pinterest.
By Amirah Yasin on October 21st, 2015