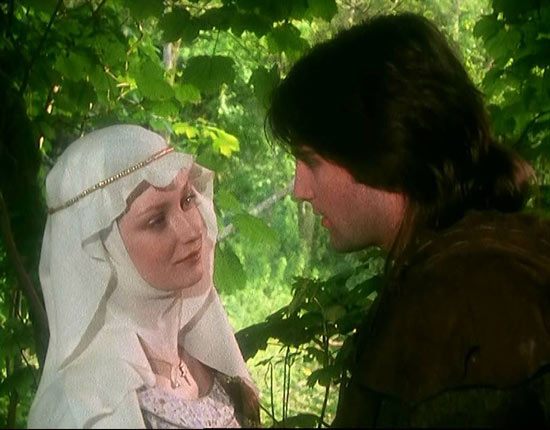 The Series: Robin of Sherwood

The Episode: Robin and the Sorcerer

Robin of Sherwood was a British historical fantasy drama that ran between 1984 and 1986 on ITV.  This series expanded on the more mystical and pagan aspects of the legend.  It used elements of English folklore to evoke a magical feel which was elevated by the use of popular folk band Clannad whose breathy vocals and immersive sound perfectly matched the atmospheric take on the legend.  Robin of Sherwood is known for being the first adaptation of the story to include a Saracen character as one of the merry men.  A choice that would influence later productions, most notably Robin Hood: Prince Of Thieves.  With a cast of well-rounded characters, great scripts and entertaining villains, the series is still considered by many to be one of the best adaptations of the tale despite some aspects that may appear dated to modern audiences. 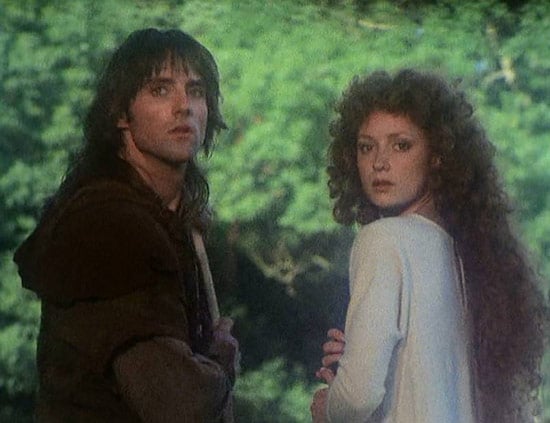 Robin Hood and Maid Marian are one of the greatest literary pairings in existence and also one of the most enduring.  Their meeting is important because it sets the tone of the entire relationship.  Robin of Sherwood was the first adaptation to present Marion not only as a fully fleshed out character but also as an active member of the merry men.  The chemistry between Michael Praed and Judi Trott is strong in the series.  While the initial courtship is quite brief, it was handled believably and unfurled realistically.  Once married their love story remained deeply romantic, never becoming dull or fraught for the sake of drama. 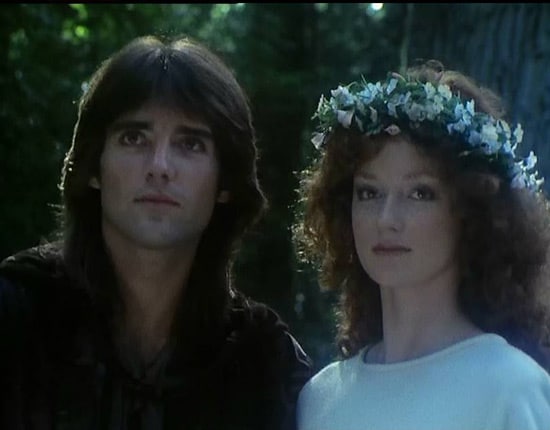 The two meet during Robin’s escape from the Sheriff’s dungeons after he and his adoptive brother Much are caught hunting the King’s deer.  During the escape, Robin is separated from his companions.  Forced to run back into the castle to try and escape the guards who have just been roused, Robin finds himself trapped.  The only way out is through a closed wooden door.  With the sound of guards approaching from both sides, Robin lets himself through the door and into the room beyond.

Expecting a way out, Robin is much surprised to find himself instead in the bedchamber of a young woman.  Startled, Marian pulls up the covers looking at the intruder with some alarm. Out of breath, Robin asks her not to reveal him. 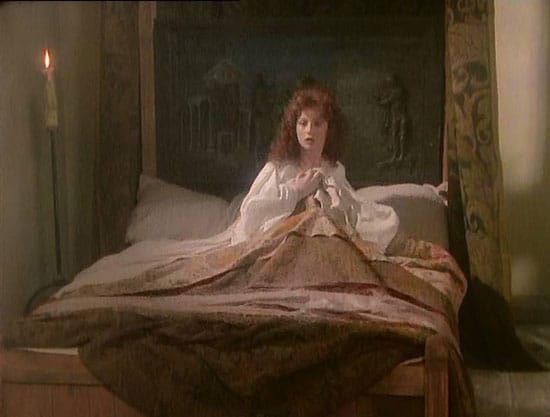 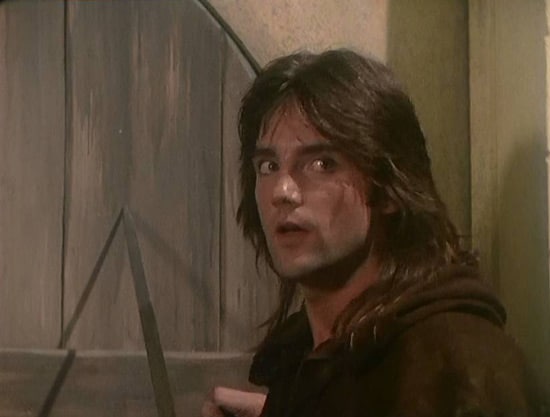 She shakes her head. 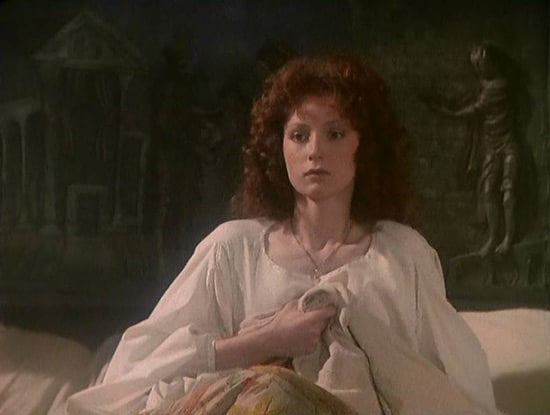 Robin: I won’t harm you.

Guy of Gisburne comes to the door. 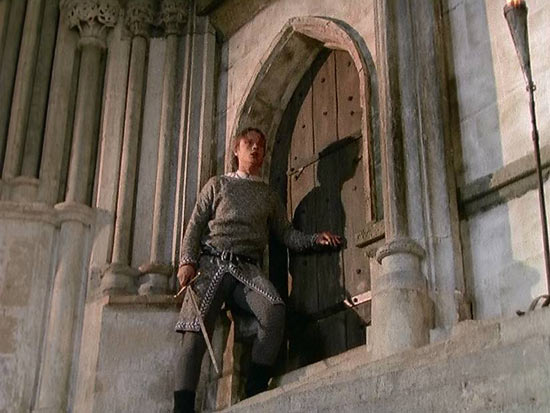 Guy of Gisburne: My Lady

A look passes between Robin and Marian.  She chooses not to reveal his presence. 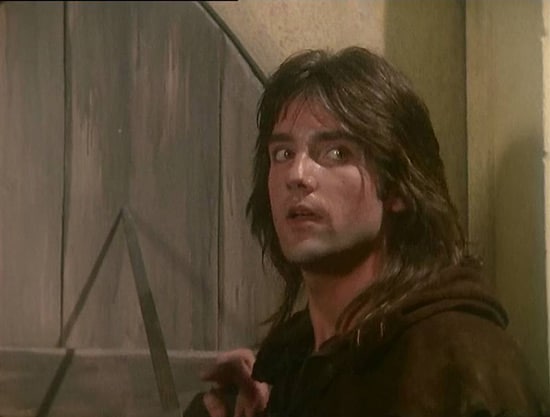 Marian: What is it?

He announces that prisoners have escaped asking that she lock her door for her own safety.  Marian looks at Robin realising who he must be.  Robin bolts the door.  Gisburne leaves.  Robin examines the drop from her window, seeking a way out. He finds a door leading up to the roof but hesitates. 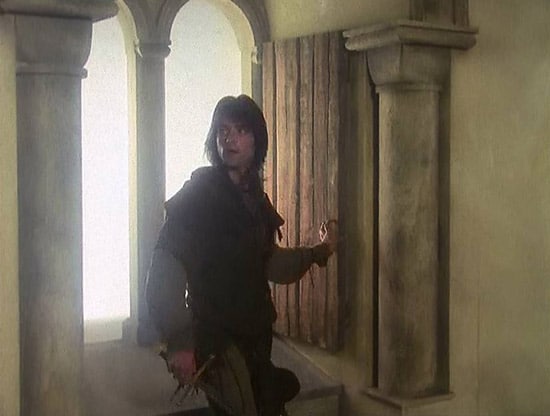 Robin: Why didn’t you call out?  Why?

Marian: He’d have killed you.

Robin: You’re not afraid of me. 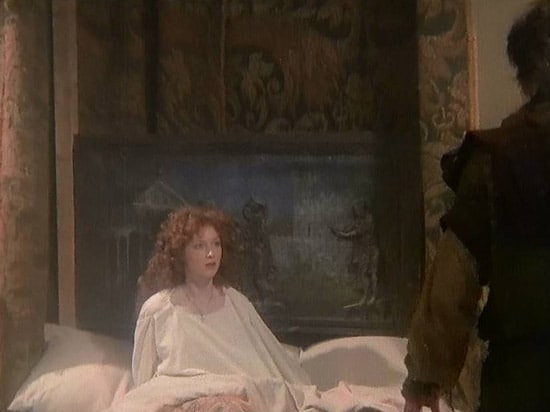 She shakes her head, with a certain amount of stubbornness.  He approaches and sits on the edge of her bed.  She edges away, unsure of his intentions but intrigued.

Robin: Who are you?

Marion: My name is Marion. 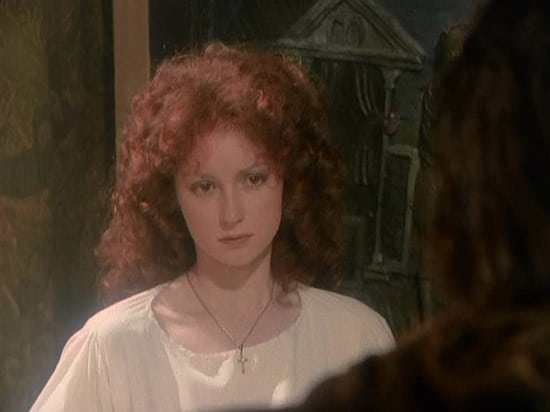 Marian: Where will you go?

She expresses concern but also a curiosity.  She is clearly a little enamoured with him.

Robin: Yes, but they won’t catch me.

Marian: How can you be so sure?

Robin: Because I know the forest and they don’t. 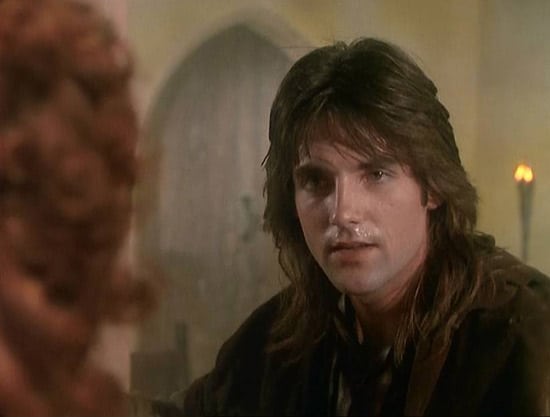 He smiles, seemingly dazzled by her beauty.

He stands up and goes to leave then looks back once, pulling up his hood in order to conceal his face. 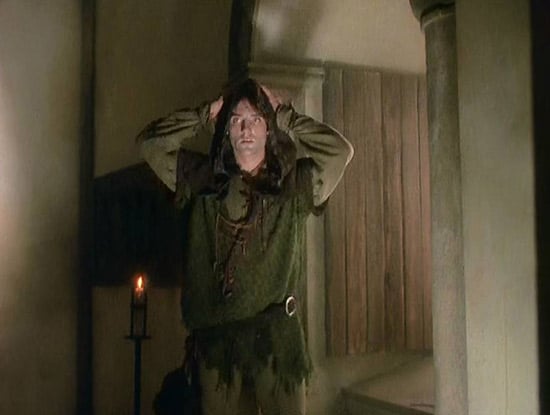 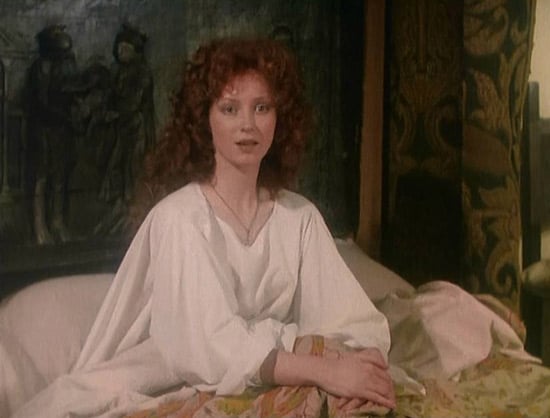 She realizes at that moment that Robin could be the hero that the Sheriff of Nottingham was warned about earlier in the episode.

Have you seen this adaptation of Robin Hood? What did you think of the portrayal of one of literature’s more famous love stories? Is this your favourite, or do you prefer a different Robin and Marion?

Our romance-themed entertainment site is on a mission to help you find the best period dramas, romance movies, TV shows, and books. Other topics include Jane Austen, Classic Hollywood, TV Couples, Fairy Tales, Romantic Living, Romanticism, and more. We’re damsels not in distress fighting for the all-new optimistic Romantic Revolution. Join us and subscribe. For more information, see our About, Old-Fashioned Romance 101, Modern Romanticism 101, and Romantic Living 101.
Pin this article to read later! And make sure to follow us on Pinterest.
By Elinor Cackett on August 22nd, 2015