“There are only two ways to kill Unbounded, and fire isn’t one of them—as law school dropout Erin Radkey learns the hard way. By fluke of a recessive gene, she has become Unbounded, a nearly immortal being with paranormal abilities.

Erin’s Change separates her from her loved ones and alters everything she believes to be true. A week earlier she was considering a marriage proposal; now she contemplates the best way to stay alive. Caught in a battle between two Unbounded groups, she is also hunted by a secret mortal society sworn to eradicate the Unbounded gene.

As Erin plunges into this dangerous new life, she must carve out her own place in the madness, protect her mortal family, and decide which group she should join. Her unique ability is vital to both groups in the race to secure an identification software that spells death for all Unbounded—or enslavement for the entire mortal world. Some will stop at nothing to use Erin as one more pawn in a battle that has spanned centuries. Erin’s undeniable attraction to Ritter Langton, whose family was massacred by opposing Unbounded two hundred and forty years ago, complicates her choices. There are no second chances. Death, life, or love—Unbounded always play for keeps.” 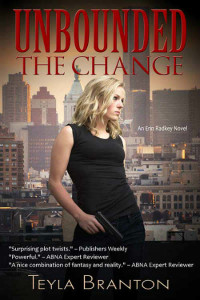 Discovering clean yet adult urban fantasy is like finding a needle in a haystack, but somehow this book discovered me…accidentally that is. The Change just landed in my lap like fate, beckoning me with its finger to read it.

So, I figured why fight fate? Needless to say, I finished Teyla Branton’s novel in a day. This book is pure addiction (if you like the genre), each chapter ending with the promise (or even cliffhanger) of something even more exciting in the next.

Adventure, romance, entertaining action, good characterization, an interesting plot, and unique world-building all make for an excellent debut to the Unbounded series.

What is even more fantastic about The Change is that it wasn’t weighed down by pointless love scenes. The novel (and its romantic tension) had to stand on its own without it.

In fact, it had to be so strong to be able to compel fans of the genre without feeling like YA either. Branton succeeds at this brilliantly; the romance between Erin and the disillusioned Ritter (who I love) was palpable and captivating.

I rooted for them with fervor, anticipating Ritter’s return every time Branton focused elsewhere. Something about his emotional depth intrigued me and held my interest.

Erin’s narrative voice and internalization were also captivating. With the flaws Branton used to flesh out Erin as a character, I could almost believe she was real.

While Erin has newfound and sought-after powers, she is not perfect nor is she amazing at everything she does. She makes mistakes, and in a couple of powerful moments in the novel (that I won’t spoil), she pays for those mistakes.

The familial relationship with Erin and also the Unbounded further give this novel that extra complexity to the protagonist and to the other characters as well. The focus on family and the strength found in all forms of love was particularly emotional and even touching at times.

RELATED: RoseBlood YA Book Review – A Modern Retelling of Phantom of the Opera

Was this a perfect urban fantasy novel? No. Some of the dialogue and prose felt awkward in the beginning particularly, while I also wanted just a little more to explain why Ritter falls for Erin.

Why after all his couple hundred years of choosing to be alone does he change his mind? What is it about Erin that alters him?

Still, this is only a minor issue and could easily be resolved in book 2 when we get to know Ritter even deeper than we did previously. This is Erin’s story after all.

Turning back to fate once more (since this is a fantasy novel), I believe that sometimes we uncover a book that works as a fantasy portal, but only if you just so happen to stumble into the fantastic by accident at just the right moment, like that of Lucy discovering the wonderful wardrobe into Narnia or Alice falling down the rabbit hole into Wonderland.

When that happens, you just have to take a leap and become part of that world. In the end, there’s something magical about the unexpected.

So, if you’re looking for an entertaining Urban Fantasy read to enjoy at the beach (or under the covers until 2 in the morning), then this might just be the perfect fit. I look forward to entering the world of the Unbounded once more in Book 2.