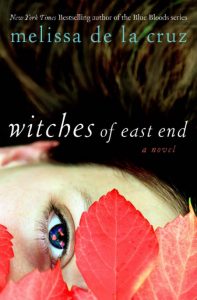 “The three Beauchamp women–Joanna and her daughters Freya and Ingrid–live in North Hampton, out on the tip of Long Island. Their beautiful, mist-shrouded town seems almost stuck in time, and all three women lead seemingly quiet, uneventful existences. But they are harboring a mighty secret–they are powerful witches banned from using their magic. Joanna can resurrect people from the dead and heal the most serious of injuries. Ingrid, her bookish daughter, has the ability to predict the future and weave knots that can solve anything from infertility to infidelity. And finally, there’s Freya, the wild child, who has a charm or a potion that can cure most any heartache.

For centuries, all three women have been forced to suppress their abilities. But then Freya, who is about to get married to the wealthy and mysterious Bran Gardiner, finds that her increasingly complicated romantic life makes it more difficult than ever to hide her secret. Soon Ingrid and Joanna confront similar dilemmas, and the Beauchamp women realize they can no longer conceal their true selves. They unearth their wands from the attic, dust off their broomsticks, and begin casting spells on the townspeople. It all seems like a bit of good-natured, innocent magic, but then mysterious, violent attacks begin to plague the town. When a young girl disappears over the Fourth of July weekend, they realize it’s time to uncover who and what dark forces are working against them.

With a brand-new cast of characters, a fascinating and fresh world to discover, and a few surprise appearances from some of the Blue Blood fan favorites, this is a page-turning, deliciously fun, magical summer read fraught with love affairs, witchcraft, and an unforgettable battle between good and evil.”

With a television adaptation of the Witches of East End book series just around the corner (premiering October 6th on Lifetime), I decided to sit down and read at least the first installment about the three Beauchamp women of the Hamptons. I was not disappointed. Almost instantaneously, bestselling YA author Melissa de la Cruz’s adult series, reiterates why she continues to top many bestseller lists. Thanks to her gift of weaving a delightfully and devilish fun tale, Witches of East End is an entertaining romp that never has a dull moment. A bewitching love triangle between Freya and the smoldering Killian and awkward, yet sweet Bran, three strong female characters, and a compelling mystery all hold you charmed right up until the very last page (even finishing with a TV like cliffhanger but don’t worry the next two books are already out).

Some novels take a few chapters to capture my interest. Witches of East End only took a few sentences and that says something about Melissa de la Cruz’s gift with words. It is easy to visualize the world of North Hampton, each passage capturing the essence of the town the witches live in because the descriptions ring true.  The same can be said for the characters. They come to life, each new phrase or twist of the pen gets taken over by these three women breathing their own life into the novel.

Thanks to her gift of weaving a delightfully and devilish fun tale, Witches of East End is an entertaining romp that never has a dull moment.

The three Beauchamp women: Freya (the younger sister), Ingrid (the older one), and their mother Joanna each have distinctive personalities and gifts. While the three women are immortal, they are also barred from using their powers. This banishment from magic gives the women a true chance to shine as characters, each inwardly struggling with the idea of doing one spell and then another. No harm could come to them, right? Each woman’s strive for identity as a witch, a sister, or as a mother, make for a wonderful read thanks to the novel’s focus on family relationships.

Then there are the romances. At the beginning of the story, Freya (the sensual and love potion type of witch) is at her engagement party to the good and rich Bran Gardiner when she meets his brother Killian. Immediately, she is drawn to him but can she keep away and do we even want her to? Certainly the relationship between Killian and Freya has the best development out of all the romances (Bran needed to be rounded out just a little more) and will likely capture the hearts of most of the readers though I would have preferred more emotional intimacy over the physical intimacy. Who does she choose in the end? Well, I’m not telling but Freya’s emotional turmoil between the two men creates good character development as she makes questionable choices.

Ingrid, the older sister, holds a stronger place in my heart (and it’s not because I too am a shy librarian) because her story centered more on the mystery. Moreover, the walls she built up around her heart for several hundreds of years to keep love at bay intrigued me. I loved that this story could include a character so cold and rigid on the outside but rich inside. Furthermore, I appreciated that there was a character not all about her sexuality. It made for a dynamic contrast between the two sisters. The romantic possibilities between her and the cop Matt also worked because it was all about getting inside Ingrid’s head and secret feelings no one else could see. Nevertheless, like Bran, I still find that Matt needed just a little more development (something quite easy since this was only book one in the series).

Joanna, the mother of this family of witches, also has a compelling story and good characterization. Her longing for her son long gone transferred into a friend’s four year old son is heartwarming. Even Joanna’s selfish behavior to keep the girls’ father away from them gives greater depth to this strong woman. I have to say that I am kind of hoping we get more of the ex-husband in the second and third installment.

Aside from setting, characterization, and romance, the story itself is gripping and mysterious, even a little gothic in a scene or two. When in North Hampton, people start going missing, odd illnesses arise, and Ingrid notices a strange silver mass keeping women from getting pregnant, the three witches must discover who or what is causing the destruction. Something wicked is amiss and only the three Beauchamp women can solve the mystery and save the day. Certainly, the intrigue never loses momentum or drifts into boring oblivion.

Witches of East End was not without some problems however. While I definitely appreciated the story’s connection to the Salem Witch Hunts and Norse mythology, the back story of the mythology needed a little more filling out and may be confusing to those without knowledge of the particular myths incorporated into the story.  Still it all gels nicely together for the most part and the merging of history and myth worked seamlessly.  The ending also proved problematic in that it felt a little rushed. Everything happened so quickly that I just wanted a little bit more. Nevertheless, the story leaves you with just a touch of magic; it leaves you in anticipation of the next book in the series. So if you love a good book about witches with strong romantic elements (sometimes it can get a little racy), this is a great choice and a good way to spend your afternoon.

Since this has already been adapted into a TV show and will premiere soon, all I can do is agree with this choice. All of the small problems I encountered in this book would transfer fabulously on television because the writers will have more time to fill the mythology out and develop all the characters to an even greater degree. I personally can’t wait for October 6th to see how it has been interpreted! Hopefully, it will be a good mix between Charmed, Practical Magic, and mostly all Melissa De La Cruz’s Witches of East End.

Warning: While Melissa De La Cruz is typically known for writing YA, this book is most definitely adult in content. There were a few unnecessary sex scenes in the story.

Our romance-themed entertainment site is on a mission to help you find the best period dramas, romance movies, TV shows, and books. Other topics include Jane Austen, Classic Hollywood, TV Couples, Fairy Tales, Romantic Living, Romanticism, and more. We’re damsels not in distress fighting for the all-new optimistic Romantic Revolution. Join us and subscribe. For more information, see our About, Old-Fashioned Romance 101, Modern Romanticism 101, and Romantic Living 101.
Pin this article to read later! And make sure to follow us on Pinterest.
By Autumn Topping on September 20th, 2013