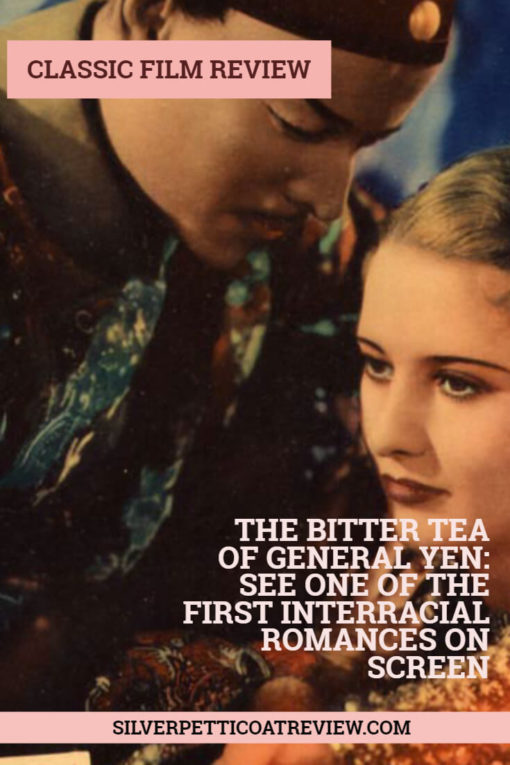 Frank Capra directs this shocking 1933 love story between a Chinese warlord and a Christian missionary.

Directed by Frank Capra, The Bitter Tea of General Yen is a relatively forgotten pre-Code film with social relevance, religious cynicism, violence, and a shocking interracial romance between a Chinese warlord and a Christian missionary. Indeed, this is not the type of movie one thinks of when referencing a Capra classic. It’s a Wonderful Life it is not. But that’s what makes this movie so fascinating. Not only is it different from Capra’s later films, but it’s also a love story ahead of its time.

So, if you haven’t seen this lesser-known romance, you’ll want to watch The Bitter Tea of General Yen as soon as you can. It’s worth seeing one of the first interracial romances on screen.

The Bitter Tea of General Yen is an American film starring Barbara Stanwyck, Nils Asther, and Walter Connolly. Based on Grace Zaring Stone’s 1930 novel, the film tells the story of a young American missionary, Megan, engaged to another idealistic missionary working in Shanghai.

She joins him in Shanghai only to be caught up in the Chinese Civil War while they attempt to rescue orphans. Separated from her fiancé, the dangerous Chinese warlord, General Yen, rescues her.

The story then plays out similarly to a Beauty and the Beast tale. He quickly falls in love with Megan, despite her prejudices against Chinese culture and Eastern ideas. The General then invites her to dinner every night while keeping her locked away in her fancy room.

Meanwhile, she befriends one of the warlord’s lovers, Mah-Li (Toshia Mori), a woman in danger of execution for treason.

Soon, Megan becomes drawn to General Yen, despite his dangerous persona. Like any good Byronic Hero, General Yen begins to place his love for Megan above everything else in his life. But will his love for her lead to his demise? And will she recognize her feelings for this Chinese man before it’s too late?

Trust me when I say this movie is enthralling. If you haven’t experienced watching a pre-Code film, this is a perfect one to watch. You might be amazed by how different a pre-Code film feels from movies only a year later. A few times, my jaw dropped by some of the content in this film.

What’s most shocking about The Bitter Tea of General Yen, however, is the love story itself. Interracial love stories were mostly unheard of in this period and not socially acceptable. And while a Chinese man isn’t playing the Chinese warlord (Asther was Swedish), the message of the film is scandalous for the time. A Chinese man is in love with a white, Christian missionary woman and we’re supposed to root for them!

Make no doubt about it: this movie is shocking.

A Reflection of Its Time…Sort Of

Now, this movie, while revolutionary in some respects, isn’t without racism (IE: Asther’s makeup) and uncomfortable dialogue. So, be aware. That said, the strange, seductive appeal of this movie is undeniable. And positive messages are present despite its imperfections.

Fun Facts About The Bitter Tea of General Yen

The movie itself also has an intriguing history. It was the first film to play at Radio City Music Hall when it premiered on January 6, 1933. The Bitter Tea of General Yen, however, was a commercial failure and has only begun to receive more critical acclaim in the 21st century. At the time, Stanwyck blamed the backlash on racism and was surprised by the adverse audience reaction.

The Bitter Tea of General Yen not only includes a compelling and unusual love story, but it’s also a beautiful, romantic film to see. Capra brings his notable skill to the movie, using photographic tricks and an arty filmmaking style. And despite a smaller budget, the set designs are gorgeous, the costumes stunning, and the war scenes ambitious.

Plus, Stanwyck and Asther sizzle onscreen together. I couldn’t keep my eyes away from them.

Overall, if you’re interested in the evolution of interracial romances in film, The Bitter Tea of General Yen is a must-see movie. Beyond that, it’s a fascinating movie with compelling performances from a young Barbara Stanwyck and the underrated Nils Asther.

And while Frank Capra is one of the best filmmakers of all time, one can only imagine how much more he could have created with more movies like this one. The Bitter Tea of General Yen is genuinely a film ahead of its time, making it a shocking and intriguing romance to watch.

Content Note: While unrated, it would likely be PG-13. Scenes of violence happen, violent images in the background are present, and there is some sensuality and other adult themes.

Where to Watch: Buy on DVD. TCM also airs the film sometimes, so keep an eye on listings each month.

Have you seen the classic film, The Bitter Tea of General Yen? What are your thoughts on this interracial romance movie from Frank Capra? Let me know in the comments.