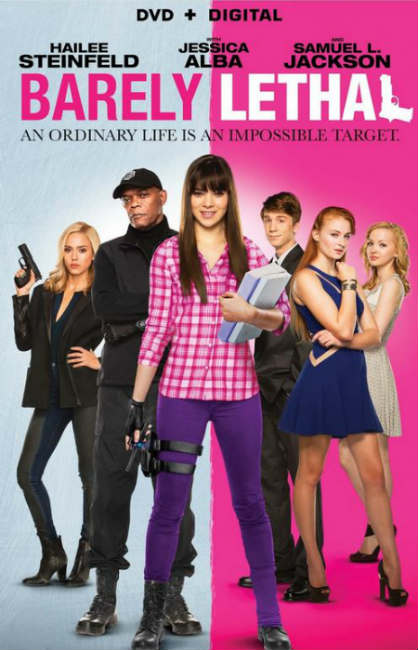 Barely Lethal is a film that doesn’t take itself too seriously and neither should you. There’s humor, action, romance and lots of fun to be had. However, while the film is entertaining and loves paying homage to the teen romantic comedies of the past (Bring it On, Mean Girls), Barely Lethal isn’t quite as great as it could have been. Still, with Hailee Steinfeld (True Grit) as the Buffy inspired leading lady and an all-star supporting cast including Samuel L. Jackson, Jessica Alba and Sophie Turner (Game of Thrones), it may be worth a watch. You can catch this light-hearted teen spy comedy (that probably would have fared better a decade ago) for free on Amazon Prime.

Barely Lethal tells the story of Megan Walsh (also known as Agent 83) who has been trained to be an assassin since she was a child. Her boss (and at times father figure) is Hardman played by the always entertaining Samuel L. Jackson. However, once she’s allowed to go on solo missions amongst actual people, she finds herself longing to live the normal life of a teenager. She reads teen magazines during important assassin meetings and dreams of finding love like Torrance and Cliff in Bring it On (which she watched secretly while on a mission). So, during a failed mission to assassinate the villainous Victoria played by Jessica Alba (clearly having a blast), Megan takes her chance and fakes her death. She then enrolls in a student exchange program where she stays with the family of her choice. But high school life isn’t easy for a trained assassin and spy! What follows is a lot of comedy, high school romance, action and bad guys all in the guise of a teen comedy.

The script is also nostalgic and at times even funny – reminiscent of teen shows from the ‘90s and teen romantic comedies from the early ‘00’s. So if you’re partial to that time period, then you may really like this film despite its flaws.

As a whole, the film is fun to watch with a refreshing leading lady and an enjoyable supporting cast. The script is also nostalgic and at times even funny – reminiscent of teen shows from the ‘90s and teen romantic comedies from the early ‘00’s. So if you’re partial to that time period, then you may really like this film despite its flaws. Certainly, Barely Lethal can be cheesy and over the top with some of the humor falling flat. But the high school film clichés presented are done in a tongue and cheek way and Barely Lethal is at the least never boring. Plus, Hailee Steinfeld and Sophie Choice both have a lot of potential to become huge stars. Their performances alone may make this film worth your time.

On a fun note, if you were a Dark Angel fan then you’ll enjoy seeing Jessica Alba in this action role throwback performance. It’s not a far leap to think that a little over a decade ago, it would have been Jessica Alba playing this part. There is a little bit of one generation passing on the torch to the next in the film, which is a nice little wink.

Overall, if you’re looking for a couple hours of escapist entertainment, then Barely Lethal may be a great choice; especially if you love teen romantic comedies. Be warned, however, there is some crude humor and language in this PG-13 film.

Our romance-themed entertainment site is on a mission to help you find the best period dramas, romance movies, TV shows, and books. Other topics include Jane Austen, Classic Hollywood, TV Couples, Fairy Tales, Romantic Living, Romanticism, and more. We’re damsels not in distress fighting for the all-new optimistic Romantic Revolution. Join us and subscribe. For more information, see our About, Old-Fashioned Romance 101, Modern Romanticism 101, and Romantic Living 101.
Pin this article to read later! And make sure to follow us on Pinterest.
By Amber Topping on September 22nd, 2015