Sometimes as a Netflix patron, we discover a kind of hidden gem. One of the latest discoveries is a little mystery called Agatha and the Truth of Murder.

Agatha and the Truth of Murder (2019) Review

In 1926, for 11 days, Agatha Christie (Ruth Bradley) disappears. During this time, her life is in shambles. Agatha not only faces writer’s block, but she’s also experiencing a personal crisis when her husband demands a divorce. However, her life changes when Mabel (Pippa Haywood) walks into her study.

Mabel arrives with a riddle. Her best friend and soul mate died several years ago. No one but Mabel believes it to be murder. At first, Agatha is put off by this stranger, but eventually, struggling with her new novel, Agatha is intrigued. Together, the pair set up an elaborate plan to bring together their suspects, and entrap a murderer! It’s a fun, fictionalized account for those who love a good Agatha Christie adaptation.

Needless to say, as a fan of Christie mysteries, I was thrilled to see this on the streaming service. Given how popular original Christie adaptations are on streaming services like Amazon or Acorn TV, to find Agatha and the Truth of Murder, a movie about the author of those macabre stories is a fun find. 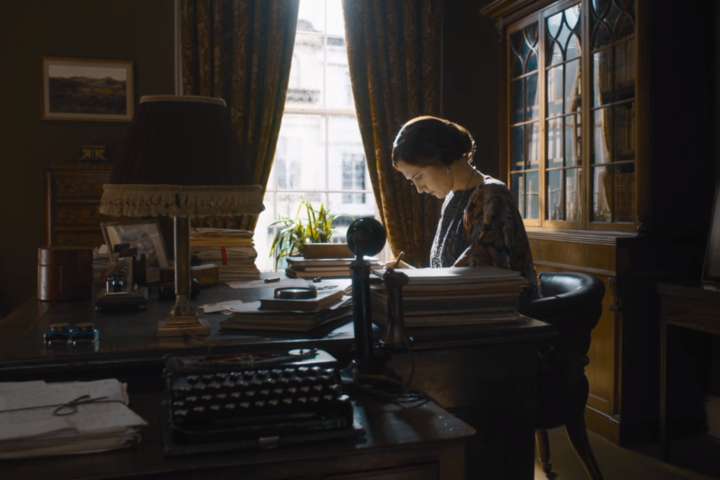 What’s even more interesting is Agatha did indeed disappear for 11 days in 1926. Still, to this day, no one knows why she did or where she was. Furthermore, this film even specifies (in the end credits) this isn’t endorsed by the official branding of the author. Appropriately, like its titular author’s profession, these eleven days remain in shadowed mystery. That all being said, the real-life mystery certainly makes for a good premise for a fictional movie.

Though Agatha and the Truth of Murder isn’t extremely dynamic, it is good. The pace is slow, and the story isn’t quite as interesting as I’d anticipated. Overall, it’s a well-produced film. It’s one of those period dramas I suspect will go on with little fanfare. The story also leaves us with bittersweet emotions just because of her heartbreak. Still, in all other respects, there’s the promise of good things. The cast is solid, and the costumes pretty, but it’s still startling to see Agatha go from color and soft hairstyles to drab and unassuming.

Overall, for those who admire period drama or any of the Agatha Christie adaptations, this is a must see. It’s an absorbing story (kind of in the way a good game of Clue is). Plus its script offers a tiny window into the life of Agatha Christie, even if it does take fictional liberties. I like to think the British mystery maven would approve.

Content: Apart from some “tense” moments, this drama is appropriate for the interested viewer. Netflix’s rating is TV-14.

You can currently watch Agatha and the Truth of Murder on Netflix. It’s also available through Amazon UK.

Our romance-themed entertainment site is on a mission to help you find the best period dramas, romance movies, TV shows, and books. Other topics include Jane Austen, Classic Hollywood, TV Couples, Fairy Tales, Romantic Living, Romanticism, and more. We’re damsels not in distress fighting for the all-new optimistic Romantic Revolution. Join us and subscribe. For more information, see our About, Old-Fashioned Romance 101, Modern Romanticism 101, and Romantic Living 101.
Pin this article to read later! And make sure to follow us on Pinterest.
By Rissi JC on March 11th, 2019