The Accidental Husband is a little-known rom-com with an impressive cast, including Uma Thurman, Colin Firth, Jeffrey Dean Morgan, Isabella Rossellini and Sam Shepard. It was initially theatrically released in Britain, but never made it to North American theaters, since the distributor went bankrupt. So, it never got its international release and was relegated to DVD distribution. It’s rather a shame since The Accidental Husband is absolute absurdist fun. Yup, it’s ridiculous and oh so fun.

The Unravelling of the Straight Man’s Ordered Life

It’s one of the oldest comedic tropes going – the straight man and the joker. In the case of The Accidental Husband, it’s a straight woman, the Love Doctor, Dr. Emma Lloyd (Uma Thurman), a celebrated radio talk show host and author, whose ordered life falls into chaos. She’s a love guru, who espouses pragmatics and practicalities and compatibility lists when it comes to love. She has no time for heady unpredictabilities and so-called chemistry. Her life and career are well managed. She’s set to marry the very affable and compatible Richard (Colin Firth), a publisher. She’s launching a new book. It’s all going swimmingly until it doesn’t.

After Emma advises a bride-to-be with doubts, who phoned into her radio talk show, to reconsider her forthcoming nuptials, the jilted groom – the joker – takes his revenge. Patrick Sullivan (Jeffrey Dean Morgan) is an angry firefighter, who gets it in his head that Dr. Emma Lloyd is to blame for the loss of his fiancée. And in a rather ridiculous premise – wait for it – he enlists his computer savvy neighbor to hack into government records and marry Emma Lloyd to himself. Yes, according to official records and government documents, Emma is now married to Patrick – a man she has never met.

Attempting to get her marriage license, Emma is informed that she is already married and must annul the first marriage if she is to proceed with her marriage to Richard. Armed with a stack of bureaucratic annulment papers, she sets out to find Patrick Sullivan. Let the comedic mishaps, the unraveling and maybe (hint, hint, nudge, nudge) the unexpected chemistry between a certain firefighter and a radio host begin. 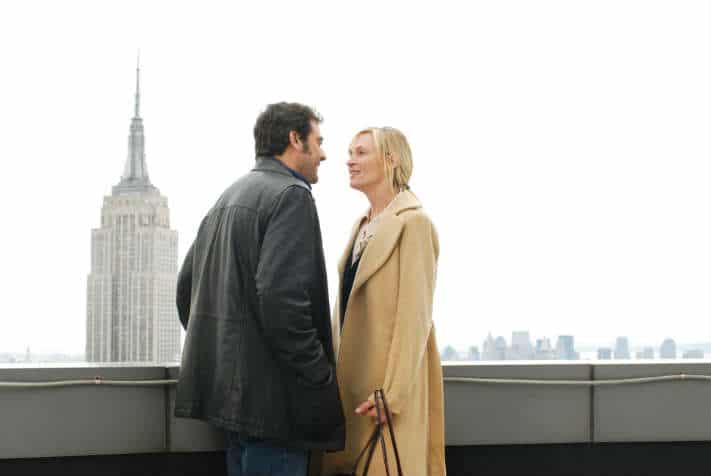 The Accidental Husband is indeed ridiculous. The whole premise is absurd. And in less capable hands, the film could have been really, really bad. But it’s not. The acting is generally fine in this piece. Uma Thurman is utterly charming as the frazzled Emma, clinging to order, but maybe opening up to the joys of chaos in her life. Colin Firth, who’s being set up to be cuckolded here, is endearing in his rather limited, admittedly limpish role (the fangirl in me is screaming how wrong it is to dump Mr. Darcy!). Jeffrey Dean Morgan plays rather wonderfully the roguish, down-to-earth Patrick, whose own revenge plans are thwarted by burgeoning feelings. Sam Shepard is a treat as Emma’s dad. Isabella Rossellini is a delight in her small, but integral role. Yeah, it’s pretty sound stuff.

And yeah, it’s got one of the most ridiculous rom-com plot premises going, but you’ll find yourself swept up in it all. Yeah, it’s absurd. Yup, it’s far-fetched. You betcha, it’s silly beyond all get out. Uh-huh, it’s predictable in its rom-com way. Yes siree, the critics panned it. But, gosh darn it, it’s fun.

Where to Watch: DVD, Netflix DVD. You can buy on Amazon.

Our romance-themed entertainment site is on a mission to help you find the best period dramas, romance movies, TV shows, and books. Other topics include Jane Austen, Classic Hollywood, TV Couples, Fairy Tales, Romantic Living, Romanticism, and more. We’re damsels not in distress fighting for the all-new optimistic Romantic Revolution. Join us and subscribe. For more information, see our About, Old-Fashioned Romance 101, Modern Romanticism 101, and Romantic Living 101.
By Jessica Jørgensen on December 18th, 2017