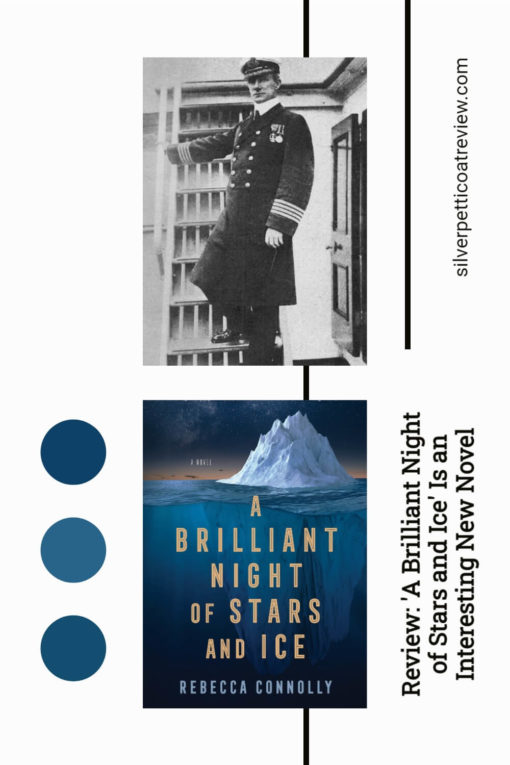 Disclosure: I received a free copy of A Brilliant Night of Stars and Ice from the publisher via Netgalley. All opinions in the book review are my own.

OFFICIAL DESCRIPTION OF A BRILLIANT NIGHT OF STARS AND ICE:

“Captain Rostron’s decisive and heroic actions as he prepared his crew for what they were about to encounter was inspirational and heartrending. I’ve found a new hero in a man who never hesitated in doing the right thing.”—Heather B. Moore, author of The Paper Daughters of Chinatown

Based on the remarkable true story of the Carpathia—the one ship and her legendary captain who answered the distress call of the sinking Titanic.

Shortly after midnight on April 15, 1912, the captain of the Carpathia, Arthur Rostron, wakes to a distress signal from the Titanic, which has struck an iceberg on its maiden voyage. Though information is scarce, Rostron leaps into action, determined to answer the call for help. But the Carpathia is more than four hours away, and there are more questions than answers: Will his ship hold together if pushed to never-before-tested speeds? What if he also strikes an iceberg? And with the freezing temperatures, will there be any survivors by the time the Carpathia arrives?

Kate Connolly is a third-class passenger on Titanic, and she is among the last to receive instruction and help after it hits an iceberg. Despite the chaos of abandoning ship, Kate is able to board a lifeboat, though after seeing the Titanic sink into the abyss and hearing the cries from hundreds of people still in the water, she wonders if any rescue is even possible.

Told in alternating chapters from both Captain Rostron and Kate Connolly, this novel is a compelling, heart-pounding account of two eyewitnesses to an epic disaster. Rostron’s heroic and compassionate leadership, his methodical preparations for rescue, and his grit and determination to act honorably and selflessly to save lives and care for the survivors, sets the course for this awe-inspiring story.

A BRILLIANT NIGHT OF STARS AND ICE BOOK REVIEW

It’s been 110 years since the sinking of the Titanic, and it still captures our attention. Rebecca Connolly has written a fascinating new historical fiction novel. It’s based on the true story of the Carpathia and her courageous captain, Arthur Rostron, the man who answered the distress call of the Titanic.

A Brilliant Night of Stars and Ice also follows the perspective of Kate Connolly, a third-class passenger on Titanic, and how she survives and then boards the Carpathia as she deals with the tragic aftermath.

Connolly does a fine job intertwining the stories of both Rostron and Connolly, and I quickly read the story – mostly to learn more about the Carpathia – an integral part of Titanic’s history that tends to get overlooked.

A Brilliant Night of Stars and Ice is a well-researched page-turner and a lovely tribute to Titanic’s history.

THE CARPATHIA – AN INTERESTING HISTORY

Captain Rostron is the hero, and his actions before, during, and after the sinking of the Titanic are truly admirable. It was interesting to read about his preparations for rescuing passengers and his grit in the face of disaster.

Kate Connolly presents a more relatable perspective on the historical events and is just as intriguing in a different way.

RELATED: Movies Like Titanic: 50 Epic Romances to Fall in Love With

Before reading this book, I didn’t know anything about Kate Connolly and Captain Rostron (two very real people from history), but I admire them now that I do – even if this book is historical fiction.

Ultimately, I liked this book because Connolly found a new way to explore the famous tragedy but did so without exploiting the real people who lived it. And I appreciate the lack of sensation.

Connolly’s attention to detail allows readers to understand the historical events as they unfold, and I never felt bored while reading.

While the historical details are excellent, I wanted more characterization and story. I also wanted a more prolonged buildup to the tragedy, so I felt like I knew the supporting characters more before the events unfolded.

However, I still enjoyed the book, and I recommend it to anyone who wants a respectful exploration of the Carpathia and the Titanic.

Overall, A Brilliant Night of Stars is a quick, enjoyable read. It’s great for anyone wanting to learn more about the Carpathia and its fascinating captain, Arthur Rostron.

While I would have liked more time getting to know the characters before the tragic events of the Titanic started, it’s still a respectful tribute to the actual people aboard the Titanic and the Carpathia and worth a read if you’re interested in the history and the real people!

The book releases on April 5, 2022. Check out the official website for buy links here.

A Brilliant Night of Stars and Ice would make an intriguing period drama miniseries akin to Julian Fellowes’ Titanic series.

A TV miniseries could take more time exploring the characters, the tragedy, and then the rescue giving Rostron and Connolly a well-deserved fictionalized tribute on the small screen.

Content Note: Everything is very PG-like for the tragic descriptions. It’s a wholesome read.

Have you read Rebecca Connolly’s books before? Do you plan on checking out A Brilliant Night of Stars and Ice? If you read it let us know if you agree with our review. Discuss in the comments!

REBECCA CONNOLLY is the author of more than two dozen novels. She calls herself a Midwest girl, having lived in Ohio and Indiana. She’s always been a bookworm, and her grandma would send her books almost every month so she would never run out.

Book Fairs were her carnival, and libraries are her happy place. She received a master’s degree from West Virginia University.