The Moonstone (1996): A Melodramatic Period Mystery 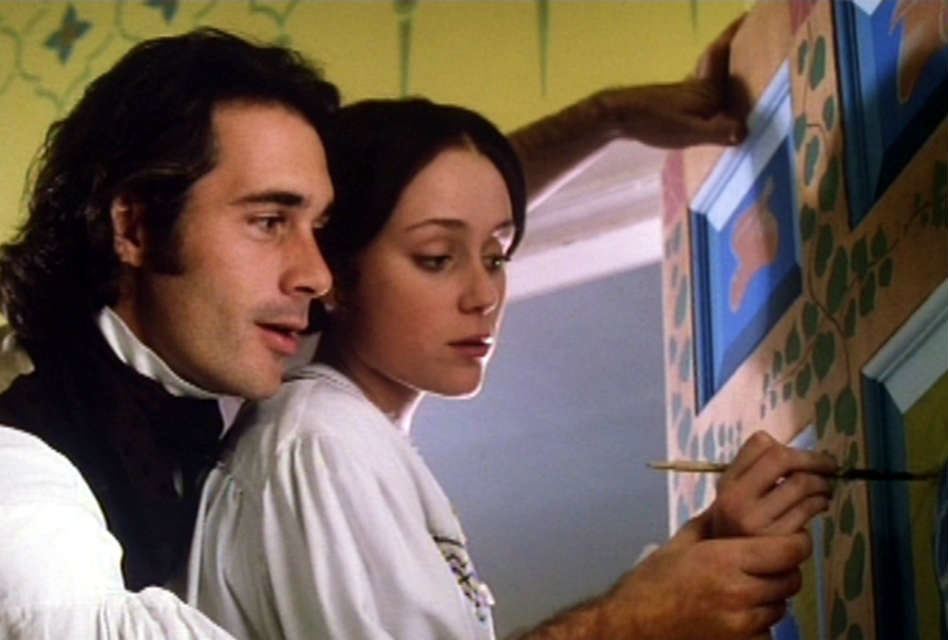 The Moonstone is a BBC adaptation of Wilkie Collins’ celebrated detective novel of the same name from 1868. Indeed, Collins’ novel is often considered the first – yes, you read that right – the first detective novel even written. So, for fans of the whodunit genre, it might just be time to check out the novel. I know I will. But – as this review can attest to – I’ve seen the movie first!

The BBC’s Moonstone is a period drama, which initially aired as a two-part miniseries. It stars none other than period drama headliners Greg Wise and Keeley Hawes. These two are a major selling point for this adaptation, might I just add. But the supporting cast is equally strong and competent. Peter Vaughan – a face seen in minor roles in many productions through the years – steals every scene he’s in as the butler Betteredge. He’s a so-called character actor who’s so much more. For fans of ITV’s short-lived paranormal mystery series Afterlife (2005-06), Lesley Sharp plays a strange maid with second sight, a prescient forerunner to her role in Afterlife as a psychic. (And might I just add that if you haven’t seen Afterlife, do. Especially if you have a thing for The X-Files. Plus, it co-stars Andrew Lincoln pre-The Walking Dead fame).

Yes, it’s a very good cast that has been assembled. The Moonstone has all the hallmarks of a quality BBC production.

Rachel Verinder (Hawes) is bequeathed a large diamond upon her estranged uncle’s death, a gift to be given on her birthday. Franklin Blake (Wise), as executor of the late uncle’s estate, arrives to do just that. He is a cousin of Rachel’s, returning to the British Isles after many years abroad. He is immediately smitten by his cousin’s beauty. She’s definitely not a little girl anymore.

The moonstone is invaluable, steeped in mystery, having been violently ripped from a holy shrine in India many years prior. Many say it’s cursed. Guardians of the stone have sworn to retrieve it, stopping at nothing.

So, it’s something of a millstone – this moonstone – around our young heroine’s neck. It’s precious, beautiful, holy and stolen by rapacious, racist and expansionist colonial powers. Rachel wears it to her birthday dinner. Mysterious Indians show up at the party. She puts the precious gem in a drawer in her room, a drawer that cannot lock, and awakes in the morning to find the moonstone gone.

The loss of the moonstone rips the house apart. Who took it? Where is it? Everyone is a suspect. Rachel retreats to her room, refusing to help with the investigation and refusing to have anything to do with Franklin. Franklin is beside himself, calling in Sergeant Cuff (Antony Sher) to investigate. He’s convinced that it was an inside job.

Oh, but I don’t want to give the plot away. Suffice it to say that there are suspects and twists aplenty. And it’s only as the anniversary of its disappearance nears that some breakthroughs in the case occur.

To be honest, it was the plot that did me in. It’s pretty sensationalist and melodramatic, especially when you find out who took the moonstone and how. The modern mystery reader in me was shaking her head and giggling. But then, the mystery/suspense/thriller genre is rather known for its farfetched plots at times. Unfortunately, our two leads – as charming as they are – don’t have too much screen time together, so their romance feels more like a plot point than anything real or organic.

RELATED: THE MOONSTONE – PERIOD ROMANCE THAT YOU SHOULD WATCH

And yet, I found myself entertained. Confused at times but entertained. Plot-wise, it feels a wee bit ridiculous, but it’s a great cast in a cinematographically beautiful film, so there’s something to just allowing yourself to sit back and roll with all the sensationalist melodrama and have a wee giggle in the process.

Content Note: There is not much to come after – no language, no skin, no gore. There is one self-inflicted death by mud pit, which is very melodramatically and poetically depicted. Yes, a character slowly sinks into a muddy sinkhole, arms raised to the heavens, so the last thing you see is an outstretched hand. I told you it was melodramatic! And I never could figure out the motivation for it.

Have you read the novel and/or seen the movie? Sound off in the comments.