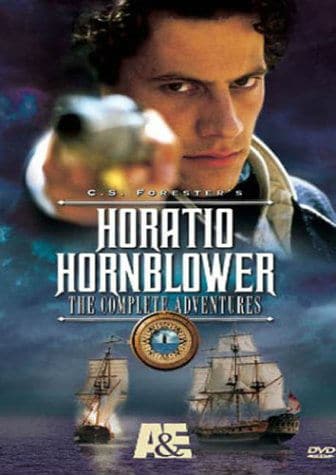 I didn’t watch Horatio Hornblower when it was on the air, but I have always enjoyed watching it none the less. Based on a series of books by C.S. Forester, Horatio Hornblower is an Emmy Award-winning miniseries produced by A&E in eight parts. It follows the story of a midshipman who joins the British Navy during the French Revolution and subsequent wars with France, and the many adventures that he has while serving his country.

The series aired from 1998 to 2003, with the individual films being labeled as TV movies before they were put together in a series collection. The first four films, The Duel, The Fire Ship, The Duchess and the Devil and The Wrong War were sold as a set in 2000. The series followed this with the collection The Adventure Continues which was released in 2001 and included the episodes Mutiny and Retribution, while the final two episodes, Loyalty and Duty, were released in the package The New Adventures in 2003.

Some of the films originally had different titles. The Duel was originally released as The Even Chance, The Fire Ship as The Examination for Lieutenant, The Wrong War as The Frogs and the Lobsters, and Loyalty was later renamed Horatio Hornblower 3. The series was well liked when it first aired; well enough to make four additional episodes after the initial series had ended.

Ioan Gruffudd stars as Horatio Hornblower, a young midshipman who rises up the ranks in the British Navy due to his ability to both think on his feet and learn from his mistakes. From the moment that Horatio appeared on screen, I had mixed feelings about him, but he quickly grew on me, like he grew on almost everyone he met through the course of the series. 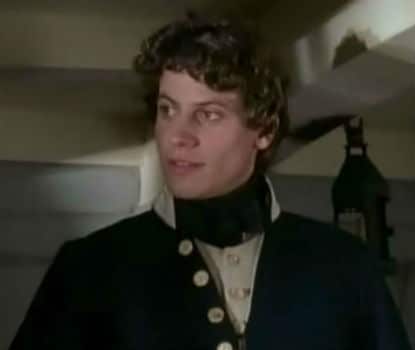 Ioan Gruffudd as Horatio in “The Duel.” Photo: A&E

Horatio is an honorable character who does his best to behave in the way that he sees as befitting an officer and a gentleman. Whether engaging in a duel, returning to prison because he gave his word to his captor that he would, participating in a mutiny against a captain who seems to be mad, or stepping out on a limb to protect those under his command, Horatio is the kind of character that you enjoy watching. He makes mistakes, but he is always learning and growing as a character while still maintaining the things that made him likable in the first place.

There is some romance in the series, but it doesn’t seem like a major part of the overall story. One story that deals with some romance is The Wrong War. In this film, Horatio and his crew are deployed to France to assist in a Royalist Invasion. While there, Horatio falls in love with a young Frenchwoman, Mariette and vows to protect her from the soldiers in her village.  I don’t want to give spoilers, but it doesn’t end well for them. I cried, but then, I cried at the end of 101 Dalmatians, so take that with a grain of salt. 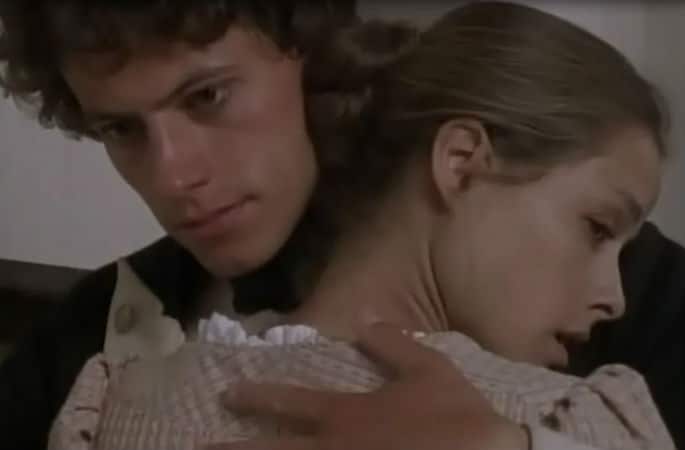 Horatio and Mariette in “The Wrong War.” Photo: A&E

Horatio does eventually get married to a woman named Maria, who he meets during the uneasy peace in Loyalty and marries at the beginning of Duty. Although Horatio and Maria have what seems to be a mutual attraction for each other, their romance faces some hurdles. On one hand, he proposes in such a way as to make me wonder if he loves her as much as she loves him. On the other hand, he wears the mittens she made him.

Honestly, I have watched their interactions over and over again, and I can’t quite decide. He knew that marrying her was the only way he could protect her, but he also does seem fond of her. Maybe his feeling of duty to his ship, his men and his country is overruling his sense of duty to his wife? Or am I just too distracted by all the sailing to see the romance? What did you think? Sound off in the comments! Overall, I gave the romantic aspect three out of five, because the main focus for so much of the series is on Horatio’s military career and his adventures in the Navy. 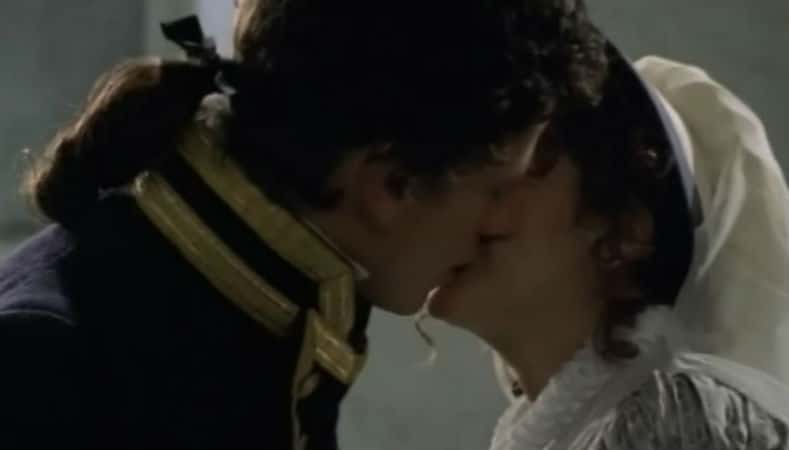 The topics of the films include starvation and plague (The Fire Ships), capture and honor while in prison (The Duchess and the Devil), mutiny and the question of whether or not it is sometimes acceptable (Mutiny), the consequences of mutiny, both in terms of court martial and after the mutiny while still sailing, and loyalty (Retribution), conflict among officers, honor, and dueling (The Duel), the truly tangled situation in France (The Wrong War), loyalty to country, friends and shipmates (Loyalty), and duty to country, family and friends (Duty).

Something that I enjoyed was seeing the British soldiers and the French Royalists working together in The Wrong War; the way that the two groups interacted was quite fun. One of the sailors pointed out that just a day before, all the French had been enemies of the English, and suddenly, they’re fighting with some of the French against other Frenchmen. Even the differences in marching styles were striking; the English were much better organized. This makes sense given that the French military was a military in exile, rather than an active military.

In 1999, the series won the Emmy for Outstanding Single-Camera Picture Editing for a Miniseries or a Movie, and also won the award for Outstanding Miniseries for The Duchess and the Devil, The Examination for Lieutenant, and The Frogs and the Lobsters. Mutiny was nominated for 13 Emmys, Loyalty for 8, and Duty for 4. Overall, it made quite a good showing and it’s easy to see why. Full of action, adventure, a compelling hero, likable supporting characters, and tons of sailing, it’s the kind of series that you want to watch again and again. 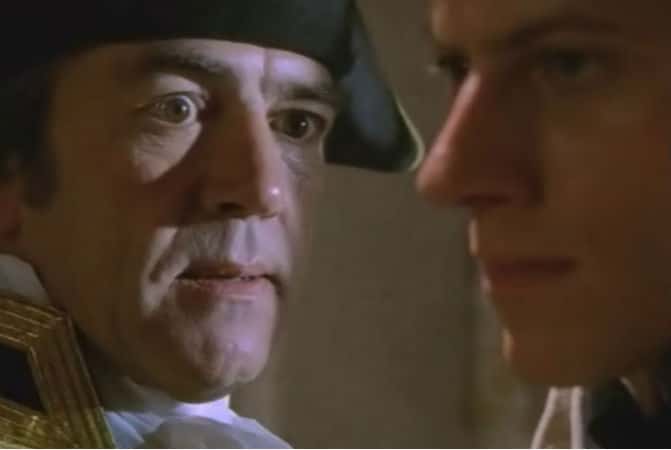 For me, this series is special not only because it is an action/adventure period drama about sailing, which automatically makes it wonderful, but because I have some experience sailing. I spent a wonderful seven months working on a tall ship a few years back as their education officer. This really enhanced my experience watching the series, because I had a working knowledge of what they were doing and talking about onscreen. For me, that experience helped the series come alive in a way it might not have if I’d watched it earlier in my life.

As Horatio grows, both professionally and personally, we get to travel with him and learn too. Beautifully shot, Horatio Hornblower also has an amazing score that conveys the gravity of each situation. As a war series, there are real stakes and people die, but this makes the story feel real. Characters that we care about don’t necessarily make it to the next film, which is also true in war. 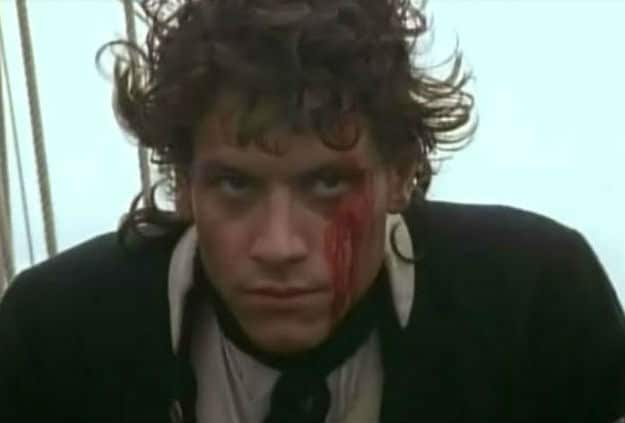 Personally, I enjoyed The Duel the most; it’s a great introduction to a fascinating set of characters. I felt like Horatio had the most striking change in this episode; he went from a kid who didn’t know the difference between a head and a halyard to being selected by the dying Lieutenant Eccleston to command the ship. However, all eight films are fantastic (though Loyalty or Mutiny might be my second favorite episode).

The only downside to Horatio Hornblower it that is made up of eight films that are each an hour and a half long. You can interpret that as too long or too short; I suppose it really depends on your mood. Either way, Horatio Hornblower is well worth the watch.

Fun connections: Ioan Gruffudd (Horatio) played Lancelot in the 2004 King Arthur, as well as having a role in Titanic. Greg Wise, who played Major Cotard in Loyalty also played Sir Charles Maulver in Cranford and John Willoughby in the 1995 Sense and Sensibility.

Content Note: The series includes some violence and should be TV-14.

Do you have a favorite film of the eight? What did you think of the romance between Horatio and Maria?