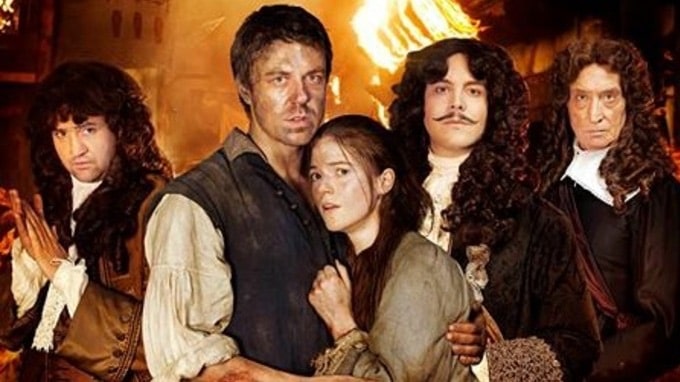 THE MINISERIES: The Great Fire

THE SETUP: This period drama mini-series follows the Great Fire of London in 1666.

It’s great to see the 17th and 18th centuries making a comeback in popular culture. From Belle to The Musketeers, it seems we can no longer avoid the allure of a be-ribboned dress and a big, curly wig. This four-part miniseries from ITV is based on a historical event known to every British schoolchild who can play “London’s Burning” on the descant recorder – the Great Fire of London in 1666.

From Belle to The Musketeers, it seems we can no longer avoid the allure of a be-ribboned dress and a big, curly wig.

It was written by ITV News political editor Tom Bradby, who has written a very interesting article on the parallels he sees between the political situations in 1666 and 2014 (austerity, terrorism, xenophobia etc. – Read More Here). Many at the time believed the Great Fire was part of a Catholic plot, rather than the unfortunate accident it actually was. The speech Charles II makes at the end of episode four is, I think, directed towards the modern viewer, and I found it quite moving.

Some of the story in The Great Fire is taken exactly from history, some is made up, and some borrows from the so-called Popish Plot of 1678 to 1681. The human drama centres round three families: the Farriners of Pudding Lane (the baker’s shop where the fire started), Samuel Pepys and his wife Elizabeth, and the Royal Family of Charles II, his brother the future James II, and his queen Catherine of Braganza. These families from three different social classes are ultimately drawn together in a moving finale. A villain is provided by the king’s spymaster (played by the ever-sinister Charles Dance), who is determined to find a scapegoat for the fire at all costs,

There are a lot of familiar faces in this drama. Andrew Buchan from Garrow’s Law, Sonya Cassidy from The Paradise and Oliver Jackson-Cohen from Dracula, to name but a few. For anyone who is into 17th century fashion, it is a feast for the senses, from the mock wedding as court entertainment to the beautiful silhouette when Charles II rides out in episode four (the camera artist must have been patting themself on the back for that one!) The story isn’t particularly fast-moving, nor is the series life-changingly brilliant, but it’s a nice mid-week watch that gives you something to think about.

The Great Fire is now available to buy on DVD HERE, and given its popular subject matter, I wouldn’t be surprised if it was shown in countries outside the UK soon.

“I think this is the beginning of a beautiful friendship”