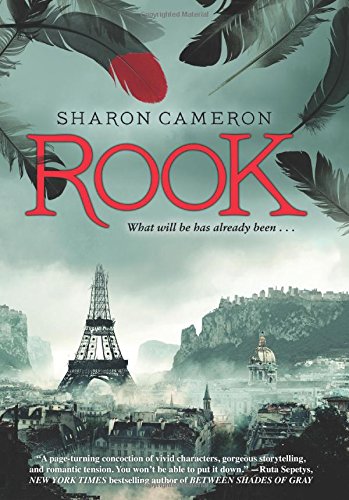 “I think you are very beautiful,” René said, “especially when you are admiring mischief.”

“You must think that every time I look at you, then.”

There are many reasons that make a book so amazing that you savor each page, shake with laughter and fight your sister to reread it first. Some of those elements are:

-A rollicking adventure with an original, unique setting

-A cold-blooded villain obsessed with furthering his cause

-A family of rugged smuggler uncles

-Witty dialogue times 100, a hate-then-love romance, and a brilliant author…

“History has a way of repeating itself. In the Sunken City that was once Paris, all who oppose the new revolution are being put to the blade. Except for those who disappear from their prison cells, a red-tipped rook feather left in their place. Is the mysterious Red Rook a savior of the innocent or a criminal?

Meanwhile, across the sea in the Commonwealth, Sophia Bellamy’s arranged marriage to the wealthy René Hasard is the last chance to save her family from ruin. But when the search for the Red Rook comes straight to her doorstep, Sophia discovers that her fiancé is not all he seems. Which is only fair, because neither is she.

As the Red Rook grows bolder and the stakes grow higher, Sophia and René find themselves locked in a tantalizing game of cat and mouse.”

SOPHIA: My name is Sophia and “underestimated” is my middle name! Haha, stupid men!

SOPHIA: ‘Underestimated’ or ‘Stupid Men’? ‘Cuz I feel like the latter would be a good middle name for you. Since I think you are stupid.

RENE: Thinking I’m stupid makes you stupid, especially when I am just as many other adjectives that begin with ‘S’. Suave, sexy, swoon, smart? *Cocks eyebrow*

SOPHIA: You may be very hot. And I think about your red hair a lot. But I’m only marrying you so I can save my father from debt. In my spare time, I like to brandish swords and rescue prisoners from the gallows. I am also spying on you every night.

RENE: You had me at spy!

Rook is one of the most stand-out novels I have ever read and I admire its author endlessly for her seamless story and funny, lovable characters. Sophia Bellamy is sixteen, living in a France so futuristic that the future resembles the past – specifically, 1600s France. The people sport wigs and too much makeup and finery, the government is corrupt and prisoners are put under the Razor (aka the guillotine)! In France, the Red Rook runs rampant (I shan’t say who it is, though you know soon enough) – an unknown savior of many prisoners, freeing them under the nose of Officer LeBlanc, and leaving only a red feather behind. The book was inspired by The Scarlet Pimpernel, but since I hadn’t seen or read it (something you bet I am planning to do now), I originally considered Rook to be a mix of Robin Hood and Mr. & Mrs. Smith. If you’re thinking that’s an amazing mix – YOU ARE RIGHT! Plus, the dialogue in this book was it’s high point, and if you’re a fan of laugh-out-loud dialogue in ADDITION to great characters & plot…you need to read this!

The book begins with Sophia’s engagement to Rene Hasard, an arranged affair that neither party is excited about. But luckily for readers, nothing is so entertaining as a witty adventure love story between characters who are convinced they are better than the other. Rene and Sophia fill the first half of the book with shots at the other via comments in the form of snide remarks, soft chuckles, and layered meanings. At first they are full of dislike and distrust for each other, and along with their trusty assistants, they spy on each other. (The spying from both sides is endlessly adorable. Endlessly.) In addition to verbal sword fighting, there is also actual also sword fighting. (Sophia much prefers it to marriage.) But, as the chillingly evil LeBlanc (who is related to Rene) moves in closer on finding out who the Red Rook is, they realize they need to work together for the same goals, including rescuing Rene’s mother, saving Sophia’s brother, and keeping Sophia and her house from the clutches of corruption!

The plot is so deftly done that it allowed for a lot of fun in the novel. Sharon Cameron is an excellent writer because you have to initially work to understand her fast-paced cleverness and sharp writing (it’s that little bit of a challenge that makes a book truly good!). Additionally, you have to admire her ingenuity. The novel is technically dystopian since they live in a futuristic France that is ruled by oppressive and shadowy religious figures, but it read more like a funky historical adventure-romance to me. Oh, and the secondary characters! Sophia’s childhood maid and Rene’s shadowy butler were consistently funny characters who were supportive in advisory roles. They also shook their heads a lot as their young proteges were blind to their obvious growing attraction.

Rene is wicked in the best way because he first pretends to be a preening snob when he first meets Sophia. She – the queen of being underestimated – underestimates him which, of course, impresses her, as it’s nice to meet someone on her level of trickery.  I love the process a character undergoes when they realize someone they judged is not what they seem at all. It’s a humbling experience that is always gratifying to read about, and both Rene and Sophia go through this. The following quote is said by Rene as he grows to admire the constant brilliance of his fiancee and struck me as crazy romantic.

“You are the variable in every equation, Mademoiselle.”

I utterly loved all of the parts featuring Sophia (and Rene) climbing through windows, sneaking across roofs and disguising themselves constantly. The novel truly takes off after they’ve spied on each other to their heart’s content and irritatedly come together to work on an elaborate plan to get past LeBlanc. Their relationship was riddled with mistrust, what with her drugging him and him tailing her, but it was lovely to see them realize they could be lovers instead of enemies!!! I loved Rene’s personality as well, since he’s a bit wicked and mischievous and prone to calling Sophia ‘darling’ when all she wants to do is kick him.

“Your maman was in my room last night.”

They also have to pretend to be in love, which we all know, according to movies, is the secret to true love…Their journey of hatred to mistrust to grudging acceptance to reluctant admiration to FULL BLOWN LOVE was a ride full of thrills. I barely kept my hat on and by the end I had thrown it off in glee.

It was nice that this was a standalone novel. I wished it would never end (I actually tried very hard to savor every page, but alas finished it in a day). It never dragged or got too plot-heavy and confusing – it was the perfect mix of character development, crazy action, rescuing prisoners, evil villains, and hilarious family drama. Also the perfect amount of romance. Siiiiigh. I think I’m going to reread it.

Sharon Cameron has written another duology, The Dark Unwinding, a fabulous gothic steampunk 1800s romance that’s worth checking out if you wholeheartedly agree with this review of Rook! Do you? Comment below, we’d love to know!

Our romance-themed entertainment site is on a mission to help you find the best period dramas, romance movies, TV shows, and books. Other topics include Jane Austen, Classic Hollywood, TV Couples, Fairy Tales, Romantic Living, Romanticism, and more. We’re damsels not in distress fighting for the all-new optimistic Romantic Revolution. Join us and subscribe. For more information, see our About, Old-Fashioned Romance 101, Modern Romanticism 101, and Romantic Living 101.
Pin this article to read later! And make sure to follow us on Pinterest.
By Amirah Yasin on October 6th, 2015

3 thoughts on “YA Review: Rook is A Rip-Roaring Romance!”