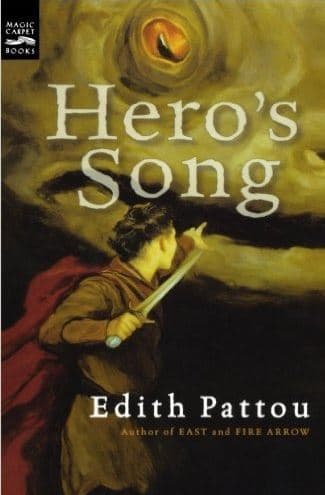 In Edith Pattou’s Hero’s Song, Collun leads a simple life. He lives with his parents and younger sister Nessa in the small town of Inkberrow. Collun’s days are filled with gardening and spending time with his friend Talisen, an aspiring bard, whose charming personality is the opposite of Collun’s quiet one. Nessa longs for more adventure and goes to live with their aunt Fial in the larger city of Temair. Though Fial sends word that Nessa is enjoying her time in the city, disaster strikes, and Nessa disappears.

Word is sent to Collun and his family, and they wait in vain to hear of Nessa’s return. Collun’s mother, Emer becomes ill, taking to her bed when hearing of her daughter’s disappearance, and there is nothing Collun or his father Goban, can do to ease her spirits. Goban, a blacksmith, has little in common with Collun, and due to an old injury, cannot go search for Nessa himself. Collun delays in going after Nessa, hoping that she will be found, and Goban is angry at his meek son.

Soon after, a wild man from the forest, a kesil, appears and gives Collun an enigmatic warning.

With the kesil’s words rattling around his mind, Collun decides to go to Temair to find his sister.

Goban reshapes Collun’s garden trine into a dagger for him, a symbol of his approval that Collun is taking the journey. Emer begs Collun not to go, not wanting to lose her son along with her daughter, but eventually relents. Before he leaves, Emer tells him to search for Crann, if he runs into trouble, but offers no explanation as to who Crann is. She also tells Collun not to speak of her in the city. Troubled by this, Collun leaves his home behind.

The road to Temair is beset with danger, due to an uneasy truce between the rulers of the land of Eirren, and Medb, the queen of Scath, the land directly to the north. Collun understands this, and when he runs into Talisen, he accepts his friend’s presence on the road with him. When an interaction with a scald-crow, one of the creatures from the north, leaves Collun with a numb forehead, Collun is unhappy at the foreboding omen. He and Talien continue their journey and eventually reach an inn.

Unfortunately, there is danger at the inn as well, and Collun and Talisen discover several Scathians wanting to kill them. Confused by this, the boys try to flee, and are saved by a mysterious archer, who wounds one of the Scathians. The archer is named Breo-Saight, or Brie, and he decides to travel with Collun and Talisen. It turns out, however, that Brie is in actuality, a girl, and is angry when Talisen sees through her disguise. She explains that she travels as a boy for safety and makes her travels easier. The group continues their journey with little trouble for a few days until they are beset by a menacing ivy vine in the forest that almost kills them. They are rescued by a magical Ellyl named Silien. He too, joins the group on the journey, to head back to his kingdom.

Before long, the group is attacked again, by a magicked boar that Collun eventually takes down with his dagger. He is wounded, and the group ends up lost in a forest, far from the road. As they wander further and further, they happen upon the kesil that warns Collun before his journey. The kesil reveals himself as Crann, the man that Emer told Collun to turn to for help. Crann is wizard, in disguise, much like Bree. He helps to heal Collun, but mysteriously leaves the group before they reach Temair.

It is in Temair where Collun’s nightmare truly begins, for Nessa’s disappearance is infinitely more complicated than he realized.

With strangers all around him, Collun has no one to trust but Talisen and Brie. The political implications of Nessa’s disappearance are more than Collun expected, and with creatures from legend and darkness looming from Medb in the north, Collun will have to find an inner strength he didn’t know he had in order to save his sister.

There are brief romantic notes between Collun and Brie, but there is a romantic and folktale-like quality to the novel. This is certainly an adventure story, and a definite page-turner, especially in the second half of the book! Hero’s Song was one of my favorites as teen, and is just as appealing as an adult!

With Celtic influences, Hero’s Song would look great on the silver screen. Its fantasy landscape has a similar aesthetic to Peter Jackson’s Lord of the Rings series, and with much of the story taking place on the road, audiences could get a wonderful, literal and figurative hero’s journey.

For casting, I’d put Isaac Hempstead-Wright (Game of Thrones) as Collun, who can definitely play a reluctant and quiet hero, but still be able to command the screen. Alicia Vikander (Ex Machina, The Danish Girl, The Man from U.N.C.L.E.) would portray a fiery Brie as she’s shown broad versatility in her many roles from the past year. Alberto Rosende (Shadowhunters: The Mortal Instruments) could bring Talisen’s cheeky quality to the character and round out the trio well!

What do you think of Hero’s Song? Who would you cast? Sound off below…

Our romance-themed entertainment site is on a mission to help you find the best period dramas, romance movies, TV shows, and books. Other topics include Jane Austen, Classic Hollywood, TV Couples, Fairy Tales, Romantic Living, Romanticism, and more. We’re damsels not in distress fighting for the all-new optimistic Romantic Revolution. Join us and subscribe. For more information, see our About, Old-Fashioned Romance 101, Modern Romanticism 101, and Romantic Living 101.
Pin this article to read later! And make sure to follow us on Pinterest.
By Clarissa Hadge on February 23rd, 2016