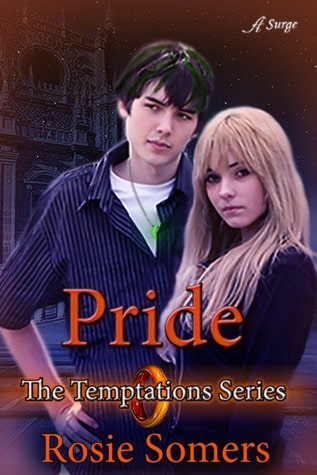 YA Author of Pride from The Temptation Series is here to take our Petticoat Personality Test and tell you a little bit about her new book! So take a few minutes to get to know Rosie and her fun answers and find out which popular TV couple from the past she absolutely adores!

Was there any movie you found yourself going to the theater to see on numerous occasions?

I try to make it a rule to only see a movie in theaters once, but there have been a few I would have gone back to see again. Those are the movies I can’t wait to buy as soon as they are for sale. Divergent is a good example (Theo James, ‘nough said). I bought it the day it came out and probably watched it ten times in the month following.

What Movie/TV Show or book character turns you on?

I have a huge crush on Four/Theo James. It’s sort of a running joke in my house.

Austin Powers. I just never got him.

I love musically rich, complex stuff: OneRepublic, Florence + the Machine; or witty wordplay/ lyrics that make me stop and think: Blue October, Sia. My musical taste is pretty eclectic, though. I’ve been known to have Beethoven, Emily Osment, and Blue October all on the same playlist.

I adore Max and Liz from Roswell. Whenever I’m feeling nostalgic, I watch old episodes and live vicariously through their tortured, angsty love.

Chipotle. I have a serious Chipotle addiction. Growing up, my mother made a lot of ethnic food, with an emphasis on Mexican. So, Chipotle is totally comfort food for me.

Aside from mine? Haha, J/K. Kinda. No, seriously though, I would say maybe Lauren Oliver’s Delirium. I read it a couple years back, and it’s just stuck with me. Very few books do that.

Regency England, but only if I could be a duchess. An emancipated, altruistic, philanthropic duchess. Oh, and I’d be wooed by the most handsome rogue of a duke in the land, who would of course reform his rakish ways for me. I would also need beautiful gowns and lots of french chocolate.

I frequently binge watch shows from my teen years on netflix. Most recent binges were Buffy and Roswell.

Probably the Big Bang Theory. I probably identify most with Howard–minus the whole Jewish thing. I’m kind of nerdy, totally geeky, and I say/do inappropriate things at the worst times. My husband is totally my Bernadette, too. He keeps me grounded and out of trouble.

“Rosie Somers is a YA author who lives in Florida, soaking up the year round sunshine. She can often be found in her favourite spot on her favourite beach, nose-deep in a good book.”

“Seventeen-year-old Gabriella Pierce is used to taking care of herself, but she’s about to become responsible for a whole lot more. When she gets a visit from three men claiming to be defenders of fantastical rings imbued with the powers of THE CARDINAL SINS, her life is changed irrevocably.

Gabby is the steward of PRIDE

To make matters worse, she’s falling hard for fellow steward, Grant Barnett, and he hates her guts. Now Gabby has to learn to protect Pride without letting her feelings for Grant get in the way.”