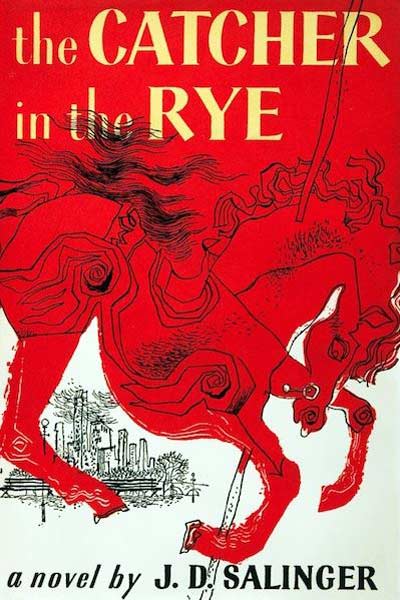 Vintage YA Book: The Catcher in the Rye

The Catcher in the Rye Review

Before YA was an actual category in literature, there were still novels that set a precedent for what young adult literature would soon become- touchstone novels that would create a voice and influence future generations of teen literature as we know it today. The Catcher in the Rye by J.D. Salinger was one of these novels.

The Catcher in the Rye follows 16 year old Holden Caulfield, a character so stifled by his prep school environment that after he gets expelled, he takes off for New York City, searching for truth and commenting on the hypocrisy (or phoniness) of adulthood along the way.

On the surface, the story itself doesn’t sound particularly interesting. So what is it about The Catcher in the Rye that stays with us? What is it about Holden Caulfield that just works? I believe it is Holden’s universal teenage alienation and cynicism as a character that still rings true.  It is about identity.

Holden’s search for independence within his hypocritical environment creates an unsettling fear of nonexistence and lack of identity. Holden Caulfield particularly dreads he will lose his independent thinking, his quest for individuality in the midst of conformity and phony adulthood while also desiring attention and companionship at the same time.

Despite his quest to find his personal identity in The Catcher in the Rye, however, Holden is never ultimately able to reconcile the two opposing forces of independence versus the want of attention to fully ever negotiate and find his individual identity in the midst of a conforming society. This intensely deep characterization makes Holden one of the most memorable characters in the history of YA. It also makes him relevant to teen readers today as well.

Aside from characterization, the prep school works as a brilliant symbol, the school representing the fears Holden has of adulthood. Holden’s want of independence also connects to his inner desire to hold on to the past as he rejects the idea of adulthood. Holden unconsciously isolates himself in order to be protected from the smothering of identity he finds in adults and the Pencey students who represent them.

It is this unconscious recognition that his individuality is at stake, that his identity will become those of whom he despises, that every road he crosses, every step closer to adulthood he takes, the more he will disappear until his individuality is obliterated into nothing. This intense focus on identity and Holden’s voice (character over plot) is what makes Salinger’s novel so memorable. Holden just feels real.

Even though some readers will still be turned off by all the angst and Holden identity seeking, one can’t deny the power of Salinger’s classic novel because the writing and characterization is so powerful. While this will never be one of my favorite novels of all time (I’m more of a L.M. Montgomery or supernatural type of girl), I appreciate what Salinger accomplished. I appreciate that he was one of the pioneers that opened the door for more literature of an age group once ignored. He helped give it a voice.

What do you think of The Catcher in the Rye? Sound off in the comments…

Our romance-themed entertainment site is on a mission to help you find the best period dramas, romance movies, TV shows, and books. Other topics include Jane Austen, Classic Hollywood, TV Couples, Fairy Tales, Romantic Living, Romanticism, and more. We’re damsels not in distress fighting for the all-new optimistic Romantic Revolution. Join us and subscribe. For more information, see our About, Old-Fashioned Romance 101, Modern Romanticism 101, and Romantic Living 101.
Pin this article to read later! And make sure to follow us on Pinterest.
By Autumn Topping on April 12th, 2015