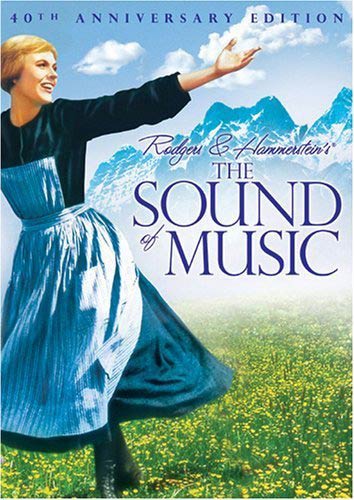 The Sound of Music

In honor of one of the best movie musicals ever made, “The Sound of Music” is celebrating its 50th anniversary this year and was available to view on the big screen for a limited time. Having the opportunity to view it on the big screen was like seeing the film for the first time and was just a wonderful moviegoer experience.

The film is based on the stage musical from Rodgers and Hammerstein and has been adapted many times since, but none could compete with the show stopping 1965 version starring Julie Andrews and Christopher Plummer. The story itself is based on the real life von Trapp family who were performers in Austria before settling in America after the Second World War. While the play and film take some facts about the family’s life, the rest is fictional and better suited for the story.

The film opens famously with the young, carefree nun Maria twirling and singing atop the mountains of Austria before realizing that she is late for chapel. This is a regular occurrence for Maria as noted by the nuns, who do not know how to solve a problem like Maria. The Mother Abbess is torn between keeping Maria as a novice and sending Maria out into the world. Maria longs to be a nun but lacks self-discipline and has even more difficulty keeping her thoughts and feelings to herself.

The Mother Abbess reaches a conclusion that Maria needs to experience life outside the Abbey before she makes any decisions about her future. She sends Maria to be a governess to the widowed Captain von Trapp and his seven children. Maria departs the Abbey, determined to find enough confidence in herself to be a good governess and not be sent back as a failure.

Maria arrives at the family villa, overwhelmed by the beautiful house and immediately annoys the Captain with her honesty. The Captain has been raising his children using strict military discipline, showing them little affection, making them wear uniforms and using a whistle to summon them to meet their new governess. Maria is unnerved by all this and tries to show the children kindness, but the children are used to playing tricks on their nannies to get their father’s attention, and Maria is no exception to their pranks.

Things begin to improve when the children become upset over a thunderstorm and seek comfort from Maria, who tries to cheer them up by telling them of her favorite things and encouraging fun and games. When the Captain leaves for Vienna to visit Baroness Schraeder, a wealthy friend, implied by the family housekeeper to be more, Maria takes advantage and decides to really show the children how to have fun. In an iconic scene, she makes the children new play clothes from the old draperies from her bedroom and takes them on picnics, tours of Salzburg, bicycle and carriage rides all the while teaching them how to sing so they can impress the Baroness and more importantly their father.

When the Captain returns, he is furious for Maria interfering in his parenting and after a heated argument (where she warns him that he soon won’t recognize his children if he continues ignoring them), he orders her to leave and return to the Abbey. His order is quickly reversed when he hears his children singing to the Baroness and his visiting friend and uncle figure Max Detweiler, who seems impressed by their musical skills. He joins in and shocks his children, who embrace him, their family bond repaired. The Captain humbly apologizes to Maria and thanks her for all she has done.

Aside from Maria, an interesting subplot involves elder daughter Liesl, who at sixteen (“going on seventeen”) is experiencing first love with Rolfe, a telegram delivery boy about a year older then Liesl. They must hide their relationship as they know her father would not approve. Liesl confides in Maria about their relationship. As the summer continues and she sees less of Rolfe (who was evicted from the villa earlier by the Captain), she begins questioning their relationship and what is real love.

Later on in the film,the children’s musical talents have become so great that Max considers entering them in the Salzburg Festival, though their father refuses to have his family perform in public. Meanwhile, Maria and the Captain become closer and the Baroness witnesses several affectionate looks between the two.

The Captain decides to host a ball in order to introduce the Baroness to his friends and as a gift to the children. Maria offers to show one of the boys how to dance the landler, the Captain offers to take his place and the two commence a romantic dance witnessed by the children and a jealous Baroness. Maria becomes confused about her feelings, while the Captain acts nonchalantly after the dance, while praising his children and Maria to his guests. The romance is as memorable as ever on the big screen!

The Baroness soon preys on Maria’s confusion and lack of experience and convinces her to return to the Abbey where she can ignore her feelings. She departs and leaves the children in distress and misery, which only worsens after their father announces his engagement to the Baroness.

In the meantime, the Mother Abbess becomes concerned for Maria and insists on speaking to her about her experiences at the villa. Maria soon breaks down and confesses her feelings for the Captain and the wise nun informs Maria that she must face her problems and climb every mountain to discover if her destiny is to be a nun or to be with the man she loves. Maria returns to the delight of the children and the Captain, who soon ends his engagement when he realizes that he loves Maria and his children are happier with her than the Baroness. They confess their love to each other, having discovered something good between them and marry with the children and the nuns from the Abbey present.

While their parents are honeymooning, Max goes behind his friend’s back and enters the children in the festival, hoping their performance will win and make him wealthy. Unfortunately, the Anschluss has begun in Austria and with war looming over the family’s peaceful life, it seems the family might never perform together again and must make a decision whether to stay in Austria or follow a different path.

“The Sound of Music” has been one of the biggest successes in the musical film industry and won many major awards. It is still considered fifty years later a cinema masterpiece and many film goers still know those memorable songs and enjoy the lush, beautiful scenery of Austria, from the wondrous hills to the stunning streets in Salzburg. It is a movie that can still be enjoyed by anyone who loves music, hope and believes in following the rainbow until they find their dream.

Our romance-themed entertainment site is on a mission to help you find the best period dramas, romance movies, TV shows, and books. Other topics include Jane Austen, Classic Hollywood, TV Couples, Fairy Tales, Romantic Living, Romanticism, and more. We’re damsels not in distress fighting for the all-new optimistic Romantic Revolution. Join us and subscribe. For more information, see our About, Old-Fashioned Romance 101, Modern Romanticism 101, and Romantic Living 101.
Pin this article to read later! And make sure to follow us on Pinterest.
By Julia McCracken on April 6th, 2015