It Happened One Night is an enjoyable and endearing romantic comedy (one of the first). It tells the story of two strangers, from different classes of society, meeting one night and growing closer as they embark on a journey together.

Clark Gable is inimitable as the dashing debonair reporter, Peter Warne, who falls in love with the headstrong heiress, Ellie Andrews, played by Claudette Colbert.

Ellie is extremely rich, has a doting father, and has always been looked after rather too well, so much so that she feels deprived of freedom. One day, in order to escape, she jumps off her father’s ship and swims away to go meet the man she recently married. However, we soon come to realize, she barely knows that man. Plus, her father is convinced he is nothing but a gold digger.

On the way to meet her husband, Ellie has to dodge her father’s persistent attempt at trying to find his runaway girl. During her escape journey, she meets Peter who is a reporter in search of a good story. When he realizes who Ellie is, he spots an opportunity of a lifetime. He offers to help Ellie reach her husband as long as she allows him to write a day to day account of her travails in this quest to reach her lover against her father’s wishes. 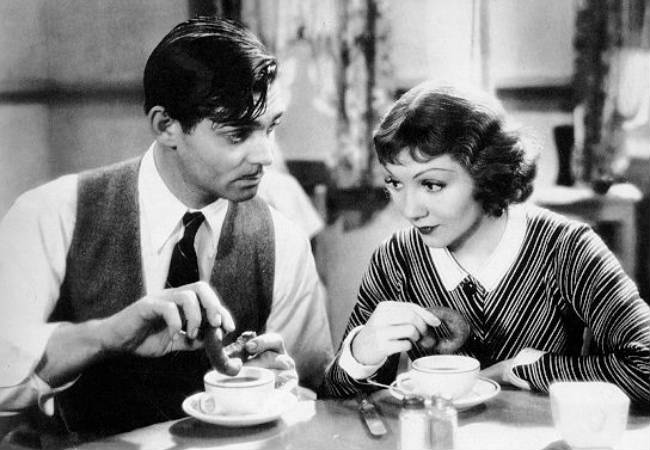 What both hadn’t bargained for was the complication of how much they would start to like each other as they spend more time together. Not just one night, but the pair stay together over multiple nights and this journey only gets more humorous and endearing with every passing night.

In some of the most iconic scenes of the classic romance, the wit of the maker and the panache of the actors stands out rather clearly. To dodge the detectives her father sends, Ellie and Peter even pretend to be a bickering married couple at one point. They also end up sharing the room for a night, but Peter with true chivalry puts up a bedsheet as a curtain between him and the innocent Ellie who has never been alone with a man before. From buying her a toothbrush to lending her his pajamas, Peter takes care of her while continuing to tease her.

Another fun and memorable scene is when he tries to impress Ellie with his knowledge of hitchhiking. His thumb doesn’t do the trick, but Ellie’s shapely legs are enough to stop 40 cars or maybe even more. However, when not riding buses or cars, Ellie prefers piggyback rides that Peter gives her as they cross a stream. 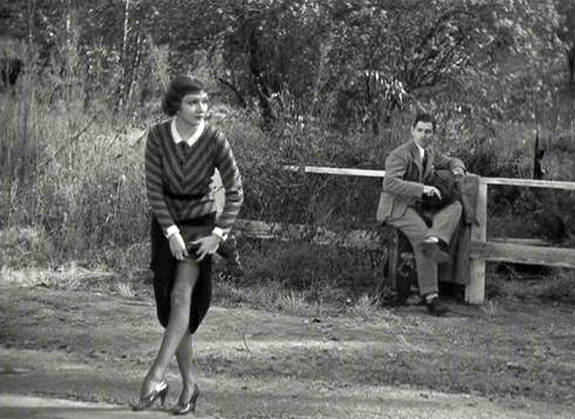 Really, what sells the film is the building tension between Ellie and Peter. Ellie has never met a man who doesn’t do as she tells him to. At the same time, Peter isn’t impressed by her money or even very polite to her. A match made in heaven.

This is a fun filled ride all along, but in the end when Peter and Ellie’s father meet, things get even more complicated, hilarious and awfully sweet.

Clark Gable is always good at such roguish, yet genuine hearted roles. On the other hand, for me, Claudette was a pleasant surprise since I haven’t seen her movies before. The character she plays is enticing and definitely has a mind of her own. There is never a dull moment in this story. Even without a single kiss, It Happened One Night is a lovely romantic movie worth seeing. No wonder it is a classic! It Happened One Night definitely deserves all the 5 Oscars it won.

Our romance-themed entertainment site is on a mission to help you find the best period dramas, romance movies, TV shows, and books. Other topics include Jane Austen, Classic Hollywood, TV Couples, Fairy Tales, Romantic Living, Romanticism, and more. We’re damsels not in distress fighting for the all-new optimistic Romantic Revolution. Join us and subscribe. For more information, see our About, Old-Fashioned Romance 101, Modern Romanticism 101, and Romantic Living 101.
Pin this article to read later! And make sure to follow us on Pinterest.
By Rhea Sinha on July 12th, 2015