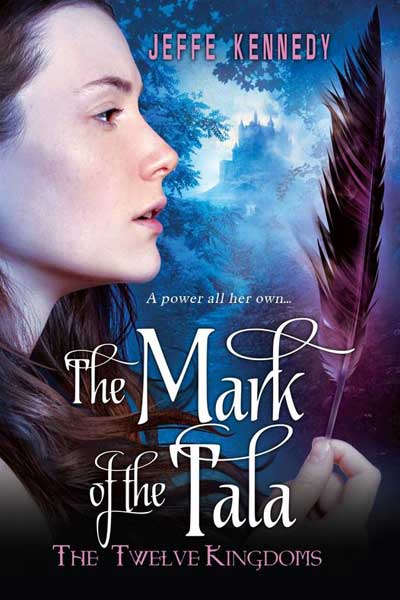 “The tales tell of three sisters, daughters of the high king. The eldest, a valiant warrior-woman, heir to the kingdom. The youngest, the sweet beauty with her Prince Charming. No one says much about the middle princess, Andromeda. Andi, the other one.

Andi doesn’t mind being invisible. She enjoys the company of her horse more than court, and she has a way of blending into the shadows. Until the day she meets a strange man riding, who keeps company with wolves and ravens, who rules a land of shapeshifters and demons. A country she’d thought was no more than legend–until he claims her as its queen.

In a moment everything changes: Her father, the wise king, becomes a warlord, suspicious and strategic. Whispers call her dead mother a traitor and a witch. Andi doesn’t know if her own instincts can be trusted, as visions appear to her and her body begins to rebel.

For Andi, the time to learn her true nature has come. . .”

The Mark of the Tala Review

An adult novel in the style of a YA fantasy, The Mark of the Tala is an enjoyable and gripping read. Wanting to know what happens next to Andi and her sisters, I went from one chapter to the next and finished reading in one night. Jeffe Kennedy certainly knows how to suck you into this romantic tale about identity and love.

The first book in the Twelve Kingdoms Series follows the middle sister, Andi, the one who feels invisible next to her older warrior sister and younger more beautiful sister. No one really pays attention to Andi, and she doesn’t seem to mind as she is free to go where she likes, to ride her horse where she likes. That all changes, however, when one day she wanders too far…to the edge of the safe borders and meets a handsome, mysterious man named Rayfe who knows more about her heritage than she does. She feels drawn to Rayfe, the King of the Tala, yet doesn’t know if she can trust him, not when all those in her kingdom call him and all the Tala evil demons. There is one big problem in all this…turns out her mother was a Tala…a shapeshifter and witch. What does that make Andi and who can she trust?

With a lot of interesting high fantasy and magic thrown in, The Mark of the Tala makes for an exciting read. The characterization of Andi is rich and believable. The contradictions within her and flawed choices she makes urge you to root for her happy ending. The dilemmas she faces in the two sides of her blood further make Andi’s journey an interesting one to follow.

Aside from well developed world building and good characterization of the heroine, the romance is also quite riveting. The chemistry between Rayfe and Andi is believable and great fun (though perhaps a little too romance novel for me). I liked that someone noticed invisible Andi, making their love story one you can easily get invested in. The novel’s main setback comes down to adult content in what feels like a young adult fantasy. The first half of the novel seems like a coming of age tale set in another world; then, once Rayfe and Andi come together, the writing becomes too graphic in content for the story that was previously being told. The love scenes are distracting and come across as inauthentic. I would have much preferred a cleaner version of this interesting fantasy novel. For those who do prefer a cleaner read (especially for a book that reads like YA throughout), I recommend just skipping a few way too graphic of scenes and get on with the rest of the very compelling story.

Overall, I enjoyed The Mark of the Tala and would very much like to continue reading the series (books 2 and 3 are about Andi’s sisters) to find out what happens in this world next.

Because of the fascinating world building full of romance, magic, wars, and royalty, I honestly believe this series would make for a great TV Show, one similar to Legend of the Seeker. There is a lot of material to work with for sure. I know I would tune in every week.

Our romance-themed entertainment site is on a mission to help you find the best period dramas, romance movies, TV shows, and books. Other topics include Jane Austen, Classic Hollywood, TV Couples, Fairy Tales, Romantic Living, Romanticism, and more. We’re damsels not in distress fighting for the all-new optimistic Romantic Revolution. Join us and subscribe. For more information, see our About, Old-Fashioned Romance 101, Modern Romanticism 101, and Romantic Living 101.
Pin this article to read later! And make sure to follow us on Pinterest.
By Autumn Topping on December 10th, 2014