Halloween is the spookiest time of the year, a time to believe in all things magical. What better way to celebrate than with some of television’s most supernatural couples of the past and present? 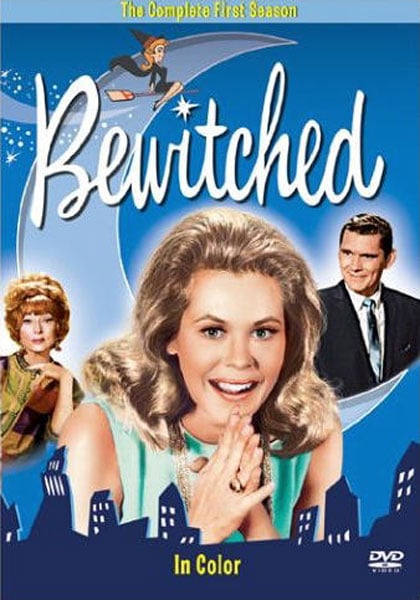 Let’s begin with a series that cast a spell on us and made a huge impact on fantasy series on television, the 1960s classic, Bewitched. The comedy centered on a beautiful witch named Samantha who marries the very mortal Darrin Stephens, and must contend with weekly magical interference with Sam’s mother, Endora.

The series showed Sam gladly giving up her most witchy ways to please her hubby, and anger her mother who took it out on Darrin with clever spells and lessons. Most of these would involve him turning into some kind of animal, shape shifting or disappearing all together. Not to say Darrin didn’t deserve some of these punishments, he was quite biased about magic and never seemed to learn his lesson.

Though in today’s world, Darrin would never be able to forbid Samantha from using magic and giving up her birth right, unless she made the decision. It would also have been nice to see Darrin mellow as the series went on and accept his wife’s powers on occasion; it might have saved him from many unpleasant transformations.

Despite all this, they were a couple to root for, often showing how much they love each other, being completely devoted to each other and having a family by series end.

Even the fights about Sam’s occasional use of magic or Darrin’s stubbornness and especially one of the most meddlesome mother-in-law’s ever, by the end of the episode both would come to terms with their differences, and prepare themselves for the next magical adventure, as there would be another magical episode.

Charmed also dealt with the supernatural, many say it is the series that jumpstarted modern fantasy series and demonstrated three strong, funny and butt-kicking female characters. Unlike Samantha, the Halliwell sisters, Prue, Piper, Phoebe and later Paige embraced their powers and were able to find men who accepted their gifts and encouraged them to never give up the craft.

Piper and Leo’s relationship, considered the main couple of the series, is particularly different from the Stephens’ marriage. One main difference is that throughout most of the series, Leo also had magical powers, which enabled him to understand, help and relate to his wife.

Another subtle difference is that unlike its predecessor, Piper was the half of the marriage that longed for a normal life without supernatural forces, while Leo was more comfortable with his powers, although he did offer to give them up for Piper should she ever ask.

The couple managed to eventually settle into a somewhat normal life with their kids, but the use of magic was not forbidden, instead embraced. Piper and Leo’s relationship dealt with many heartbreaks and magical interference, the Elders in the series were their Endora, but through it all they proved they were meant to be together and had the most successful, and often humorous, relationship of the series.

In more recent years there have been many more magical TV couples series like Roswell, Buffy the Vampire Slayer, The Vampire Diaries, Once Upon a Time, and most recently Witches of East End. These shows have each cast a spell on me, and each has made me root for the series relationships. But no matter how hard they try, none will ever be able to replace the simple, old school love of Darrin and Samantha or the funny, passionate romance of Piper and Leo.

What are some of your favorite Supernatural TV Couples?

Our romance-themed entertainment site is on a mission to help you find the best period dramas, romance movies, TV shows, and books. Other topics include Jane Austen, Classic Hollywood, TV Couples, Fairy Tales, Romantic Living, Romanticism, and more. We’re damsels not in distress fighting for the all-new optimistic Romantic Revolution. Join us and subscribe. For more information, see our About, Old-Fashioned Romance 101, Modern Romanticism 101, and Romantic Living 101.
Pin this article to read later! And make sure to follow us on Pinterest.
By Julia McCracken on October 31st, 2014