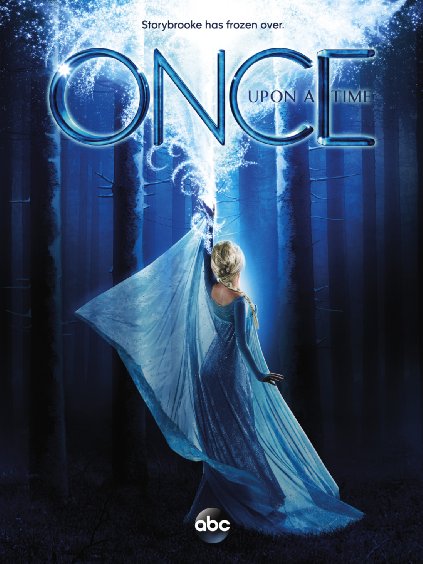 When we last saw our heroes, a number of exciting and challenging changes were introduced. Emma has decided to settle down in Storybrooke for good, accepting her magical powers as well as opening her heart up to Hook, something I’m sure many OUAT fans were pleased with. Belle and Rumplestiltskin are now married. Mary Margaret and David are now enjoying the experience of being new parents again. Regina’s happiness with Robin Hood is threatened due to Emma’s rescue of Maid Marian. And to top things off, a new character emerged from the portal through which Emma and Hook returned home in last season’s finale.

In this season’s premiere, the show introduces a few new characters fans of the recent Disney movies will be sure to recognize. The cast of Frozen appear to be next on the list of fairy tale characters to find their way to Storybrooke. From the flashbacks in the first episode, the audience learns of Elsa and Ana from Arendale. The story takes place after the events in the movie Frozen. Ana is to be married to Christophe and Elsa is once again the kingdom’s beloved queen. However, just before Ana’s wedding, Elsa finds a diary belonging to their mother that suggests that Elsa may have been the reason their parents left on the sea voyage that ended in their death. After discovering where their parents were really traveling to from Christophe’s troll family, Ana decides to leave on a mission to find out what her parents were really searching for and why. Her destination just happens to be the Enchanted Forest. Elsa decides to go after her, and somehow ends up in Storybrooke.

While Elsa is trying to find her bearings in this new world, Regina is dealing with her feelings about Robin Hood. While Robin professes to love Regina, he is too honorable to leave his wife to be with her. We see Regina once again turning to darker magic to solve her problems. The role of the magic mirror, Sidney, is revived in order to help Regina. By the end of the episode Regina settles on a plan to find the author of the Henry’s book of fairy tales and make him or her rewrite the stories so she can have her happy ending. The episode ends with a hint at Rumplestiltskin’s continued struggle with dark magic when we see him sneaking off in the middle of the night to open a magic box that turns into a wizard’s hat. It looks like Belle and Rumplestiltskin may not have gained their happily ever after just yet.

Episode two turns once again to the story of Elsa and Ana. Elsa, who found her sister’s necklace in Gold’s shop in the previous episode, has decided to build a giant wall of ice to surround Storybrooke in the efforts of locking the townspeople within it until they reveal where her sister is. This unfortunately causes the power to go out in the entire town. When Emma, David, and Hook go to investigate it’s cause they discover Elsa’s giant wall of ice, as well as Elsa herself. This results in Elsa panicking and accidentally trapping herself and Emma within a cave of ice. In an effort to hide her secret lack of control over her magic, Elsa threatens that she won’t release Emma until the others bring her Ana. This ruse, however, doesn’t work long on Emma, who quickly figures out that Elsa has no more idea of how to free them than she does. This sparks a tender scene in which the two bond over their shared difficulties with their magic powers. Unfortunately, this doesn’t change the fact that Emma is slowly freezing to death in the extreme cold.

Interspersed throughout these scenes are flashbacks to Ana’s story. Upon entering the Enchanted Forest, Ana finds David’s farm, asking if she can stay in their barn for the night. In an interesting twist, the nursery rhyme character Little Bo Peep then makes a grand entrance. She’s no sweet shepherdess though. Instead, Bo Peep is a powerful warlord who extorts money from David and his mother in exchange for allowing them to live on their farm in peace. If they don’t comply, Bo Peep threatens to take their farm and turn them into her slaves. Upon hearing this, Ana tries to encourage David to stand up against Bo Peep even taking the time to teach him the art of sword fighting. David doesn’t have the belief in himself that Ana does, however, and only decides to fight back when he discovers that Bo Peep has taken Ana prisoner and branded her with her shepherd’s crook so she can always locate her. As with all good tales, David wins in the end, rescuing Ana from Peep’s clutches and saving his farm. Just as Ana is leaving David’s farm, David’s mother reveals that only one wizard, Rumplestiltskin, has the power to help Elsa learn to control her powers.

Back in Storybrooke, David remembers this very encounter when he sees a picture of Ana’s necklace. The pair then pay a visit to Bo Peep in order to acquire her shepherd’s crook that should be able to locate Ana. Upon returning to Elsa and Emma, David is inspired by his experience with Ana, so he in turn encourages Elsa to believe in herself and use her magic to get out of the ice cave. Elsa screws up her courage and does indeed manage to break free of the ice cave. After their harrowing experience, the group returns to David and Mary Margaret’s abode where they all agree to help Elsa find her sister.

In case you were wondering where Mary Margaret was during all of this, she was in fact ambushed by the townspeople, and urged into accepting the job of the being town’s new mayor. So, it would seem Regina has been stripped of her former title, and Mary Margaret is the new lady in charge. Only one small factor still bothers Emma and Elsa, however, at the end of the episode. While Elsa was able to free them from the ice, she can’t seem to completely get rid of the huge wall surrounding the town. As she is supposedly the only person with this particular power, this just doesn’t make sense. As the episode is coming to a close, however, the show introduces a never before seen character (played by the immensely talented Elizabeth Mitchell!), who apparently has been running the local ice cream shop. And just before the credits role we see her freeze a batch of ice cream as well as the counter behind her with what would seem to be the same kind of magic as Elsa possesses. I think we have a new villain on our hands folks. Till next week.

Our romance-themed entertainment site is on a mission to help you find the best period dramas, romance movies, TV shows, and books. Other topics include Jane Austen, Classic Hollywood, TV Couples, Fairy Tales, Romantic Living, Romanticism, and more. We’re damsels not in distress fighting for the all-new optimistic Romantic Revolution. Join us and subscribe. For more information, see our About, Old-Fashioned Romance 101, Modern Romanticism 101, and Romantic Living 101.
Pin this article to read later! And make sure to follow us on Pinterest.
By Rebecca Lane on October 7th, 2014