About The Tower Princess

In honor of Tell a Fairy Tale Day, author Shonna Slayton’s new book, The Tower Princess, is on sale on the Kindle for 99c. This original fairy tale is a medieval Romeo and Juliet story with shades of Rapunzel.

The townspeople call her the Tower Princess, but Gressa’s life is no fairy tale. She’s never understood why she’s been separated from the rest of the kingdom, but now that she’s older the pieces are coming together.

For too long she’s been trapped in her brother’s scheme to find a way through the magical wall dividing their kingdom in two. She doesn’t expect any help from the prince to the south, even if he did manage to bumble his way to her rescue. If she could pick anyone to form an alliance, it would be the squire she watches train from her window; he shows promise. But, confined to her tower, there’s nothing she can do…or is there?

One day a hole opens up in the Dividing Wall and with it, a chance for Gressa to change everything.

The story starts with a boy and a girl. Meet Manny and Gressa as they begin their lives in a divided kingdom reigned over by two kings:

The king knew the Panther stalked at the wall. He felt his enemy’s restlessness grow every day. He knew his son would be in grave danger. The Panther would have no heart for a baby. Could he make a double funeral? Would it be convincing? Then he could send his son into hiding—away from his family to be raised as a commoner.

Wishing he had his wife’s wise counsel, he collapsed into a chair. He knew now, more than ever, what a pearl he had in Maggie.

While he was mulling over these thoughts, the nursemaid approached him, wringing her hands.

“I ‘ave a sister, newly widowed. She bore a babe yestreen and ‘as no way to care for ‘em. Bring ‘er into the castle to raise her son like he wos the prince. A decoy, as it may.”

The king stared unblinking at the nursemaid. Could he put someone else’s babe at risk? He was shamed for even thinking it.

“’T’would be her ‘onor to serve the king in this way,” said the nursemaid, sensing the king’s concerns. “’Tis for the safety of the prince.”

“And where would my boy go?” asked the stricken king, studying the baby, marveling at his tiny ears. Grief flooded his mind.

Smiling wide, the nurse revealed her crooked teeth. “Thar be a fine tailor and his wife in town. They ‘ave not been able to ‘ave children, much like yerself. He wonts an apprentice. They would be most agreeable. And ‘is wife would be sure to hide the true nature of the wee babe.” She stroked the prince’s cheek.

The king nodded, relieved that he wouldn’t have to send his son away. He could watch him grow up. But what kind of relationship would they have? Could he risk not letting his son know he was the prince until he had grown into a man? Simon pressed his hand to his temple to stop the throbbing. Then the babe awoke, screwed up his face, and let loose a piercing wail. The king wished he could scream too. Instead, he handed the child to the nursemaid with all the ideas.

In North Morlaix, the cry of the eighth child born to Jorvik’s wife rang out. This time, a girl.

The king stared at the babe. He was so used to having sons that he felt a bit awkward. His wife, too was a little shocked.

“It’s…a girl?” The king set down the sword he had brought with him. He had given each of his seven sons a sword at their birth. What did one give a girl? A shield mayhap?

“We can’t call her Thorwald like we planned,” he said.

Jorvik had never heard his wife laugh before. Once she started, she couldn’t stop. Her mirth was catchy and soon Jorvik also broke out in joyful noise. The child’s birth was the beginning of other changes in North Morlaix.

After much debate and suggestions from every member of the family and the court, the babe was named Gressa, meaning “pearl.” This made the old nursemaid raise an eyebrow, but she kept her tongue silent.

No one stepped into the castle without a quick look in on Gressa. Presents piled up. Fancy linens and imported silks. Gold jewelry and precious gems. Not to mention grain and chickens from the townsfolk.

Ingrid kept company with plaiters to learn how to entwine Gressa’s hair when she grew a lock or two. The princes of North Morlaix came to coo and make funny faces at the baby. In all, Gressa brought out a softer side of her family. In everyone except the Panther. 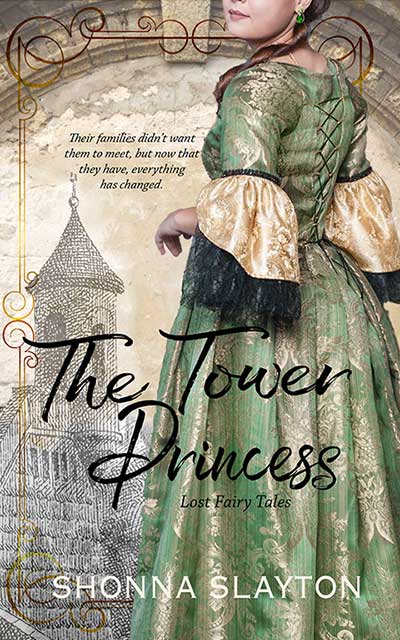 Why did you decide to write an original fairy tale?

This was a fun story for me. I’d been writing historical novels for a while and needed a story I could just write for fun and not have to spend so much time in research. This kingdom is made up. The time period is made up. And I’ve introduced new fairy creatures as well.

Where did you get the idea from?

I have a photo book on castles, and one of the castles featured is Burg Eltz in Germany. It’s a compact castle with these lovely towers, and while studying it, my imagination started down this path of a boy and girl being separated by a wall dividing their kingdom. Their parents are at war, and don’t want them to meet because they’re afraid they’ll fall in love.

How do you get the names of your characters?

Names have character, themselves, so I try to match the name with the vibe my characters are giving me. I tend to write about immigrants, so I’ll often start with their national origin. Then I go for the sound of the name, and then the meaning. In the Tower Princess I reveal the meaning of at least two of the characters’ names. Some names just hit you when you hear them. Don’t be surprised if we meet one day and I go crazy over your name and ask if I can use it in a book. It’s happened before.

Do you have a playlist when you’re writing?

Not on this book, but I do have an inspiration Pinterest board with some amazing images pinned: https://www.pinterest.com/shonnaslayton/fairy-tales-tower-princess/

You can buy The Tower Princess on Amazon HERE!

Our romance-themed entertainment site is on a mission to help you find the best period dramas, romance movies, TV shows, and books. Other topics include Jane Austen, Classic Hollywood, TV Couples, Fairy Tales, Romantic Living, Romanticism, and more. We’re damsels not in distress fighting for the all-new optimistic Romantic Revolution. Join us and subscribe. For more information, see our About, Old-Fashioned Romance 101, Modern Romanticism 101, and Romantic Living 101.
By The Silver Petticoat Review on February 26th, 2018