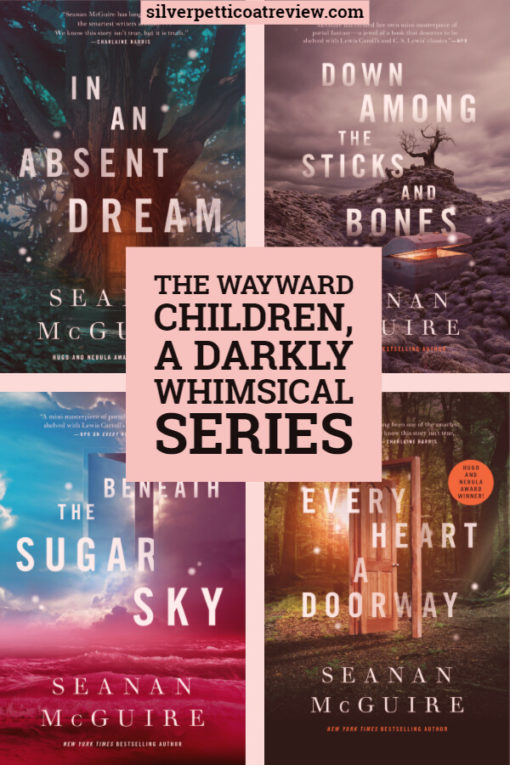 Book review of the dark fantasy series, the Wayward Children.

I remember the first time I heard the term “portal fantasy.” I was reading The Chronicles of Narnia and learned there was an entire fantasy world people got to by traveling through a portal. I spent part of my childhood looking for the doorway to Narnia or some other magical land. Though I never found one, these books hooked my imagination.

RELATED: Narnia: Behind the Wardrobe Door

Recently, I discovered Seanan McGuire had written a series of novellas, The Wayward Children, about the children who did find those portals. They all spent time in those other lands and then came home, but were unable to readjust to life in our world.

Some of them just don’t fit in, while some desperately want to go back to the strange world that they think of as home. The first novella, Every Heart a Doorway, was an Alex, Hugo, Nebula, and Locus-winning and World Fantasy finalist.

The first novella in The Wayward Children is Every Heart a Doorway. It introduces us to Eleanor West and the school that she runs for those children who, like her, miss their other life.

Our heroine is Nancy, who came from the Realm of the Dead. In this story, the portal wolds make up two of the following: Nonsense, Logic, Wickedness, and Virtue.

We also meet other characters like Kade, Sumi, Christopher, Jack, and Jill. When people begin turning up dead, Nancy sets out to solve the mystery, and maybe find her way back home.

Down Among the Sticks and Bones, the second book in the series introduces us to the backstory of twin sisters Jack and Jill. Their lives were perfectly scripted until they found themselves in a new and strange world. Here, all of their choices, no matter how small they seem, have serious consequences. Down Among the Sticks and Bones is one of the most horror-leaning of the series so far.

Book three, Beneath the Sugar Sky, is about a Nonsense World. The daughter of a student pops up and discovers her mother has died. Being from a land where things that are cooked and baked can come to life, there is a way around this. She sets out to save her mother, her world, and herself with her mother’s friends.

The fourth novella, In an Absent Dream, follows one of the teachers in her backstory. Lindy goes to the goblin market, a world based on logic and rules. In an Absent Dream is a prequel to the series and one of my favorites. At least until the fifth book, Come Tumbling Down, comes out in January. That will be following Jack and Jill again, and I love their stories.

The Wayward Children Series is beautifully and lyrically written, but it is also dark. Some of the worlds have vampires, mad scientists, and skeleton people. Sometimes, bad things happen. People are murdered or transformed, or go mad, and McGuire doesn’t hold punches.

We see all of this play out, and I think that the series is better for that. It is a perfect fall read. Despite the darkness, it’s still whimsical and full of magic.

RELATED: YA Book Review: Dorothy Must Die: A Dark Reimagining of a Classic Story

In the books, there are characters from all walks of life. Different races and sexualities represent well. The characters don’t clash because of these differences; they clash because people from nonsense worlds and logic worlds don’t always see eye to eye. I loved that.

If you like atmospheric stories with a spooky leaning that still manages to be whimsical, you might love The Wayward Children Series. And if like me, you grew up looking for a portal to a fantastic world, this might be a series to check out.

The Wayward Children series takes the concept of these portal worlds, which many of us looked for, and asks the question, what happens when you get back? Can you readjust to life here?

The answer, it looks like, is no. There will always be a part of you missing. Personally, I love the way that Seanan McGuire answered this question. She created the series I didn’t know I needed.

Content Note: There are some adult situations, violence, some swearing, and some brief references to sexual situations, but nothing graphic.

Have you read The Wayward Children by Seanan McGuire? Which one is your favorite? Let me know in the comments!