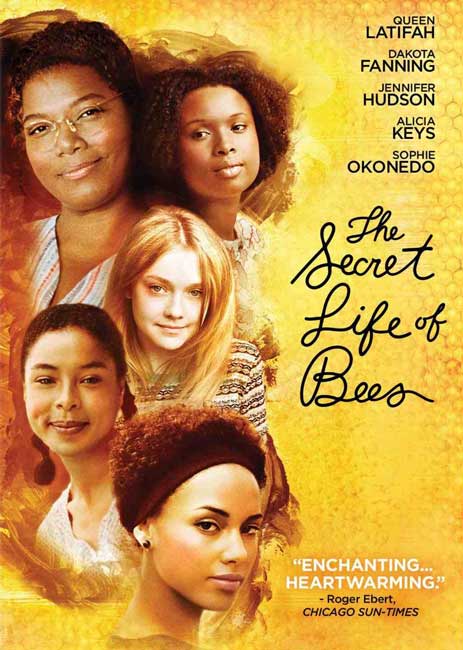 The Secret Life of Bees is a deeply moving coming of age film about a traumatised young girl and the beekeeping family of sisters who take her in. Based on the book by Sue Monk Kidd, the story follows Lily who begins with the startling revelation that she killed her mother when she was four years old. During an argument between her parents she got hold of a loaded gun and accidentally shot her.  The overwhelming guilt over this unintentional act forms a large part of Lily’s character.  The loss of her mother at such an early age left her with an abusive father unable to cope with his grief.  Her only friend is their housekeeper Rosaleen. When Rosaleen tries to register to vote shortly after the civil rights bill is passed, she is accosted and beaten by a group of white men.  Knowing that they will come for her again, Lily and Rosaleen run away from their respective tormentors.

Lily has a postcard of her mother’s with a picture of the Virgin Mary and the name of a town on the back.  She tracks down the home of the woman who makes the honey with this picture as a logo.  At the house she finds three sisters: August, May and June Boatwright.  August Boatwright had been a Nanny to Lily’s mother and gives her and Rosaleen a place to stay.  Each sister has a unique personality and play different roles in the family; August is the matriarch, June is the defender and May is their heart. While living with these fascinating women, both young women blossom into stronger, happier people.

The film has a great cast, boasting such names as Queen Latifah, Dakota Fanning, Alicia Keys, Sophie Okanedo, Jennifer Hudson and Paul Bettany. While each member of the cast turns in a spectacular and moving performance, Dakota Fanning truly inhabits her character, bringing Lily agonisingly and beautifully to life. Sophie Okanedo is also very good in the challenging role of May Boatwright.

It’s a very emotional, earthy journey set in a difficult and evolving time, with an uplifting conclusion. I especially liked that the film was about a group of independent, interesting women who are extremely modern in their thinking. The film discusses feminine strength and a girl’s need for a mother figure. There is also an underlying current of magical realism or spiritualism throughout the film that gives it an element of the fantastical that contrasts well with the stark depictions of the darker side of the sixties. The film has two very contrasting worlds, using grey washed out tones for when she is living with her father and depicting the pink house where she finds her true family in warm, golden shades. It is a subtle but effective way of conveying Lily’s mental state and quality of life in these different locations.

Despite the film taking place in the sixties, it often felt like decades earlier due to the poverty of some of the characters and the attitudes concerning race.There is a small but important love story between Lily and Zachary, August’s Godson. It is a sweet and innocent romance between two young people trying to find their way in a changing world.

The Secret Life of Bees is, despite its harsher aspects, a warm and hopeful story about a young girl’s journey into self-acceptance.

Our romance-themed entertainment site is on a mission to help you find the best period dramas, romance movies, TV shows, and books. Other topics include Jane Austen, Classic Hollywood, TV Couples, Fairy Tales, Romantic Living, Romanticism, and more. We’re damsels not in distress fighting for the all-new optimistic Romantic Revolution. Join us and subscribe. For more information, see our About, Old-Fashioned Romance 101, Modern Romanticism 101, and Romantic Living 101.
Pin this article to read later! And make sure to follow us on Pinterest.
By Elinor Cackett on April 24th, 2015