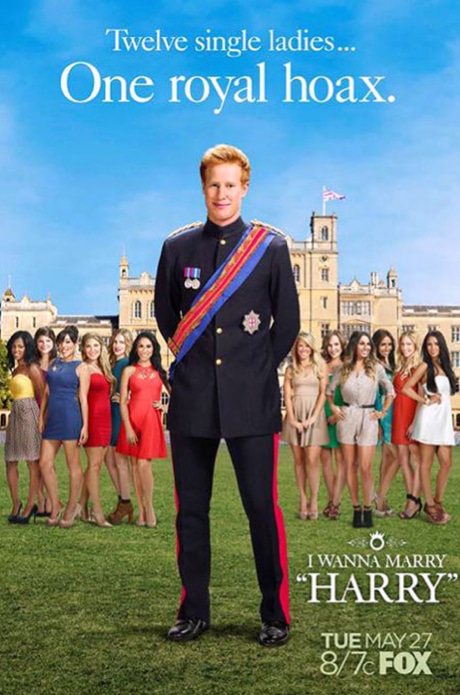 So, today’s post is somewhat random and a bit shorter than my past couple posts, but I just felt compelled to share this particular piece of entertainment news with the rest of you. Tonight began normally enough. I watched a bit of food network (a show that I have a love/hate relationship with, as I love it, but whenever I watch it I get really hungry. I can’t begin to imagine how much I would weigh if I just sat at home all day watching that channel…there’s a good chance I would be able to finally get on Biggest Loser…hmm that’s actually not a bad idea…), mouth watering and willpower fading with every minute. I was about to watch yet another food network show when I spotted a commercial for a new reality dating show on On Demand.

Let me first state that I think reality television shows are an abomination, and a very frightening vision of the possible future of television. They cater to all of our worst traits as human beings, the enjoyment of someone else’s humiliation, the secret voyeur in all of us, taking pleasure in the shortcomings and failure of others, etc. I think that for the most part reality television simply serves to provide us with fools to laugh at and feel superior to. After all, it’s the high drama that gets ratings and gets featured. The “boring” scenes where everyone is getting along get thrown on the cutting room floor.

I will, however, admit with more than a little embarrassment that reality dating shows are a secret weakness of mine, particularly the really trashy ones. I blame it on my sister who first convinced me to watch just one episode of Love Games with her one night. It was like witnessing a bad car accident, I just couldn’t look away from the horror. And the worse it became, the more catfights that erupted and the trashier it got, the more it sucked me in. It was so beyond me realm of experience that it fascinated me. I am ashamed to admit that I became hooked. So, once in a while I browse around to see if there are any new trashy reality dating shows on, the worse they are the better.

Well, tonight I found one that takes the cake. I think we have a possible new reigning champion of the horrible reality dating shows. I actually couldn’t believe that a show would go to these incredible limits, but once again reality television continues to surprise me.  FOX’s new reality television show, I Wanna Marry Harry, is in a twisted way completely brilliant. They found a Prince Harry look alike, who is actually in my opinion a major catch all on his own, to pose as the famous prince. Then they’ve managed to dupe twelve gorgeous, but clearly unbelievably shallow, women into believing that they are actually competing for the hand of the actually Prince Harry. I find this in itself to be absolutely astounding, and am actually impressed that FOX managed to find these gullible women. It would seem to me that it takes a very special person to actually believe that the wealthy, titled, and attractive prince of England would stoop to going on an American reality television show to find himself a girlfriend. I’m not sure the term gullible quite does it justice, there’s definitely a mix of wildly inflated egos involved as well. I mean…really? These girls truly think that they are not only on his radar, but that he would go out of his way to choose one of them to date. Someone certainly thinks they’re hot stuff. I’m still having a hard time grasping that this is real. It’s a lot easier to think that FOX just made this up and it’s all staged.

The second aspect of the show that flabbergasted me was the man they chose to pretend to be Prince Henry. He is actually excited to be getting the chance to date all these women. He sees it as a chance for him to date these beautiful women that he would have had no chance with as himself. The fact that they are only interested in him because they think he’s one of the world’s most eligible bachelors, a prince who could fulfill their fantasies of being a princess, doesn’t bother him at all. This nice normal guy feels lucky to be doing this. He believes he’s going to find his dream girl among these harpies. It makes part of me sad for him and his naivety, and part of me very disappointed in the male species. Show them a pretty face and a nice body and they’re hooked. I foresee a big let down and dose of reality in his future. I can’t see how this situation is going to end happily for anyone.

And with that said, I will admit that I cannot wait to see this show. The evil part of my soul is breathless with anticipation. I have officially crossed over the dark side.

Does the train wreck that will be this show secretly fascinate you as much as it does me? Sound off below…

Check out all of our blog posts here.

Looking for something else that just may blow your mind? Read Uncommon Wagers: Simple Bets That Lead to Extraordinary Fiction.