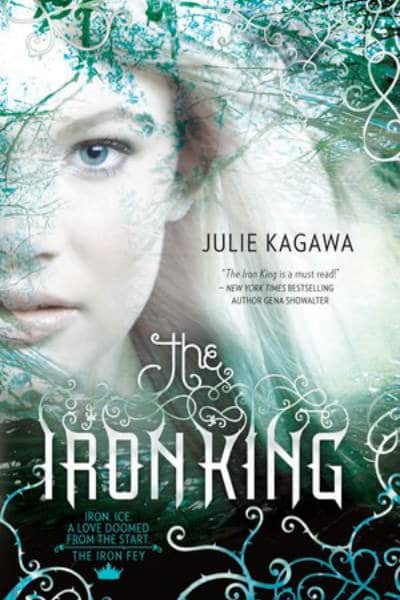 My name is Meghan Chase. In less than twenty-four hours I’ll be sixteen. Countless stories, songs and poems have been written about this wonderful age, when a girl finds true love and the stars shine for her and the handsome prince carries her off into the sunset.

I DON’T THINK IT WILL BE THAT WAY FOR ME.

And with that as the back-cover blurb, you know that it will be EXACTLY THAT WAY for our fair Meghan Chase, who has no idea how fair she truly is or how gifted or how talented or how destined or how desirable and loveable.

Julie Kagawa’s The Iron King (2010) is the first book in a tetralogy, a quartet of fantasy-romance books following the travails and triumphs of teen Meghan Chase in the world of humankind and fey. A further three, short, e-book stories complement the series for those readers wanting more of this Harlequin Teen series. A spin-off trilogy has also been written.

A Midsummer Night’s Dream to an Apocalyptic Nightmare

World’s collide on Meghan Chase’s sixteenth birthday. Her best friend, Robbie, reveals himself to be none other than Puck. Yup, the fairy Robin Goodfellow himself – mischief personified – is under orders from the Fairy King Oberon to protect his daughter, and Puck has done just that for the past sixteen years. Yes, Meghan is part fey, part human. And as a royal daughter of Oberon and a member of the Summer Fey, the Seelie Court, Meghan is a wanted ware and potential pawn for would-be extortioners, enemies, and a myriad of internecine intrigues.

RELATED: YA Book Review: The Falconer – A Story of Faery, Romance, and Steampunk Fantasy

But when her fully human, baby half-brother, Ethan, is kidnapped and replaced with a terrifying changeling, Meghan must enter the Nevernever, the fairy realm, to rescue him. The fey realm is fraught with dangers for mortals, fairies and half-bloods alike. Fairies are fickle creatures, cruel, generous, conniving. Queen Titania hates her. A mysterious, disappearing, all-knowing-but-little-revealing cat, Grimalkin, requires promises of her, the consequences and repercussions of which she does not comprehend. An uneasy truce between the Winter Court (the Unseelie) and the Summer Court (the Seelie) threatens to disintegrate as boundaries, treaties and traditions are trespassed. And a heretofore unknown force, a hidden realm in the Nevernever, is threatening the very existence of everything.

Can Meghan safely navigate this world? Can she save her brother and the Nevernever before it’s too late?

Star-Crossed, Forbidden Love with a Little Love Triangle Cast into the Mix

What would an adventure be for our young heroine without an adventure of the heart as well? That much used and abused trope of the love triangle is readily apparent here. The protective, wisecracking prankster Puck has loved and watched over Meghan for years. But a certain cold, aloof warrior prince of the Unseelie Court, the wintry Prince Ash, is teeming with pent-up emotions, just begging to burst for the right one. But is the right one a half-human, half-fey Seelie? Because it is strictly forbidden for Seelie and Unseelie to have relations, for Winter and Summer to fraternize. Puck and Ash have an ancient and deadly gripe that is only being exacerbated by the presence of the alluringly loveable Meghan…

If this was ever to make it cinematically, it would probably have to be a series. The world-building is so detailed and intricate that it would be difficult to cram all that into a feature-length film. I could actually envision this as an anime series.

Content Note: Some very few instances of minor swearing, otherwise nothing to come after.

Our romance-themed entertainment site is on a mission to help you find the best period dramas, romance movies, TV shows, and books. Other topics include Jane Austen, Classic Hollywood, TV Couples, Fairy Tales, Romantic Living, Romanticism, and more. We’re damsels not in distress fighting for the all-new optimistic Romantic Revolution. Join us and subscribe. For more information, see our About, Old-Fashioned Romance 101, Modern Romanticism 101, and Romantic Living 101.
Pin this article to read later! And make sure to follow us on Pinterest.
By Jessica Jørgensen on October 17th, 2017