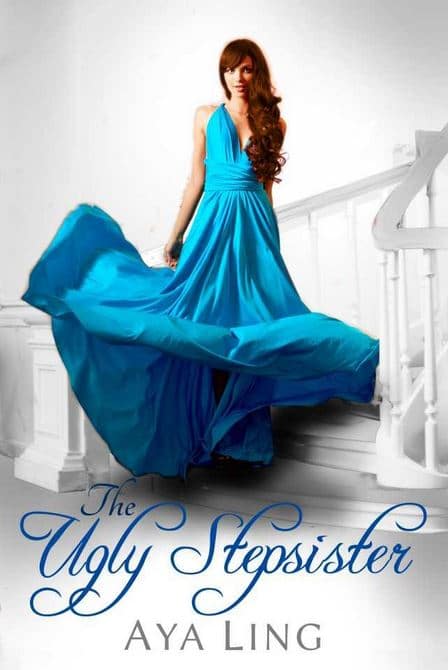 THE ECLECTIC INSPIRATION FOR A FAIRY TALE RETELLING

I wasn’t supposed to write this book. I was outlining book two for my historical mystery series, while editing a middle-grade fantasy. But then this idea for a Cinderella retelling took root in my head and wouldn’t stop pestering me, so I shoved the outlining aside and slowed down my editing. I just had to get this fairy tale retelling done.

Several readers have commented on the creativity of the premise: a modern girl gets sucked into a fairy tale world when she rips apart an old book. Then she’s told she has to complete the story, has to make that Happily Ever After happen, or she’d be stuck in the book forever. The idea is hardly new–I think my subconscious called up the Inkheart trilogy in which the characters also enter a magical book (fantastic series!). But why is this triggered off from shredding a book? Well, I was trying to make room in my bookshelf for some shiny new books (I’m sure bookworms can emphasize with this), and came across this Ice Age fossil below: 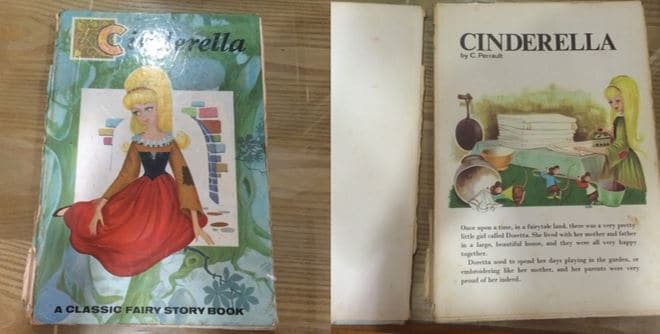 The cover, which has completely fallen off, mirrors the old book mentioned in The Ugly Stepsister

Even though I’ve read Kondo Marie’s Life-Changing Magic of Tidying Up, I wasn’t quite ready to toss away this book that I’ve read in kindergarten. Luckily, the sentiment has paid off. The downside is that I’m using this as an excuse to put off cleaning my room. Who knows when the next lightning moment will strike?

Anyway, the book probably still wouldn’t have happened if I wasn’t reading Thorn by Intisar Khanani at the moment. Thorn is actually a Goose Girl retelling–and an excellent, beautifully-written one, by the way. But what on earth can The Goose Girl provide inspiration for Cinderella?

First, the romance. I don’t think I’m actually posting a spoiler, unless you haven’t read Goose Girl. Well, the prince notices the princess-turned-goose-girl and goes out of his way to talk to her. I found this really intriguing–that the prince didn’t settle for the one he’s supposed to be with (the servant-turned-princess) and was instead attracted to the more sympathetic character of someone that’s much lower in rank. While this isn’t exactly what happened in my own book, there is a similarity in how the prince “discovers” his love interest—the girl he isn’t expected to fall for.

Second, the social issues. In Thorn, the protagonist speaks to the prince of poverty and class, which she came to care about while she was forced into the role of a servant. Since my heroine, Kat, is from modern day America, she should notice that her bizarre book world would have a more rigid social order. I remembered reading about child labor in Dickens, did a bit research about it, and bam! I spent months taking notes about the Victorian age, and how its culture might fuel the plot. Child labor was really horrifying and I was glad when I read about the actions taken to stop it, which predictably, inspired part of the story.

But not just gruesome details made their way into The Ugly Stepsister. From my research, the London Season became a huge influence and in particular, the ritual of debutantes being presented to the queen became a major plot point, and one of my favorite scenes in the book. When I read that girls had to wear a backboard to develop the right posture and practice sweeping across the room in a dress with a train, I knew I had found a great method for torturing Kat creating conflict and tension.

Basically, Kat has to dress in costumes shown in the picture above every day.

And so, 10 months and 100, 000 words later, The Ugly Stepsister is finally done. While I still cringe at the amount of research that went into the book (only about 10% was actually used), and the numerous rewrites based on numerous comments from beta readers, the process was worth it.

A screenshot of my research notes: 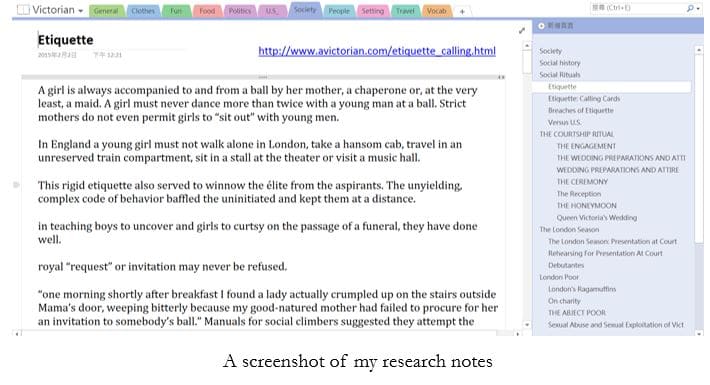 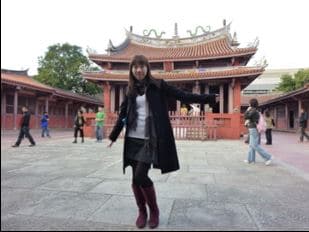 Aya is from Taiwan, where she struggles daily to contain her obsession with mouthwatering and unhealthy foods. Often she will devour a good book instead. Her favorite books include martial arts romances, fairy tale retellings, high fantasy, cozy mysteries, and manga. Her latest release, The Ugly Stepsister, is released on June 12th.

Our romance-themed entertainment site is on a mission to help you find the best period dramas, romance movies, TV shows, and books. Other topics include Jane Austen, Classic Hollywood, TV Couples, Fairy Tales, Romantic Living, Romanticism, and more. We’re damsels not in distress fighting for the all-new optimistic Romantic Revolution. Join us and subscribe. For more information, see our About, Old-Fashioned Romance 101, Modern Romanticism 101, and Romantic Living 101.
Pin this article to read later! And make sure to follow us on Pinterest.
By The Silver Petticoat Review on June 19th, 2015