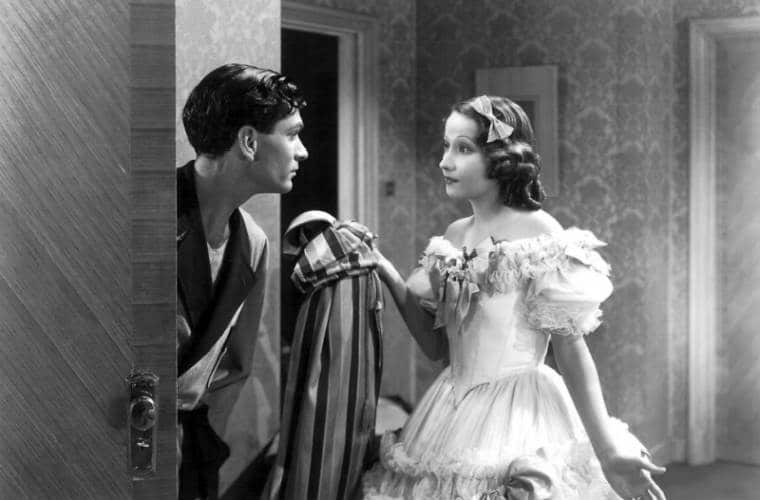 The Divorce of Lady X Review

At the beginning of 1938 movie The Divorce of Lady X, things couldn’t be better for Everard Logan (Sir Laurence Olivier), a promising young divorce lawyer. His future looks bright. He has infatuated ladies vying for his attentions. Even on a night when there is so much fog in London that cabs cannot take passengers home, he manages to find a room to himself in a crowded hotel.

However, his happy existence takes an unexpected turn that foggy London night. There is a huge masquerade ball going on in the hotel, and the guests are stranded, unable to leave because of the lack of visibility. The hotel manager tries to accommodate some of the ladies by asking guests with rooms to let them sleep in their suites. When he asks Logan for some assistance, he is coolly rebuffed.  Logan you see believes he knows women very well and having one of them sleep on the sofa in his living room would be asking for trouble. He’s quite proud of his ability to read  female behavior. Apparently, it’s part of the reason he’s such an accomplished lawyer. “No I know the ladies, and I know myself,” he says. “They’d have me out of here in five minutes.”

The hotel manager then goes off to find a more accommodating guest. Unknown to them, one of the stranded ladies, (Merle Oberon) has heard their conversation.  She decides that she will win over Logan’s objections and settle down in his suite. Despite some griping, he finds himself somehow unable to refuse the mystery lady who will only identify herself as Leslie. He can’t resist her cheerful, charming ways, and she stays the night dressed in his pajamas. From then on Logan’s comfortable, confident existence is shaken up exceedingly.

The result is a delightful movie that ticks off all the essential requirements of the romantic screwball comedy. Misunderstandings, confusion, and silliness abounds. Of course the pair, haphazardly brought together, falls in love. Logan believes that Leslie is married, but he is so smitten with her he doesn’t care though it might cost him his job when a conflict of interest arises.

Leslie decides to teach him a lesson when she realizes how arrogant he is. And she contrives to keep him guessing about who she really is. In another sort of movie, some of her manipulations might be considered cruel, but not in this sort of old-fashioned farce. We know that no one is seriously hurt and everything will turn out just fine. As the story unfolds, you’ll grin and chuckle as the various entanglements smooth out.

Related | Vintage Film Review: I Was a Male War Bride (1949) – A Saucy Romantic Comedy with Slapstick

Of course, the main players in The Divorce of Lady X are what makes it the most enjoyable.  I’m used to seeing Laurence Olivier and Merle Oberon in heavier, dramatic roles, but they both get to let loose and have fun with this one. And, as always, they carry out their parts well. As Logan, Olivier is frazzled, anxious and vulnerable all because of Merle Oberon’s Leslie, who is charming, playful and exasperating while being a perfect angel in the morning (in Logan’s opinion at least).

Furthermore, Oberon avoids being annoying. On the contrary, you find yourself on the side of this loveable trickster. It becomes easy to see why Logan is smitten with her and finds himself willing to risk everything to be with her. Surely the fact that she always looks divine should justify the poor man’s inability to resist her.

The romance in this is delightful. The two fall in love rather quickly, but it’s a pleasure to watch them play off each other as Logan tries to get the impish Leslie to be serious, and she evades him easily. “How do you know so much about women?” she asks him after he lectures her. “Because in my profession I have to be able to see what’s behind those lovely deceiving lips!” he admonishes. “Are you a dentist?” queries Leslie.

With such enjoyable squabblings, we, the audience are quite content to watch them find their way to their inevitable understanding. “I think he’ll marry me,” Leslie says airily to her grandfather after the eventful night. No, Logan hasn’t proposed and as Leslie points out, “He doesn’t know about it yet”, but of course they will get together! Seeing the usually scornful and patronizing Logan falling for Leslie is endearing, charming and extremely satisfying. “What am I doing kissing you?!” he wails in bewilderment when he succumbs to her enchantment in his office where someone might discover them.

If you want to get swept up in an engaging and absurd, old-fashioned comedy, you won’t be disappointed if you allow yourself to get caught up in the adventures of Lady X. In the US, The Divorce of Lady X is available on Amazon Prime and Hulu.

What do you think about The Divorce of Lady X? Sound off below…

Our romance-themed entertainment site is on a mission to help you find the best period dramas, romance movies, TV shows, and books. Other topics include Jane Austen, Classic Hollywood, TV Couples, Fairy Tales, Romantic Living, Romanticism, and more. We’re damsels not in distress fighting for the all-new optimistic Romantic Revolution. Join us and subscribe. For more information, see our About, Old-Fashioned Romance 101, Modern Romanticism 101, and Romantic Living 101.
Pin this article to read later! And make sure to follow us on Pinterest.
By Dixie-Ann Belle on October 31st, 2016