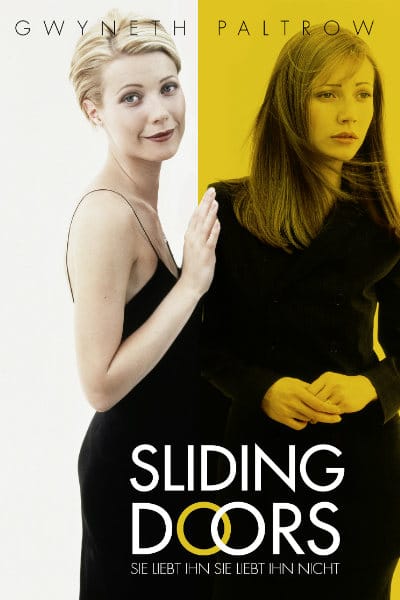 There are divergent and life-altering repercussions for Helen for catching that train and for missing that train. Consistent with both dimensions is the deadbeat, cheating boyfriend, Gerry (John Lynch), who needs to get the boot. In the reality where Helen drops Gerry sooner rather than later, a gentle love affair develops with the witty, affable, delightful, very dear James (John Hannah). Can true love make its mark across two temporal realities?

Upon being fired from her PR job, Helen Quilley heads for the tube to head on home. And it is here that the storyline fractures, beginning to show us the parallel timelines for the Helen who made the train and the Helen who didn’t.

Timing – It’s All About Timing 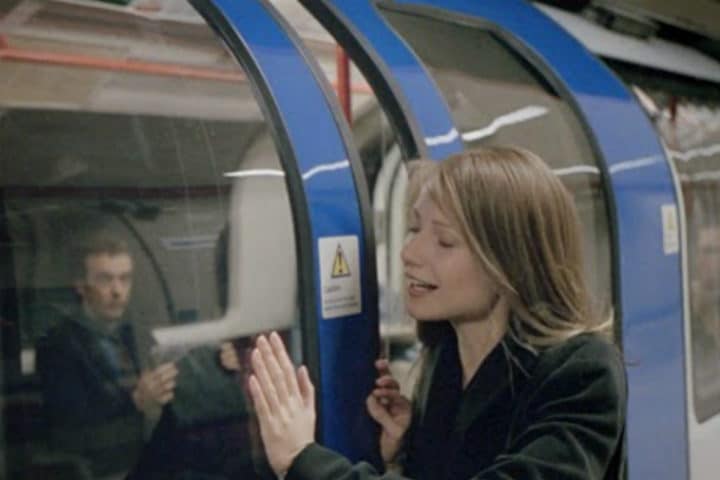 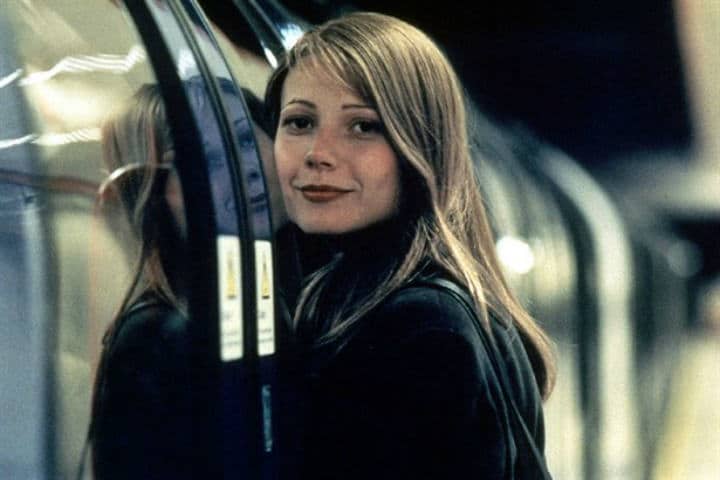 The no good, lying, cheating boyfriend – whom Helen is supporting, so he can focus on writing his novel – is having a liaison in their bed with his loud, American, supposed ex, Lydia (Jean Tripplehorn). The Helen who caught the train gets home early and catches them in the act. This is the same Helen who had a chat on the train with a stranger. The same stranger who finds her drunk and sad at a bar later that night.

The stranger, who is no longer a stranger, is the lovely, gentlemanly James. He becomes a steady support to Helen during her breakup with Gerry. It is he who encourages her to start her own PR business and helps her land her first big gig. It is he who gets her laughing again. This Helen begins to take her own life into her hands. She gets a new hairdo and gains in self-confidence.

Now, the rather sad Helen, who missed the train, never discovers Gerry’s tryst in their bed. She does notice odd behavior, things out of place; she gets suspicious. But she’s just so harried and tired. Still having to support the deadbeat Gerry, Helen takes on two jobs, one as a sandwich delivery lady – delivering sandwiches to the offices similar to where she once worked – and another as a waitress. Gerry’s still getting it on with Lydia, feeling all sorts of angst and remorse, but not really doing anything about it. Lydia’s making demands, wanting Gerry to make a choice, and manipulating things into play so Gerry can’t avoid a decision any longer.

Both timelines come to a head when a major misunderstanding threatens to derail James and Helen’s burgeoning relationship, and when Lydia forces a confrontation. I won’t spoil the plot with the details or the repercussions. But you will cry.

Sliding Doors is more drama than comedy. The story – on the one hand – is about a woman who is just stuck, stuck in her life and its trajectory and just not really living, taking chances, believing in herself and her worth. And yet, we get glimpses of this other Helen, who is blossoming, living, laughing, taking ownership of her life and its course. And these two Helens and their tales interweave rather wonderfully throughout the film. We bounce between them, and we all know which Helen we’re rooting for, which one we hope will prevail.

Although, Sliding Doors does throw a mean curveball at the end. Nope, nope, I’m not spoiling it. 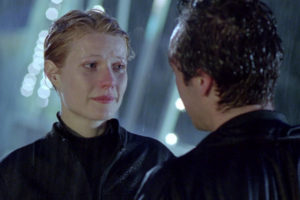 The acting is grand in Sliding Doors. Even the blasted Gerry is disarmingly charming. Gwyneth Paltrow and John Hannah have great chemistry. You just can’t help yourself but love John Hannah – that accent, that easy manner, that wry humor. Sigh. And even Jean Tripplehorn plays the uber-wench Lydia with aplomb and vulnerability.

Suffice it to say, you’ll be crying, sighing, laughing and just rooting for Helen to get her life together and just loving the wonderful James in this transtemporal romance.

Content Note: Rated PG-13 for minor language, scenes of sensuality and mature thematic content. There is a fair amount of minor swearing, although said in lovely British/Scottish accents, so it feels more quaint than offensive. And a plot element throughout the entire film is this disloyal boyfriend, who is cheating on poor Helen.

Where to Watch: Netflix DVD, iTunes, Vudu, or buy on Amazon.

Our romance-themed entertainment site is on a mission to help you find the best period dramas, romance movies, TV shows, and books. Other topics include Jane Austen, Classic Hollywood, TV Couples, Fairy Tales, Romantic Living, Romanticism, and more. We’re damsels not in distress fighting for the all-new optimistic Romantic Revolution. Join us and subscribe. For more information, see our About, Old-Fashioned Romance 101, Modern Romanticism 101, and Romantic Living 101.
By Jessica Jørgensen on December 6th, 2017