Official synopsis of A Shadow Bright and Burning:  I am Henrietta Howel. The first female sorcerer in hundreds of years. The prophesied one. Or am I?

When Henrietta Howel is forced to reveal her unique power—the ability to control flames—to save a friend, she fears she will be executed. Instead, she’s invited to train as one of Her Majesty’s royal sorcerers and declared the chosen one, the girl who will defeat the Ancients, bloodthirsty demons terrorizing humanity. She also meets her fellow sorcerer trainees, handsome young men eager to test her power and her heart. One will challenge her. One will fight for her. One will betray her.

But Henrietta Howel is not the chosen one.

As she plays a dangerous game of deception, she discovers that the sorcerers have their own secrets to protect. With battle looming, how much will she risk to save the city—and the one she loves?

A Shadow Bright and Burning Review 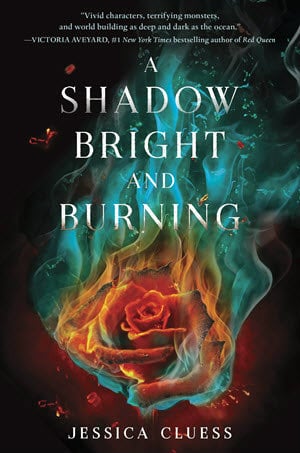 First, a confession. I picked this book up because of the cover. It’s gorgeous. Eye-catching. Then, I read the synopsis. Intriguing. But truly, the cover captured my interest. And I’m so glad it did. Wow. Just wow. A Shadow Bright and Burning is a fabulous story. There’s action, magic, sorcery, deception, and romance! Henrietta is a spectacular character. Complicated and filled with secrets. You will willingly read into the wee hours to unpack this interesting, fearless character. In addition, you will equally love the dynamic secondary characters. Still, it’s Henrietta that truly stands out. She’s fierce and loyal, not to mention funny. The story revolves around her and you will not want it any other way.

Related Post | The Belles Book Review: An Enticing Tale of the Price of Beauty

What I love about A Shadow Bright and Burning is how it takes the chosen one trope and twists it upside down. And then there are the men surrounding Henrietta. Especially Rook, her childhood friend, Magnus, a fellow sorcerer, and Lord Blackwood, another sorcerer and the benefactor of the orphanage and school where Henrietta and Rook lived.

First, it’s not a love triangle! Not in the typical sense at all. While all three clearly have eyes for Henrietta, there is none of the fighting over who will have her. Nor is Henrietta ever in a position where she must choose. The focus is on Henrietta and her viewpoint on these three dashing men. How each one is important to her for various reasons. Especially Rook. Her connection with Rook is deeper. However, all three men are swoon-worthy in their own way. I’m partial to Lord Blackwood because he’s the brooding one of the three. Honestly, he’s like Mr. Darcy. With a title. And he broods just as good as Darcy. I like those that brood!

A Shadow Bright and Burning would be stunning on the screen. I think a series on HBO or Starz would be ideal for budgetary reasons. They have larger budgets for special effects, and that is what A Shadow Bright and Burning needs. Also, a fantasy series you can watch with your family is a bonus! Second, the costumes. This is Victorian London after all and there are balls to attend! Plus, and this goes hand-in-hand with special effects, the Ancients are creepy and anything less than the best would make them a caricature on screen.

Final Thoughts on A Shadow Bright and Burning

Author Jessica Cluess creates a fantasy Victorian London that is wholly unique. It’s a London on the verge of collapse, surrounded by magnificent Ancients bent on destruction. The monsters are scary, the sorcery awe-inspiring, and the action breathtaking. Each scene is vivid. Fair warning, though, this book is fast. You will whip through the pages in an attempt to keep up with Henrietta. She will surprise you, as will many of the other characters. I loved this book because of those surprises. The characters never did what you thought they would do. Whether while fighting, or training, or even at a ball, the characters moved in unexpected directions.

A Shadow Bright and Burning is a page-turning fantasy you will devour in hours! I promise it’s worth the late night!

By the way, this is book one of a three-part series. A Poison Dark and Drowning is available to read now! A Sorrow Fierce and Falling is due out this fall!

Have you read A Shadow Bright and Burning? Are you a fan of the series? Drop me a line below and let’s talk!

Our romance-themed entertainment site is on a mission to help you find the best period dramas, romance movies, TV shows, and books. Other topics include Jane Austen, Classic Hollywood, TV Couples, Fairy Tales, Romantic Living, Romanticism, and more. We’re damsels not in distress fighting for the all-new optimistic Romantic Revolution. Join us and subscribe. For more information, see our About, Old-Fashioned Romance 101, Modern Romanticism 101, and Romantic Living 101.
Pin this article to read later! And make sure to follow us on Pinterest.
By Catherine on August 21st, 2018