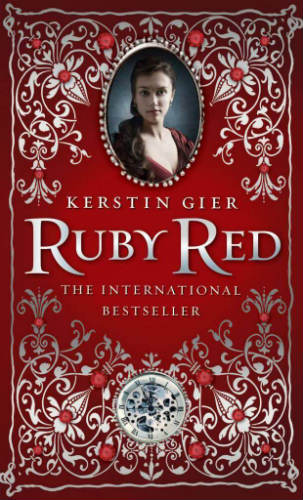 Originally written in the authors’ native German language, Ruby Red has since been adapted into English text and continues to be a popular YA novel. With a fun and creative storyline to its name, the adventures of heroine Gwyneth Shepherd are great fun to tag along with.

RELATED | The Orphan Queen – A YA Fantasy Lover’s Dream

Gwyneth Shepherd’s normal high school life which she enjoys with her best friend, Lesley (whom she keeps no secrets from) is about to forever change. As her eccentric family is wrapped up in her cousin, Charlotte’s rite of passage as a time traveler, Gwen is free to come and go with few restrictions. This is not so for Charlotte who must take part in one series of training exercises after another. But Gwen’s mother has kept a secret for many years, a secret that soon reveals Gwen is the carrier of the time travelling gene.

In an instant, Gwen’s life turns upside down. Not only does she travel to the past three times in the same of hours, she is thrust into the secret society that is her family’s legacy and meets the arrogant Gideon. A time traveler too, Gideon is Gwen’s travelling companion. With sparks flying between the two, Gwen must navigate the secrets of her own ancestry as she discovers Gideon has secrets of his own.

As someone who hasn’t read many time-travelling books, this genre was outside the box reading. That said I found it endlessly fascinating. The concept is really good and the line-up of characters full of surprises and in many instances, depth. Even the leading hero, Gideon (who is described as an “obnoxious know-it-all” in a Goodreads description) is considerate and a gentleman. Originally written in German, I think there were a few things that were lost in translation or maybe the story is more about the “overall” premise rather than specifics since this trilogy follows the same heroine.

Beyond this minor criticism, I can honestly say I enjoyed this novel. It’s fast-paced which is sure to keep reader’s attention, and the lavish trips into the past will appeal to any period drama or history lover. The costumes are described beautifully, and I liked seeing the eras through Gwen’s first-person narrative. In fact, in Ruby Red, the trips into the past are far too infrequent although I suspect we’ll see more in subsequent novels (Sapphire Blue, Emerald Green), which are already translated and available in the US. I often visualized the family and some instances of the settings of the film adaptation of Beautiful Creatures.

Ruby Red does a nice job as an introduction novel. It sets up the primary players and begins the slow unravel that is Gwen’s past, present and future destiny. The setting (London) is lovely (I find fiction is too often set inside the familiarity of the US) inspiring an armchair adventure unlike any other because of the time travelling connection. Those who like Doctor Who or anything that relates to time travel should enjoy this YA fantasy novel. The romance is kept subtle (although the final chapter intensifies things), but there are plenty of sparks between Gwen and Gideon, which I suspect will become something more in the sequel and beyond.

Content Note: There is nothing offensive in this novel in my estimation. There is an instance of violence (a duel), but it never becomes descriptively graphic.

If you like films such as Timeline or The Time Traveler’s Wife (completely different stories, but time travel is prominent), you’ll likely enjoy this fast-paced YA novel. Also, fun fact, this was adapted as a film in its native German language. I’ve read it can be found on Youtube (though I’ve never searched for it). If US filmmakers adapted this (soon), I could see Lily James potentially taking on the role of Gwen. She’s proven she can play normal and sweet as well as fierce. Or I’ve seen Daisy Ridley (recently of Star Wars fame) touted as a capable actress to take on many YA characters. I’ve never seen her in anything, but her looks fit the image we often see of Gwen. Jeremy Irvine who co-starred in Beautiful Creatures might be a good candidate for Gideon. I could also see Douglas Booth play the “arrogant” card really well. He’s really good-looking too, although, in terms of resembling Gideon (who is described as having shoulder-length hair), I don’t know if he could pull it off.

Have a look at the book trailer:

Have you read Ruby Red? What did you think of this novel? Who would you like to see play Gwen? Comment down below with your thoughts!

Our romance-themed entertainment site is on a mission to help you find the best period dramas, romance movies, TV shows, and books. Other topics include Jane Austen, Classic Hollywood, TV Couples, Fairy Tales, Romantic Living, Romanticism, and more. We’re damsels not in distress fighting for the all-new optimistic Romantic Revolution. Join us and subscribe. For more information, see our About, Old-Fashioned Romance 101, Modern Romanticism 101, and Romantic Living 101.
Pin this article to read later! And make sure to follow us on Pinterest.
By Rissi JC on July 6th, 2016