THE SHOW: Star Trek: The Next Generation (Season 3, Episode 15)

“Yesterday’s Enterprise,” episode 65 of the widely popular television reboot of the Star Trek franchise, Star Trek: The Next Generation (1987-1994), is often considered by Trekkies as one of the top ten episodes ever made among all the many spin-offs, series and reboots throughout the years. It is a classic and for good reason.

The Enterprise-D meets a ghost from its past, when a temporal rift brings the Enterprise-C, the immediate predecessor to the current Enterprise, into the same time and space of its future reincarnation. The Enterprise-C was – or, rather, should have been – destroyed in battle with Romulans while responding to a mayday signal from a Klingon outpost over twenty years prior.

In this transgression of the temporal rift, the future irrevocably alters, meaning that the present-day Enterprise is changed. Gone is the peaceful starship with families and scientists out to explore the universe through observation and mediation. This Enterprise is a battleship, with well-trained and war-weary soldiers obeying clipped orders. The Federation is losing a decades-old war with the Klingons, a war that has cost billions of lives.

RELATED: Romantic Moment of the Week: Spock and Uhura – “What Do You Need?

None onboard see how this future, this present-day, is off. Only Guinan (Whoopi Goldberg), an ancient and mysterious being of much insight and wisdom, senses that something is not right.

“This is not the way it’s supposed to be.”

And there she is – Lt. Tasha Yar (Denise Crosby), tactical officer of the Enterprise, is alive and well in this alternate reality. For regular watchers of the show, Tasha died a shockingly pointless death back at the end of Season 1. And yet, here she is again, manning her post like the capable soldier she is. Guinan is uneasy around her.

The badly damaged Enterprise-C must return to its own time, must be destroyed in battle, must lay down the life of its crew for the sake of a Klingon outpost. That sacrifice is the key to peace negotiations between the Klingons and the Federation decades prior, the event that will prevent this bloody reality.

But there he is – Lt. Richard Castillo (Christopher McDonald), the handsome helmsman from the time-traveling Enterprise-C. Sparks fly as soon as he meets Lt. Yar.

Lt. Richard Castillo partners with Lt. Tasha Yar to have a crash course in over twenty years of tactics and technology. Spending so much professional time together talking shop, they also begin to let down their guards and get personal, sharing their fears and hopes and dreams. They laugh together.

The chemistry between these two is palpable. But with Klingons attacking on this side of the temporal rift and Romulans on the other, whatever burgeoning attraction and smoldering sparks of tenderness that are growing and igniting are continually dampened and squelched by duty and the intense imminence of annihilation. Richard and Tasha are time-crossed, would-be lovers, who simply have no time, no future.

Death tolls rise as Klingons attack. Tasha worries over Richard’s fate and is informed by the android Data that if the temporal rupture fixes, if the crew of Enterprise-C is successful in their task at righting the past, she will have no recollection of Lt. Castillo. This distresses her.

All they have is this moment in time or out of time, as it were, wishing for more time. Richard accepts his fate, what must needs be, and prepares to return to his ship. His captain is dead, so he will lead the remaining members of his crew through the temporal rift, back into the battle with the Romulans, back to certain death. He and Tasha share a first kiss, a farewell kiss, of such longing of what might have been in another time and another place. It is a tender and passionate forever goodbye. 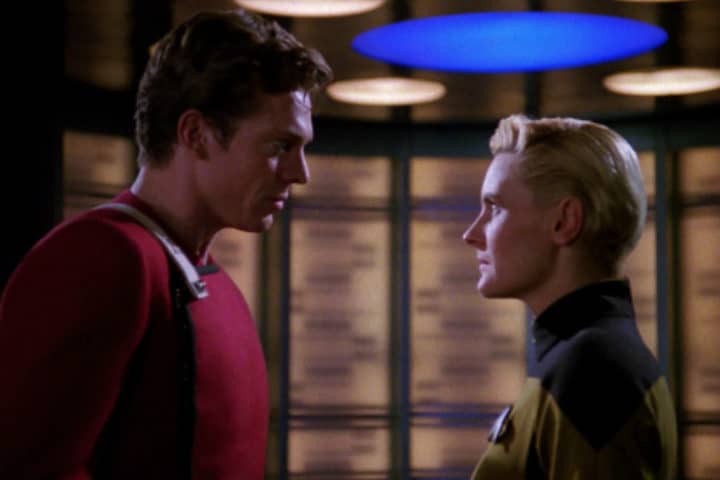 Haunted by Guinan’s awkwardness around her, Tasha seeks her out. Guinan reveals that in the timeline, which they hope to reestablish, Tasha is unknown to her. Tasha then realizes that she does not exist in that timeline. And when Guinan senses a great pointlessness to her non-existence, Tasha makes up her mind. She will join Lt. Castillo aboard the Enterprise-C, travel through the rift, and die an honorable, purposeful death. She chooses her fate, chooses time, and a few more moments by Richard’s side. Together, they will face the inevitable.

So there she is, standing on his bridge, and reporting for duty. Incredulous, he asks her what she is doing. He tells her to leave. She maintains that Captain Picard sanctioned her transfer. He tells her they fly to certain death, that it’s no lark. She responds, “I know the mission. These are my orders, Lieutenant.”

Quietly and pleadingly, fighting back emotions, he tells her that he doesn’t want her here. She looks him in the eye and dares him to find a more competent crew member to man tactical than her. He looks at her with such respect, such sadness, such joy, such gratitude, almost smiles, and welcomes her onboard.

“Take your station, Lieutenant,” he orders, as he steps away from her to take his seat in the captain’s chair.

“Aye, sir,” she responds, moving to her position.

Their fates are sealed – together, Lt. Tasha Yar and Lt. Richard Castillo.

And if you’ve got dry eyes at the end of this moment and this episode, well, there just might be something wrong with your tear ducts. It is not a fan favorite for nothing.

RELATED: The 30 Best Romantic Space Operas in Film and Television

All returns to normal. The Enterprise-C’s sacrificial mission is successful and no one remembers a thing. Except for Guinan, who senses that something has happened, and turns to a crew member and says, “Tell me about Tasha Yar.”

EXTRA SPOILER: Or was her fate sealed? In later seasons, a Romulan, eerily resembling Tasha Yar, makes an appearance…I will say no more, but can only highly recommend the series, which you can binge-watch on Netflix.

Were you a fan of this episode? Did you love Lt. Tasha Yar and Lt. Richard Castillo? Let me know in the comments!

Our romance-themed entertainment site is on a mission to help you find the best period dramas, romance movies, TV shows, and books. Other topics include Jane Austen, Classic Hollywood, TV Couples, Fairy Tales, Romantic Living, Romanticism, and more. We’re damsels not in distress fighting for the all-new optimistic Romantic Revolution. Join us and subscribe. For more information, see our About, Old-Fashioned Romance 101, Modern Romanticism 101, and Romantic Living 101.
Pin this article to read later! And make sure to follow us on Pinterest.
By Jessica Jørgensen on September 23rd, 2017