THE SHOW: The X-Files

THE PAIRING: Scully and Mulder

THE ROMANTIC MOMENT: Mulder learns the truth about Scully’s disappearance back in season two while Scully works on a cure to save Mulder.

The long anticipated return of The X-Files came with many ups and a few downs. Namely, the unnecessary break up of Scully and Mulder being the ultimate down. Still, the kindred spirit love between Scully and Mulder shined through as they once again found themselves working side by side unraveling the mystery of the supernatural.

#1 Scully and Mulder doing some old-fashioned investigating together in the best episode of the season, “Mulder and Scully Meet the Were-Monster.” 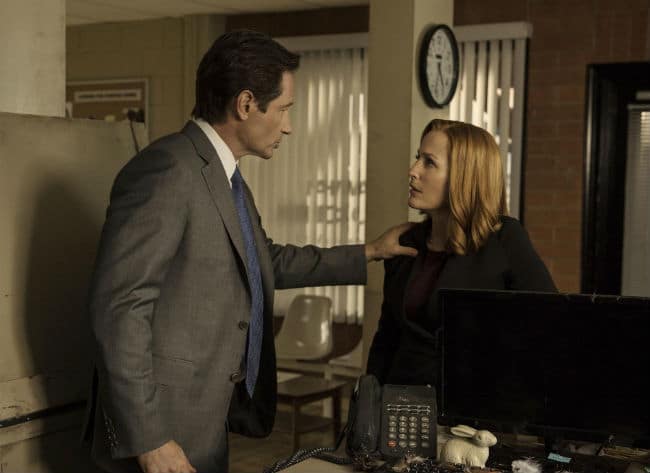 #2 Mulder comforting Scully while her Mom dies in “Home Again.” Scully also remembers Mulder crying over her while she was in a coma many years earlier which was actually a clue to the events of the finale. 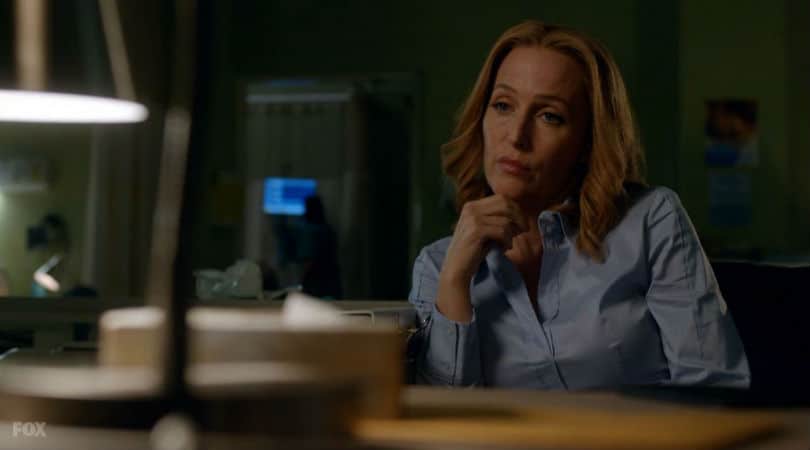 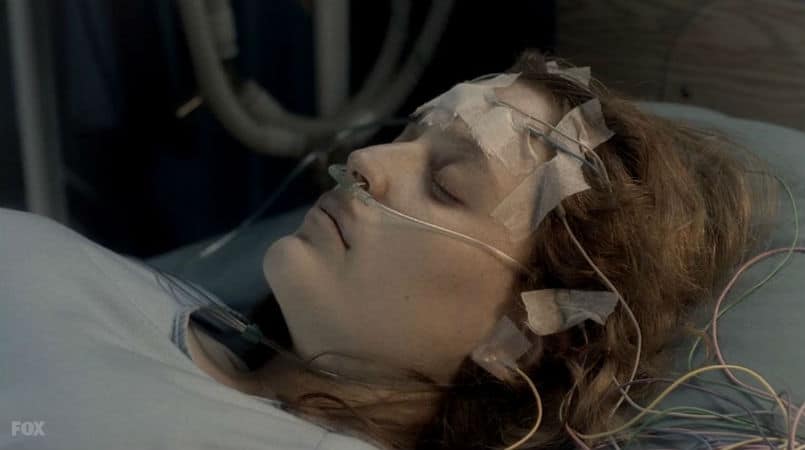 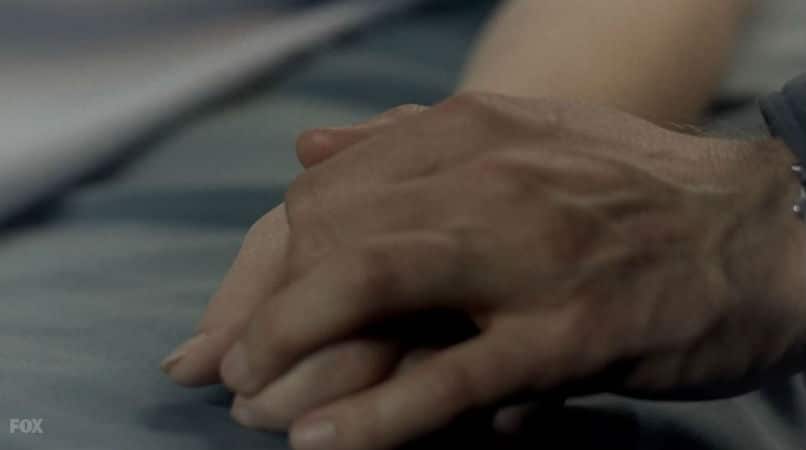 Plus, there were some epic looks in this episode when Mulder first shows up at the hospital and Scully sees him.

After Scully’s Mom dies, Mulder hugs her in one of their best moments. 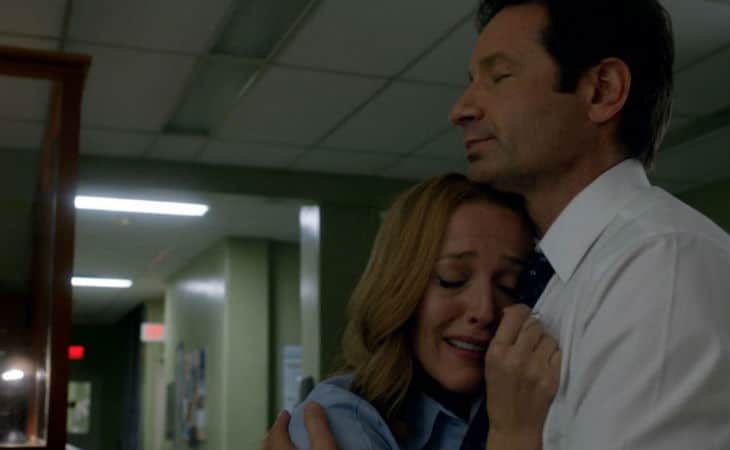 #3 An open conversation between the two as they sit on a log and discuss their son, William. 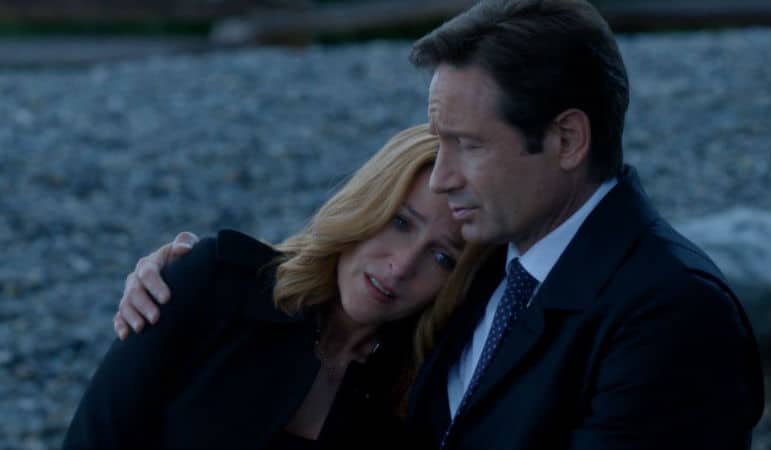 #4 The talk about faith as they hold hands (and look like they’re going to kiss) at the end of episode five, “Babylon.” 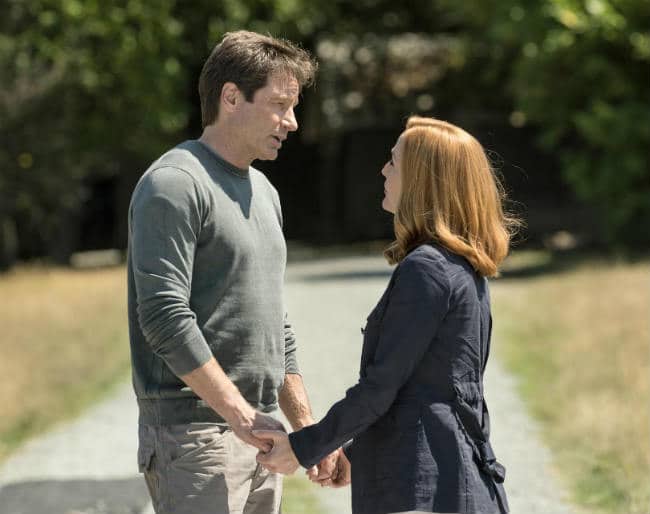 However, my favorite romantic moment of the season happened this week during the finale in “My Struggle II” when Scully once again (in classic form) tries to save Mulder as he uncovers the truth behind a series long mystery.

This season of The X-Files, we learn many of the secrets of the ultimate conspiracy. It’s not aliens invading the world, but rather a group of power-hungry men (The Syndicate) intent on using alien technology to take over the world through depopulation. At the head of it all? Mulder’s “father,” the Cigarette Smoking Man.

Apparently, all of humanity is being killed by sicknesses and plagues because these “men” have released chemtrails into the Earth’s atmosphere, which cause everyone’s immune systems to collapse. The American people had already been infected by the so-called Spartan Virus due to mandatory flu shots which work as the trigger. That is, except people who were abducted and given the antidote. Or anyone involved in the conspiracy (including Agent Reyes in a shocking twist).

In a surprising revelation, the Cigarette Smoking Man admits that Scully was already saved and given the antidote when she was abducted. But why did he save Scully?

If you recall, the Cigarette Smoking Man was in love with Mulder’s mother with an almost Byronic focus. Did the Cigarette Smoking Man save Scully in a dark, twisted way because he felt Mulder loved her like he loved Mulder’s mother? He downplays love in this scene, but if you recall from earlier seasons he was definitely in love with her. He even has her healed in season 4 in the name of the “cause.” Right…

The best part of this scene is when he calls Scully, Mulder’s “beloved.” It seems likely that this was why he saved Scully. Literally, for Mulder. His whole game is to get his son to join him. And he knows how much Mulder loves Scully. So for anyone hoping that their breakup would mean the end of their “love story,” sorry…

THE ROMANTIC MOMENT: THE X-FILES – SCULLY AND MULDER

With Mulder and the rest of humanity running out of time, Scully and Agent Einstein work to find a cure. Ultimately, Scully discovers that the cure is in her own blood. It’s her alien DNA that’s been protecting her and even cured her of cancer. So, she puts together an antidote, but is it too late for Mulder?

Agent Miller rescues Mulder from the Cigarette Smoking Man, with Mulder still refusing to take the cure. He’d still rather die than join such evil. (That’s the Mulder we all love.) 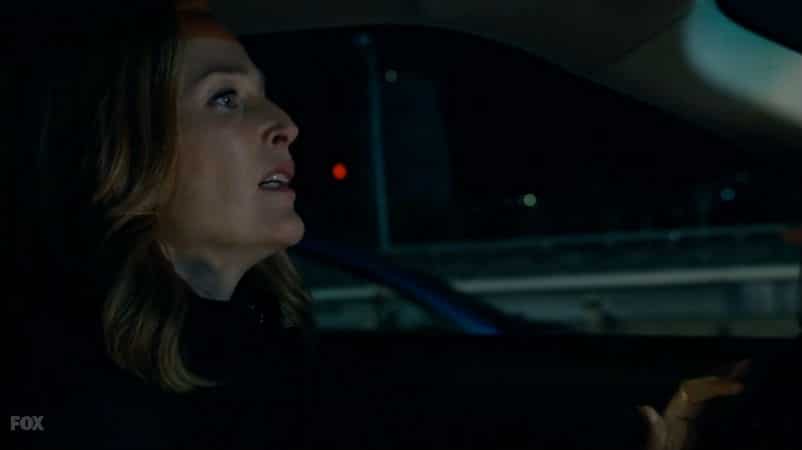 Meanwhile, Scully drives through the city, desperate to reach Mulder in time as Agent Miller drives him toward her. But, it’s the end of the world basically and there is too much traffic, chaos and fear. Scully goes as far as she can in her car but then leaves to run toward him with Agent Miller outside and signaling her. 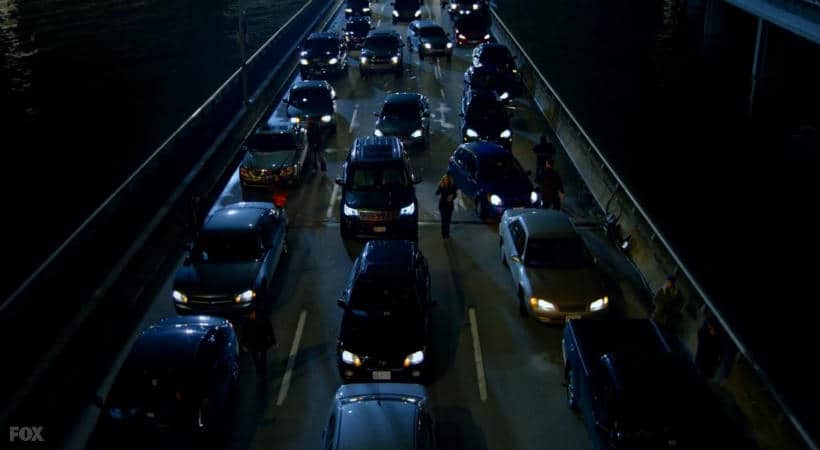 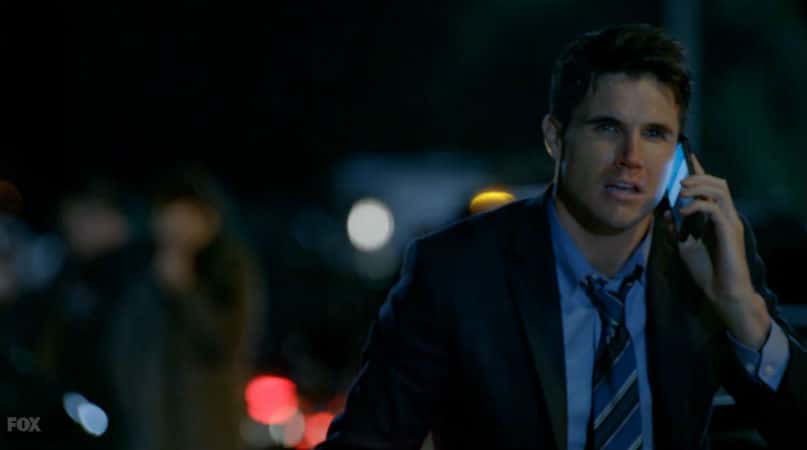 Mulder sits in the front seat, dying as Scully urgently tries to reach him before he dies. 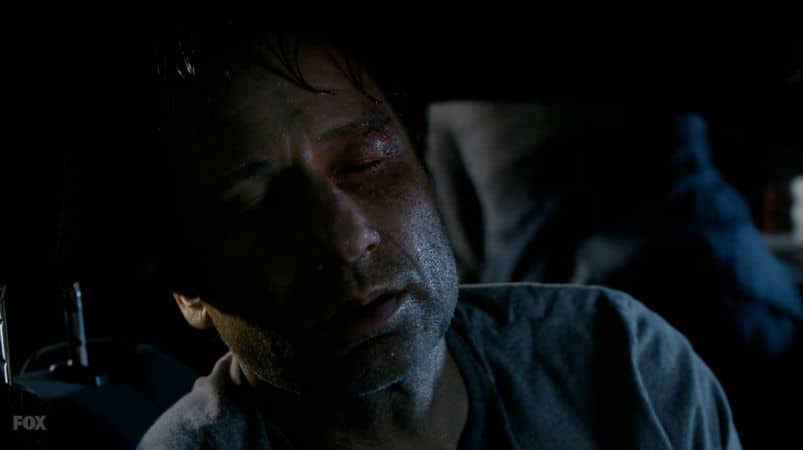 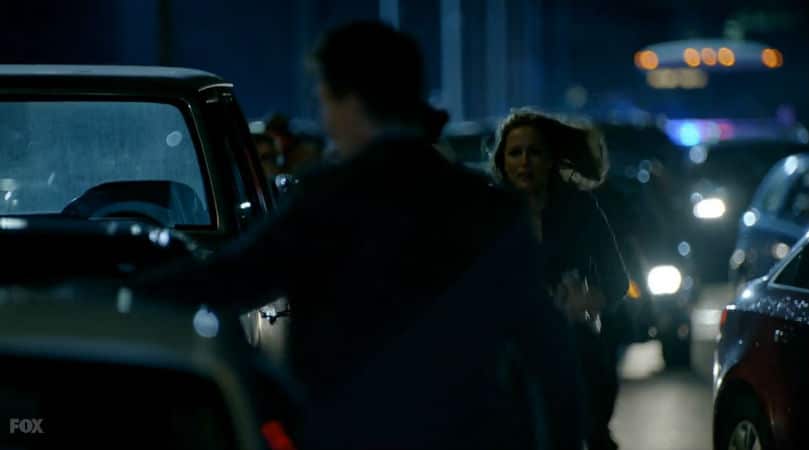 “Where is he?” Scully asks, frantic to save Mulder. Agent Miller directs her to the car, where she finds Mulder alive. But only barely. 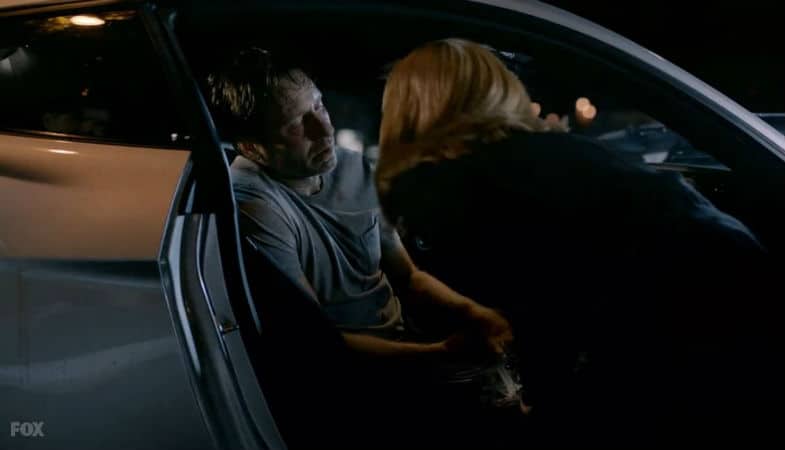 “Mulder, I’m here,” Scully tells him with a smile (once again, bringing us back to this phrase). Even dying, Mulder is happy to see her.

“He saved your life. Old Smokey,” Mulder admits. “I suppose I should thank him.” 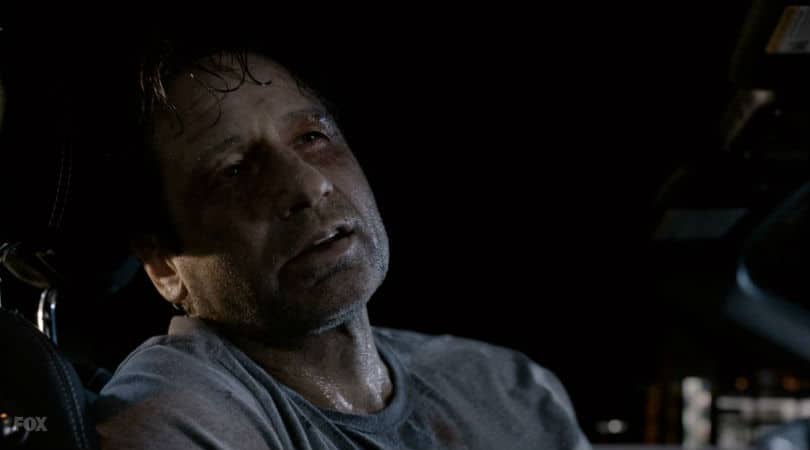 “We’re gonna save your life,” Scully says with determination. 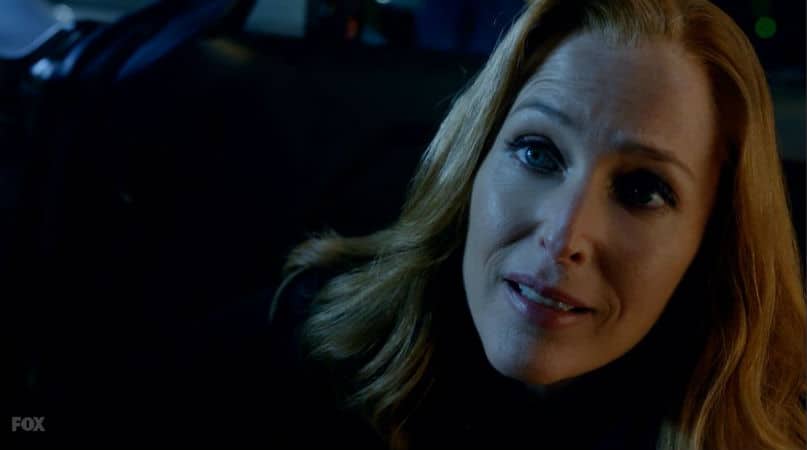 “Agent Miller is also in trouble,” Mulder reminds her.

“I’ll take care of Agent Miller. But right now we’re going to get an IV into you. Okay?”

She steps away and pulls Agent Miller aside. “He is worse off than I thought.”

“Can you do anything for him?”

“What I can do might not help. He needs stem cells in him right now,” Scully says as she begins to put the puzzle pieces together in her mind.” 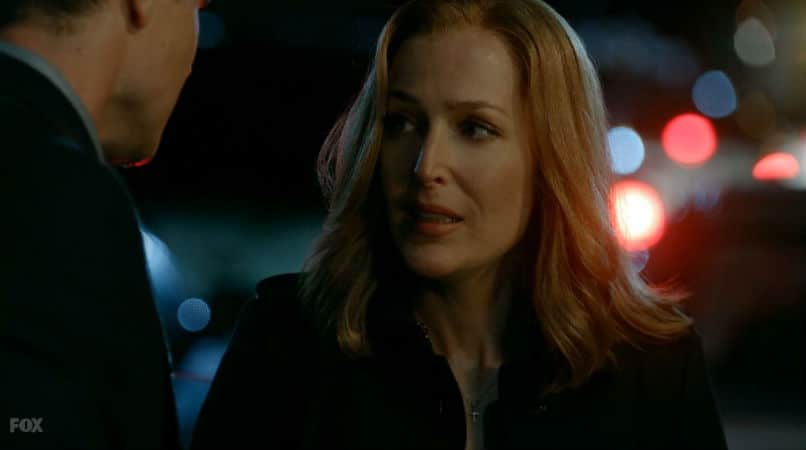 “Stem cells from who?” Miller asks.

Scully then reveals that she needs stem cells from her and Mulder’s son together, William. But she doesn’t know where he is. Just then, a light shines on them. 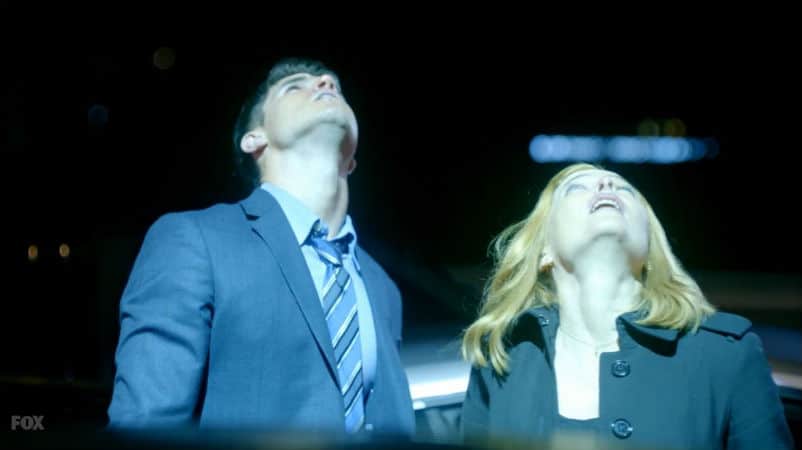 An alien ship is above them. Scully and Mulder look up into the sky. 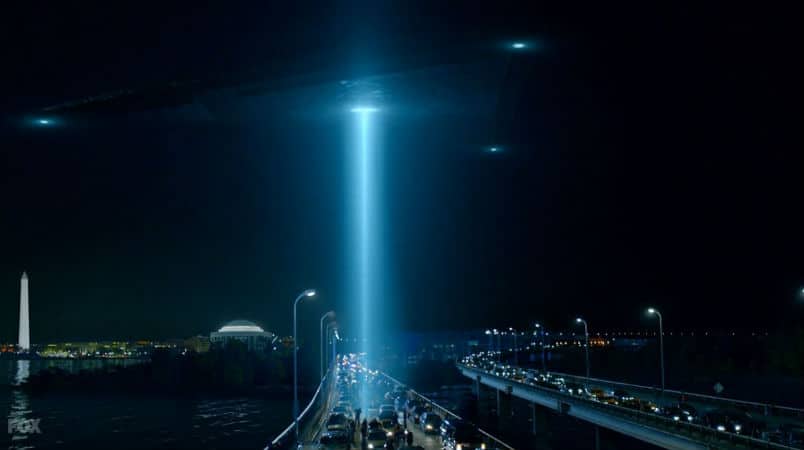 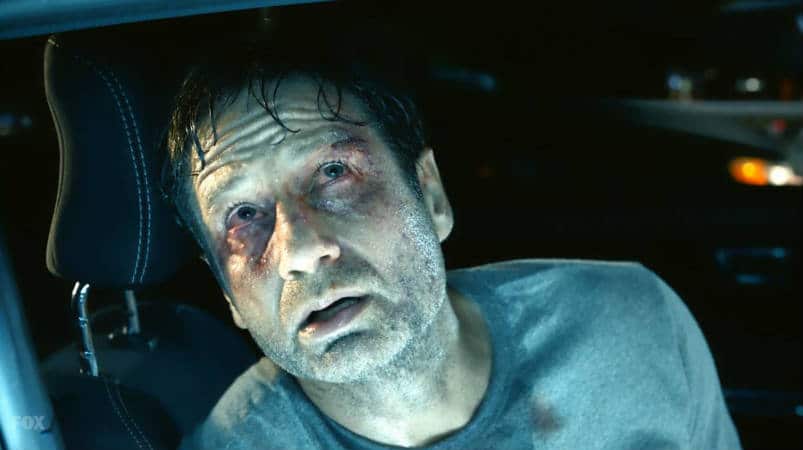 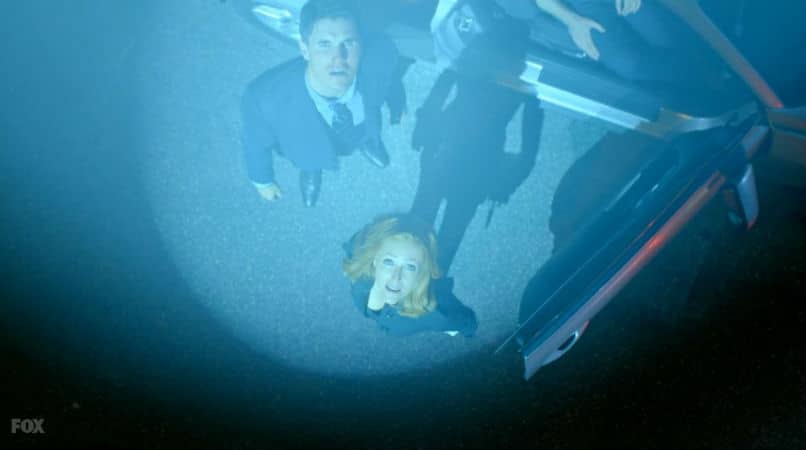 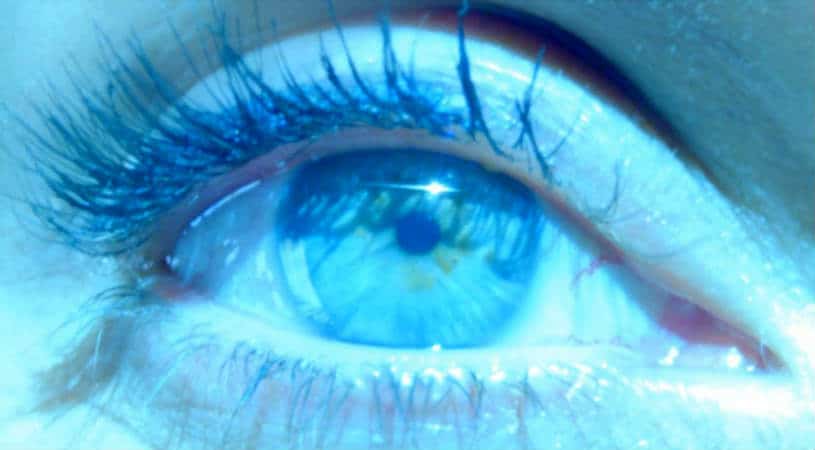 No doubt, at this point we’ll be getting a season 11. So, will Scully be able to find William to save Mulder? Will they be abducted by the Syndicate? We will have to wait and see.

Till then, it’s nice to see Scully and Mulder fighting for each other and proving they still love each other. Not to mention, the romantic mystery now solved. “Old Smokey” abducted Scully to ultimately save her for his son – who he loves in a twisted way. While the finale was all about conspiracies and tragedy, ultimately it was about the love between Scully and Mulder. Not only does their love always save each other, but perhaps their love will ultimately save the entire world as well. You can’t get more romantic than that.

What did you think of the 10th season of The X-Files? Did you love the scenes between Scully and Mulder? Were you surprised by the Cigarette Smoking Man’s revelations? Let me know in the comments!

Our romance-themed entertainment site is on a mission to help you find the best period dramas, romance movies, TV shows, and books. Other topics include Jane Austen, Classic Hollywood, TV Couples, Fairy Tales, Romantic Living, Romanticism, and more. We’re damsels not in distress fighting for the all-new optimistic Romantic Revolution. Join us and subscribe. For more information, see our About, Old-Fashioned Romance 101, Modern Romanticism 101, and Romantic Living 101.
Pin this article to read later! And make sure to follow us on Pinterest.
By Amber Topping on February 27th, 2016