THE PAIRING: Jesse and Becky

THE ROMANTIC MOMENT: After 25 years of marriage, Jesse and Becky renew their wedding vows.

Yes, Fuller House is just as big of a cheese fest as Full House was, but that’s part of the charm! The nostalgic gooeyness of seeing Jesse and Becky renew their vows after 25 years of wedded bliss in the season finale just put a smile on my face. The episode, “Love in the Air,” gave us comedy (Jesse and Becky had to share their moment with Kimmy Gibbler), romance (the episode also focused on the triangle between DJ, Steve, and Matt), and several sweet moments between one of the best TV couples out there. I mean, I’ve been rooting for Jesse and Becky since I was a little girl…

Jesse and Becky: The Lead In

Throughout the season, Uncle Jesse and Becky dropped by every now and then to remind us just how much we still love them (I have to admit that both still look AMAZING too). In the season premiere, we had an adorable moment when Uncle Jesse sings “Forever,” their wedding song to Becky.

Then, in another episode, Uncle Jesse adorably ends up in the doghouse after accidentally insulting Becky’s cooking on a voicemail. Later, Jesse proved the romance was still alive when he sent Becky a whole room full of flowers!

And finally, in the season finale, the two of them come together again to renew their love in a weekend planned by party planner Kimmy Gibbler! Jesse wanted “a whole lot of style and very little Gibbler.” But in Full/Fuller House style, he got a whole lot of Gibbler as she decides to piggyback on their wedding renewal to remarry her ex-husband Fernando.

Soon, Jesse’s romantic plans kind of get put on the backburner for Kimmy. Even his adorable reminiscing of their first date with double cheeseburgers gets sidelined for a bachelorette party… 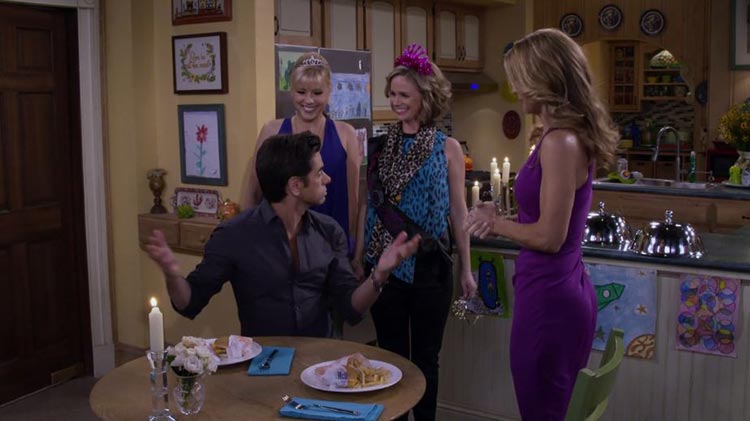 Poor Uncle Jesse! (He really IS everybody’s Uncle…) At least, Jesse and Becky got to tell each other how still in love they are with each other first!

The Romantic Moment: Jesse and Becky 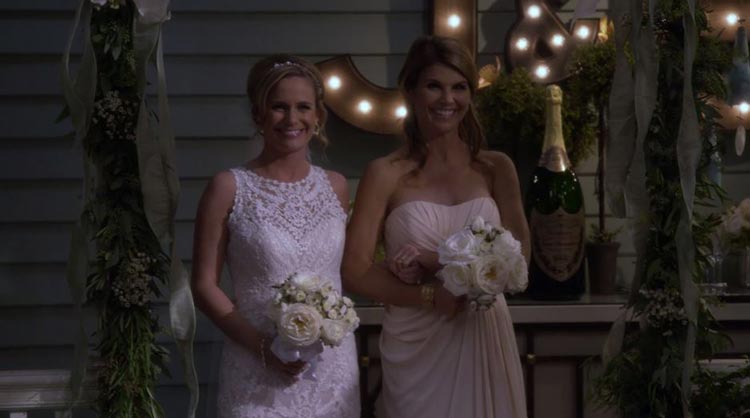 Finally, it comes time to renew the wedding vows, Becky looking just as beautiful as the first time they gave each other vows. Becky and Kimmy walk down the aisle, Jesse smiling with even more love than he did 25 years ago. 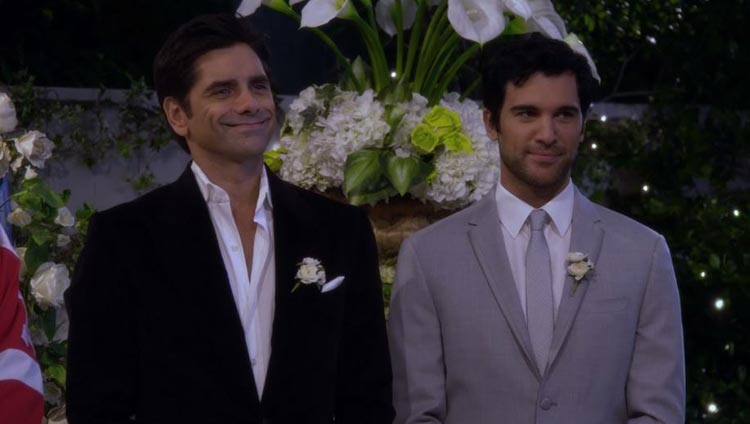 In the background, Stephanie sings a song she wrote for both couples (though clearly it was meant for Jesse and Becky) because what is a Full House wedding without an original song? 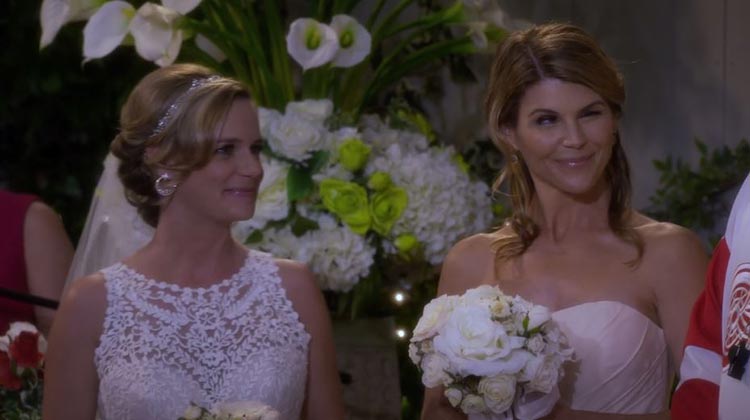 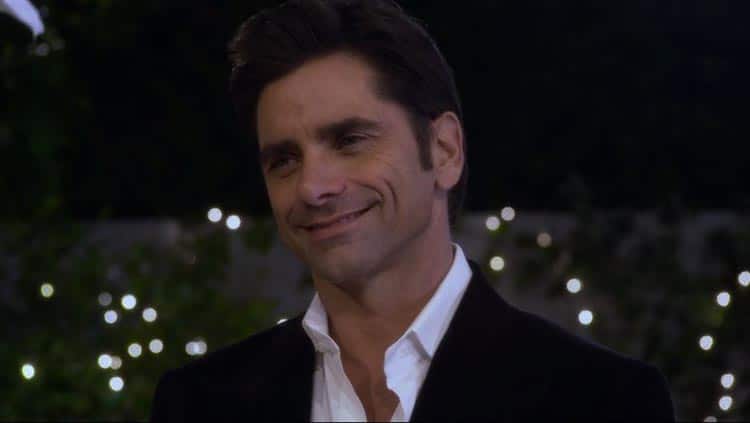 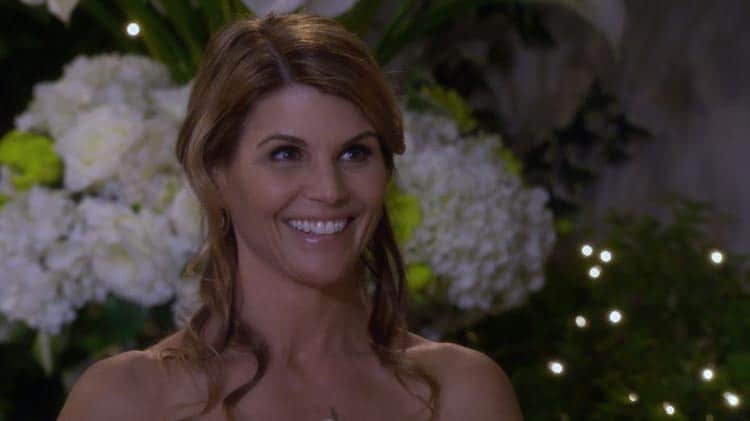 Becky gives Jesse a wink, the two smile, and then it is time to renew their vows with Joey as the minister of hockey! 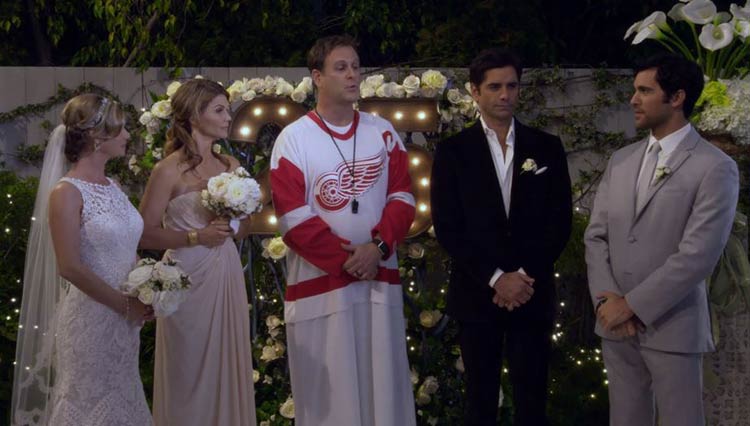 He tells couple number one to recite their vows. 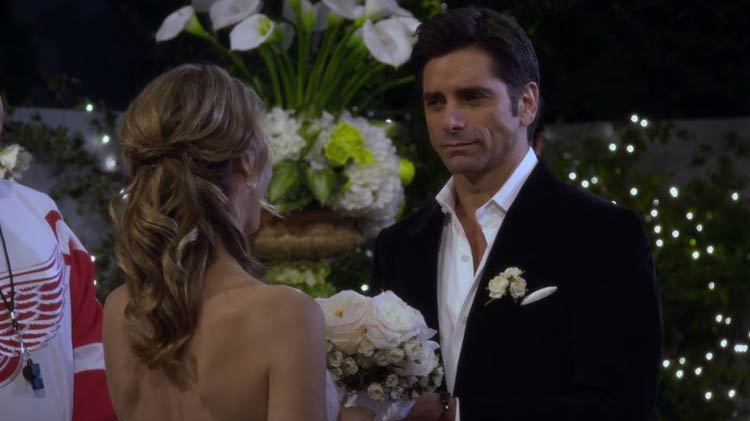 Jesse says his vows: “Becky. You’re everything I ever dreamed of and more than I deserve. I love you now and I love you forever.” 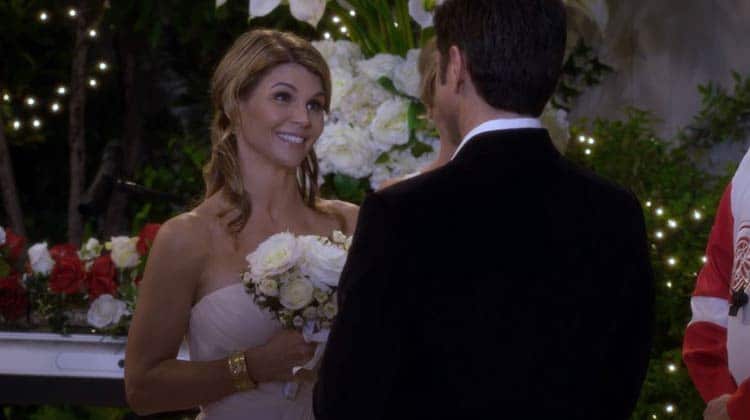 Becky, with a smile, then says her own vows: “Jesse I am the luckiest woman on earth. I love spending every day with you. I love laughing with you. I love loving you. Thank you for the most incredible 25 years of my life. They lean in for a kiss but are sadly interrupted by Joey’s whistle… 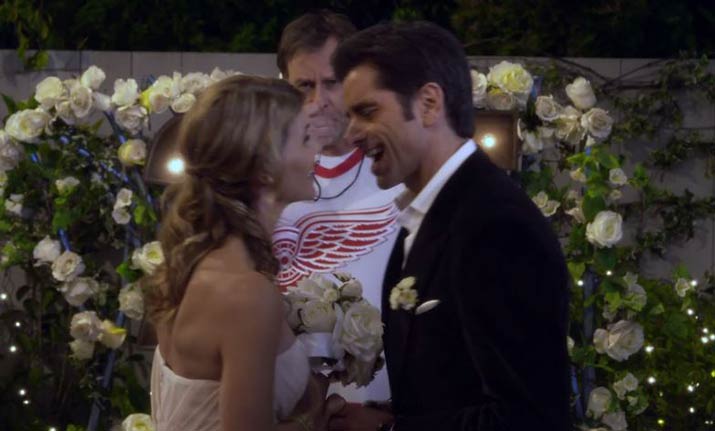 They then get hilariously interrupted over and over again with Kimmy’s doubts. She doesn’t want to get married to Fernando after all. Still, Jesse and Becky do at least get the time to say I Do’s again. When Kimmy finally makes her decision to just stay engaged to Fernando, it’s time for Becky and Jesse to kiss when… 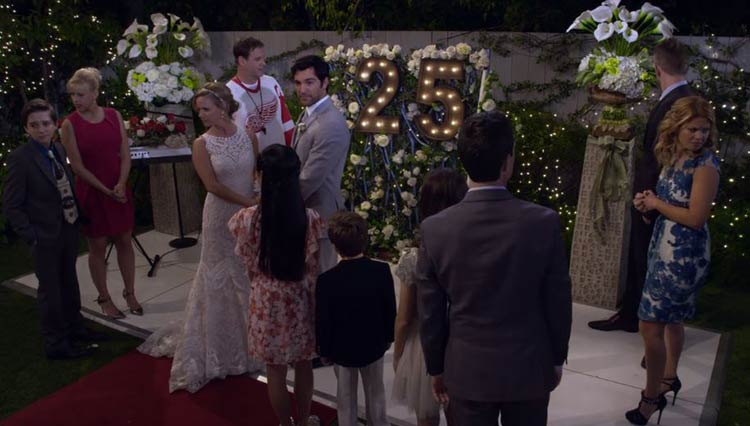 They had disappeared from the proceedings. In pure Jesse fashion, he wanted to take off before Kimmy stuck him with the bill! As romantic as their vows were, it had to end in the old-fashioned Full House humor with hopefully the promise that we haven’t seen the last of Uncle Jesse and Becky just yet. Thankfully, Fuller House has already been renewed for a season 2!

Did everyone else love the vows between Jesse and Becky? And on a side note, is anyone else also enjoying the DJ, Steve, Matt triangle? I totally am, but I’m definitely Team Steve! I guess we will have to wait until next season to see what happens next!

Our romance-themed entertainment site is on a mission to help you find the best period dramas, romance movies, TV shows, and books. Other topics include Jane Austen, Classic Hollywood, TV Couples, Fairy Tales, Romantic Living, Romanticism, and more. We’re damsels not in distress fighting for the all-new optimistic Romantic Revolution. Join us and subscribe. For more information, see our About, Old-Fashioned Romance 101, Modern Romanticism 101, and Romantic Living 101.
Pin this article to read later! And make sure to follow us on Pinterest.
By Autumn Topping on March 12th, 2016