THE MOMENT: Carson loosens up as he holds Mrs. Hughes’ hand along the shore.

For anyone who loves The Remains of the Day, I’m sure it has always been simple to imagine some kind of secret something going on between Downton Abbey’s Mrs. Hughes and head butler Mr. Carson. Similar to James Stevens of the former, Mr. Carson is completely devoted to his work, so much so that it comes first before everything else. He can be snobbish, prideful, stubborn, but also a man of honor with a great big heart (such as his adoration for Mary) that is capable of feeling great love (just consider the past love he had lost). Compare these traits to head housekeeper Mrs. Hughes: strict, compassionate, intelligent, who also has a heart of gold. She’s always willing to help someone in need without question.

Plus, let’s face it: without Mrs. Elsie Hughes, Carson wouldn’t have made it very far. She is a good influence, calming his absurd moods and unforgiving nature. Together, outside of running a tight ship at Downton, they would make a good team. I mean, who says you can’t find love later on in life? That being said, I was beginning to wonder if there would ever be anything between the two at all, other than a few hints here and there…Then suddenly it happened. In the season finale, Mrs. Hughes and Carson finally shared an adorably awesome romantic moment which is why as soon as I saw it, I knew nothing else this week could even compare.

Throughout the final episode of the season, Carson was trying to plan a day off for all of the workers at Downton. Unfortunately, his ‘ideas’ were boring and quite frankly, no one really wanted to go to one of his buttoned up museums. Nevertheless, Mrs. Hughes being Mrs. Hughes and the clever, manipulative woman that she is (like pinning up a picture of a group of people at the sea) contrived the situation so that Carson finally comes up with an idea to “settle” for a day at the seaside (well at least he ‘thinks’ it is his own idea). While Carson finds the choice to be a “defeat,” he still asks for her opinion. She says smartly, “Well, thank heaven you got there at the end,” quite happy with the way things turn out. Just look at her gloating smile: 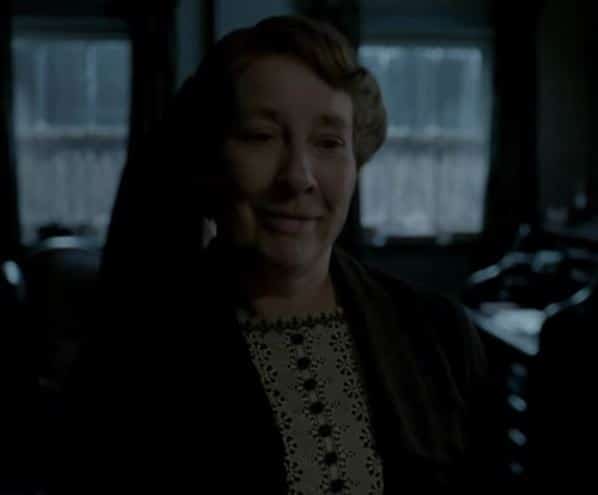 Most importantly, however, this decision opens up all sorts of possibilities for the two, especially because Carson finally gets to loosen up, well as much as he possibly can anyway. Once at the sea, Carson sticks his feet in the cold water with a gasp. Mrs. Hughes looks back at Carson: “Suppose a bomb goes off. Suppose we’re hit by a falling star. You can hold my hand. Then, we’ll both go in together.”

Mr. Carson agrees to this, adorably and stiffly adding, “I think I will hold your hand if it will make me feel a bit steadier.” Mrs. Hughes has the perfect comeback: “You can always hold my hand if you need to feel steady.” Shocked, Mr. Carson quips back: “I don’t know how, but you managed to make that sound a little risqué.” Mrs. Hughes just laughs, and says, “And if I did,” all in the midst of taking his hand: 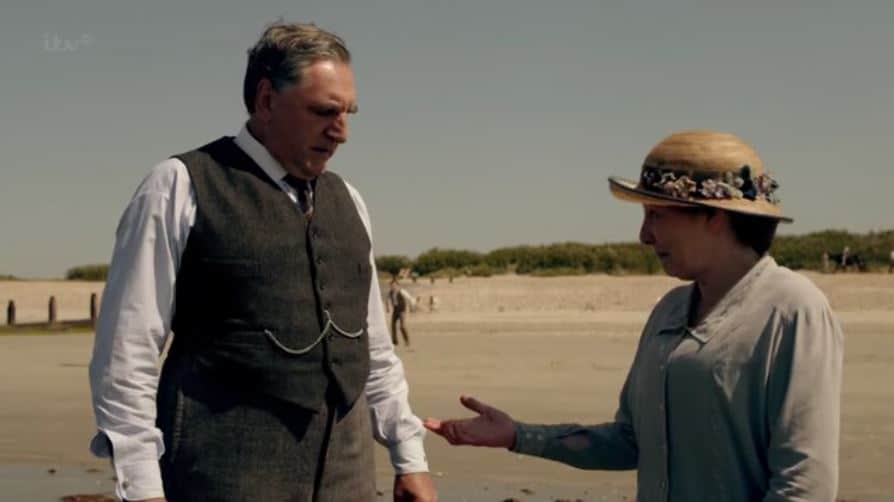 With his hand in hers, she says “We’re getting on Mr. Carson, you and I. We can afford to live a little.” Hopefully, he takes her advice. But for now, we have the possibility, Mr. Carson and Mrs. Hughes walking hand in hand into the sea. 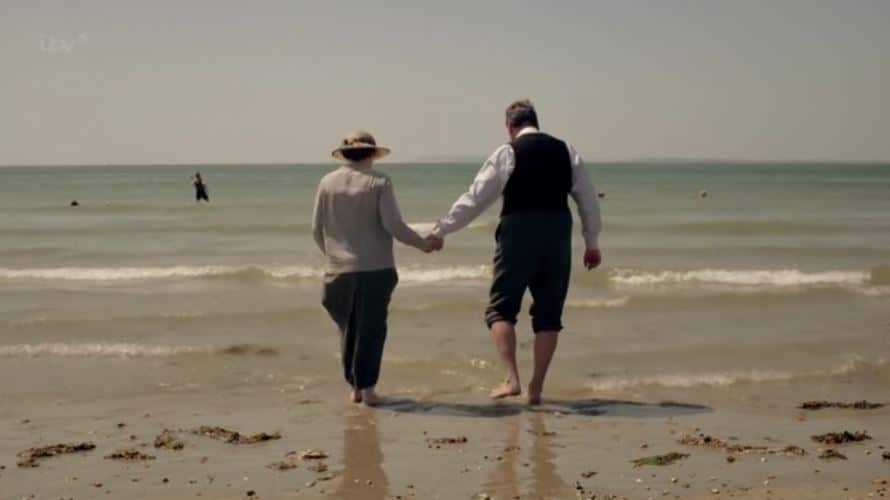 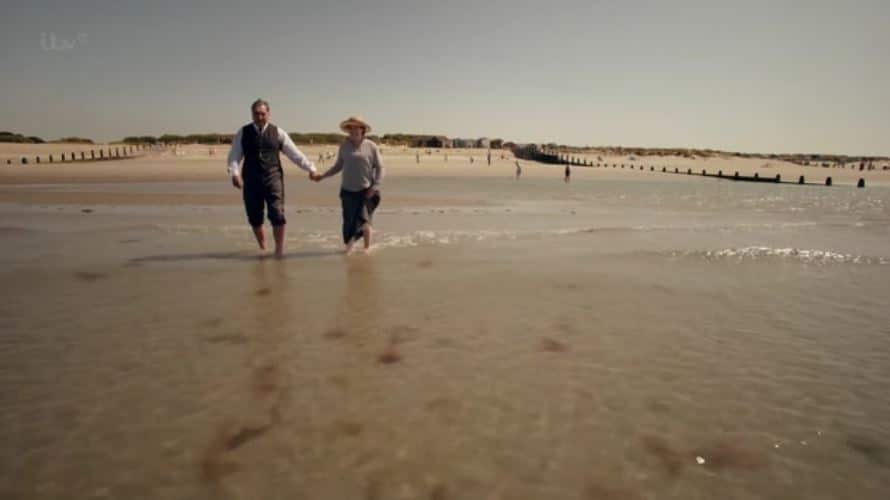 A perfect way to close out the season.

Anyone else adore this scene? Looking forward to more Mr. Carson and Mrs. Hughes romantic moments next season?  Let me know in the comments…

Check out our Archive of our other Romantic Moments HERE

Love Period Drama? Check out my Reviews of these must see shows: Miss Fisher’s Murder Mysteries and The Paradise

Our romance-themed entertainment site is on a mission to help you find the best period dramas, romance movies, TV shows, and books. Other topics include Jane Austen, Classic Hollywood, TV Couples, Fairy Tales, Romantic Living, Romanticism, and more. We’re damsels not in distress fighting for the all-new optimistic Romantic Revolution. Join us and subscribe. For more information, see our About, Old-Fashioned Romance 101, Modern Romanticism 101, and Romantic Living 101.
Pin this article to read later! And make sure to follow us on Pinterest.
By Autumn Topping on March 1st, 2014