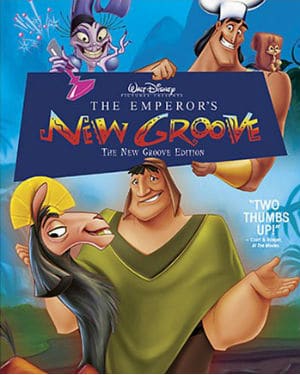 Welcome to Revisiting Disney! This week, we’re looking at that Disney movie that makes me laugh every single time, The Emperor’s New Groove! Like always, I have labeled each category so if you want to skip to the parts that interest you most, feel free. And, of course, if you have any thoughts, burning or otherwise, please share in the comments!

BACKGROUND OF THE EMPEROR’S NEW GROOVE

Opening on December 15th, 2000, The Emperor’s New Groove was, I think, a bit of a surprise to many people.  This is not the story that we typically think of when we think Disney; there are no princesses, the story is sarcastic, and the film breaks the fourth wall quite a bit. Despite that, I feel like it’s a film that most people enjoy, at least a little bit. It also features the first Disney character to be pregnant during the film, Pacha’s wife Chicha.

The Emperor’s New Groove is interesting in that there are really no songs in the film at all. The opening number, its reprise, and the song “My Funny Friend and Me” are really the only ones in the film. Both were written by Sting (composer/lyricist) and Dave Hartly (composer), and while Sting performed the music video for “My Funny Friend,” he doesn’t actually sing in the film.

Another fun fact from the commentary is that Patrick Warburton, the voice of Kronk, composed his own theme song music that he hums during the kidnapping scene. He had to sign the piece over to Disney, just in case, something that he laughed uproariously about.

The rest of the music was by John Debney, and manages to strike just the right balance between epic, moving, and entertaining. He worked on SeaQuest 2032 (and would compose the music for Iron Man 2), and I think this shows that he knows when to use the stirring music and when something else would work. The score also uses pieces of “My Funny Friend,” which is very effective and creates a common theme throughout the film.

The animation in The Emperor’s New Groove is very clever; there are lots of hidden Easter Eggs (for example, when Yzma pours the potion onto the cactus, watch the cactus as the scene goes on) and other clever moments.

The style, backgrounds, and setting of the film were inspired by Inca art, as the animators went on a ten-day research trip, but they were very clear in the audio commentary that the film is a fictional version inspired by the art; if they had wanted to make an accurate film, they would have (I thought that was an interesting thing to have to tell us).

The artists also spent quite a bit of time watching llamas, to make sure that llama-Kuzco was moving correctly. Additionally, the characters all have their own colors. Pacha looks earthier than the bright and flashy Kuzco while Yzma has the purple (which can symbolize royalty and insanity).

Like the Disney movies before it, The Emperor’s New Groove took advantage of the new CGI technology, using a combination of both styles in their film. Some things, like Pacha’s cart are CG, and the team took care to make the pieces that were CGI just as imperfect as a real tool or house would be. It’s a nice touch, and I personally like the CGI work here better than the stuff in Tarzan; it feels more integrated with the rest of the film.

The Emperor’s New Groove is the story about a young emperor, Kuzco, who was very spoiled, rude, selfish, and mean to his staff. Although he was very hip, he was not very popular. After firing his advisor, Yzma, and telling Pacha, the leader of a nearby village, that he was demolishing said village to make room for his summer home (complete with waterslide!), Yzma decides to poison him and take over. Fair enough?

Through the bumbling of her assistant, Kronk, Kuzco is instead turned into a llama and winds up at Pacha’s house. Kuzco is determined to get home and while Pacha is determined to save his home, he’s a nice guy and he can’t let Kuzco just die. They embark on a hilarious road trip, trying to get Kuzco home and de-llamafied while avoiding the plots of Yzma and Kronk. On the trip, Kuzco starts to learn what it means to have a friend, and goes through a change on the inside that’s just as dramatic as his physical transformation.

Originally, Kuzco was going to build his summer home on the mountain next to Pacha’s village at the end. However, Sting was concerned that this ending showed that Kuzco really hadn’t learned anything at all throughout the movie and was still just looking out for number one. The production team thought he had a valid point, and changed the ending to the one we have today.

The Emperor’s New Groove was not, as some believe, based on the fairy tale “The Emperor’s New Clothes,” and is actually closer to a different story, that of “Caliph Stork,” a story of a Caliph in Baghdad who is turned into a stork. It was adapted by German Wilhelm Hauff from an Arabic tale, and can also be found in the “Green Fairy Book” by Andrew Lang. It’s a fun story, and I would encourage you to check it out.

This film, however, was originally going to take a much different tack. Originally, it was going to be a musical called “Kingdom of the Sun,” with Roger Allers (The Lion King, The Little Mermaid, etc) and Mark Dindal (Cats Don’t Dance) as directors. Sting had written six songs, and the story was a retelling of “The Prince and the Pauper” by Mark Twain, with David Spade as Manco and Owen Wilson as Pacha, the two characters who switch places. Yzma finds out and turns Manco into a llama, and the story follows Twain’s fairly well, which would turn into a problem, as the Studio thought it was too similar.

When the film was half done, it wasn’t testing very well, and went into a hiatus. During the hiatus, Allers and Andreas Deja (who had been the supervising animator for Yzma), both left to work on Lilo and Stitch.  Mark Dindal being brought in to add some more comedy to the story created conflict, and he and Allers were basically making two separate films. When the Studio refused to give them six more months to finish the film, Allers left the project and the film was completely retooled.

Instead of an Incan “The Prince and the Pauper,” we get a wacky buddy comedy that follows a spoiled prince’s voyage of self-discovery. I love the original idea, and maybe someday we’ll get to see that footage. However, the film that we got is really fun, and I’m glad we have it.

We have officially entered the new millennium, a time when I personally had a different relationship with the Disney animated films. As the oldest, I still had the advantage of an excuse to watch Disney films; however, I was way too busy to be a regular watcher.

Pop-culture-wise, “Survivor” debuted, and Harry Potter and the Goblet Fire was released, and Gladiator, X-Men, How the Grinch Stole Christmas!, What Women Want, and Erin Brockovich all were popular films.

Microsoft 2000 was released, AOL and Time Warner merged, The London Eye opened, Mars Odyssey launched, and many other technological advances colored the new millennium. Plus, divers discovered the submerged city of Alexandria in Egypt, which is just awesome.

Despite all the positive advances, the new millennium also held its fair share of earthquakes, fires, a plane crash in Paris, and there is an environmental disaster in the Mississippi (300 gallons of black sludge). So, like many other years, it was a mix of good and bad.

I think that the seriousness of what was happening in the world makes a movie like The Emperor’s New Groove much more relatable. People love to laugh when things are tough, and all the breaking-the-fourth-wall jokes and callbacks to classic cinema add to the humor of this film, humor that I would say has aged well.

From The Emperor’s New Groove, I learned that no person is an island. I can be as rich, successful, and famous as I want to be, but unless I also have friends and family who love me, I’m really very poor.

Another lesson is that it’s not about my stuff. I’ll be honest, I like my stuff (especially my books), but I could be happy without them. Just like Kuzco learns that he doesn’t need his ultimate summer getaway (complete with waterslide!), this film reminds me of the importance of family and friends.

Also, always treat others with respect. Kuzco is a jerk, and when he dies, no one is sad. I always found that tragic. Plus, his advisor tries to kill him, and part of me can’t blame her for hating him. If Kuzco had been less of a jerk, things might have been better for him.

Finally, doing the right thing isn’t always easy, but it’s always worth it.

DOES IT HOLD UP?

Honestly, The Emperor’s New Groove is one of my favorite Disney movies, ever. It makes me laugh uproariously every time I watch it. There are so many nods to the audience, clever one-liners, the map scene…and this is all overlaid with the sweetness of the bromance between Pacha and Kuzco, plus the added wonderfulness of Pacha and his family. The animation isn’t Pinocchio; but it’s not trying to be. The wacky and more laid-back style works well for this one. Available on Netflix and only 78 minutes long, it’s well worth the time it’ll take you to watch it.

For next week: Atlantis: The Lost Empire

If you enjoyed this post and the others in the Revisiting Disney series, and have found yourself wishing that you could find them all in one convenient and bound book with eight extra essays, there is an option for you! Check out A Journey Through Disney: My Look Back Through Disney Canon, now available on Amazon as both a Kindle book ($4.99) and a paperback ($11.99).

Our romance-themed entertainment site is on a mission to help you find the best period dramas, romance movies, TV shows, and books. Other topics include Jane Austen, Classic Hollywood, TV Couples, Fairy Tales, Romantic Living, Romanticism, and more. We’re damsels not in distress fighting for the all-new optimistic Romantic Revolution. Join us and subscribe. For more information, see our About, Old-Fashioned Romance 101, Modern Romanticism 101, and Romantic Living 101.
Pin this article to read later! And make sure to follow us on Pinterest.
By Bailey Cavender on May 1st, 2016