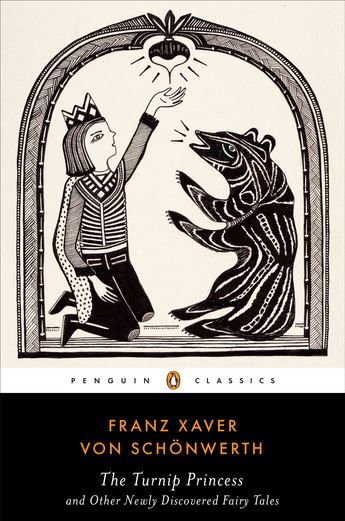 In 2009, a fairy tale expert called Erika Eichenseer made an exciting discovery. After years of searching, she found about five hundred tales from the collection of 19th-century German folklorist Franz Xaver von Schonwerth (O in surname needs umlaut) in the municipal archive of the city of Regensburg. No one had read them for years and years. The story hit headlines around the world. Now about seventy of the tales have been translated into English by academic Maria Tatar and published as The Turnip Princess.

The fairy tales all come from the Upper Palatinate, the eastern part of Bavaria. They were collected by Schonwerth from oral storytellers around the region, many of whom told tales in their local dialect, which Schonwerth carefully preserved. He didn’t attempt to edit or adapt the tales, just record them. Had he lived 50 or 100 years later, he would probably have made audio recordings which – ironically – would now be harder to access.

The fairy tales in the book are organised into six categories: Tales of Magic and Romance, Enchanted Animals, Otherworldly Creatures, Legends, Tall Tales and Anecdotes, and Tales About Nature. There are brief notes on each tale in the back of the book and – for the really keen – sources and Aarne-Thompson types for all the tales.(See http://www.frankelassociates.com/calithwain/Aarne-Thompson.htm).

Some of the stories are versions of well-known tales (Cinderella, The Musicians of Bremen, and The Pied Piper of Hamelin, for example). Others are gender-reversed versions of those tales. We meet a king called Goldenlocks, several frog and toad brides, and a Cinderfella who is identified by the king as being the true owner of a red boot – and consequently thrown in jail! Yet other tales are quite unique, unlike any I have read before. Many have happy endings, but some don’t. And in some of the tales, good does not triumph over evil, and characters (literally) get away with murder.

When I first heard about the Schonwerth collection, I was very excited and couldn’t wait for the English translation to come out. Hearing that the tales were still “in the rough,” I half-expected them to be confusing jumbles, difficult to read or understand. That is not the case. They are extremely easy to read and make perfect sense.

But the oral tradition does show through in a number of ways.  For one thing, the earthier elements of fireside storytelling have not been removed. In “Hans the Strong Man,” the hero grinds his adversary’s buttocks down with a millstone.  (Reminds me of a scene in Spongebob Squarepants!)  For another thing, the plots often take weird twists and turns with no real explanation for why something happened, or how a person or object suddenly came to be in that place.

Why does a weasel crawl out from a crevice and lick the eyes of the Titans in “The Sun’s Shadow”?  We don’t know.  Some of the tales appear to end abruptly, or have one  episode more than they really need. We get the impression of nightly storytelling sessions, in which tales can continue from one night to another in serial form, turning in whichever way takes the teller’s fancy. The same tale might be told several times, but not necessarily have the same ending each time. A different occasion might call for a different outcome.

Everyone will have their own favourites in this collection, but here are some of mine:

Only child Marie complains of having no brothers or sisters, so little elves come up through the floorboards to be her brothers and sisters, and teach her to read, write, and knit. In the end, the fortunes of the entire family depend on the little elves, and Marie never forgets to reward them.

There is a tale similar to this in East of the Sun and West of the Moon, but I like this one better. A mistreated girl gains the Virgin Mary for a godmother. Her curiosity leads to her being expelled from the Virgin’s palace, but when she gets home, she finds that she can weep pearls and laugh roses. When she wishes to escape marriage, she is brought back to the palace, where she takes the Virgin’s place as protector of the poor.

A man promises his sister in marriage to a crow, in return for the creature’s waking him from a sleep so long his beard had grown several feet while he slept. The curiosity of her other two sisters prevents the spell on the crow being broken immediately, but the crow gives his faithful beloved an enchanted feather from his wing which, when used as a quill, will cause any wish written with it to come true. The girl uses the quill’s magic to repel the advances of other men, and the crow is finally able to transform into a prince.

Where to start? Since these tales haven’t been heard since the nineteenth century, there is scope for adaptations galore – novels, films, artwork, music…etc. And with such great variety, there is room for a whole variety of styles and tones. “Nine Bags of Gold” would make a beautiful children’s book. I can almost see the illustrations! “The Singing Tree,” however, is closer in tone to Pan’s Labyrinth. And I certainly wouldn’t want to turn “Oferla” into a children’s book!

Our romance-themed entertainment site is on a mission to help you find the best period dramas, romance movies, TV shows, and books. Other topics include Jane Austen, Classic Hollywood, TV Couples, Fairy Tales, Romantic Living, Romanticism, and more. We’re damsels not in distress fighting for the all-new optimistic Romantic Revolution. Join us and subscribe. For more information, see our About, Old-Fashioned Romance 101, Modern Romanticism 101, and Romantic Living 101.
Pin this article to read later! And make sure to follow us on Pinterest.
By Elizabeth Hopkinson on May 22nd, 2015