Three years after Queen In-Hyun’s Man aired, it still hasn’t lost its beauty and fun. At that time in 2012, “time travel” stories were extremely popular in Korea with at least five different time traveling K-Dramas airing on three channels. I watched four of them and Queen In-Hyun’s Man has to be the stand-out drama amongst them with a solid story, good pacing and the sweetest emotional romance.

The story follows Kim Boong-Do, a young nobleman in the 17th century who trained himself to be a warrior to protect the deposed Queen In-Hyun and enact vengeance on the malicious political giants who had his family executed. When a childhood friend gives Boong-Do a protection charm to keep him safe, he thinks nothing of it – until he’s nearly killed and is magically transported to three hundred in the future. Choi Hee-Jin is just a struggling actress trying to find her big break when she lands the role of the famed, tragic Queen In-Hyun. But she keeps running into this crazy, fascinating guy who speaks in formal Korean and wears historical clothes. A relationship starts to blossom but can it develop fully when Boong-Do is juggling a life in two different worlds?

What I love so much about this show is the amazing blending of two different worlds and storylines. Kim Boong-Do’s story of court intrigue and stopping assassination attempts against Queen In-Hyun could easily stand alone as its own drama. All of the characters in the past – from Boong-Do’s family maid and childhood friend, Yeon-Wol, to the villainous political schemer Min Am – are intriguing and well-acted. There’s a heavy feeling of darkness and danger lurking in every corner with assassins, accusations of treason, and sword fights. On the flip-side, Choi Hee-Jin’s story is light-hearted and amusing as she joins a historical drama and deals with a rival female co-star and her ex-boyfriend actor who now plays her love interest. Her ex, Han Dong-Min, is hilarious and infuriating as an incurable flirt who wants to rekindle their romance, which adds a lot of funny moments.

I’ve always loved a good (especially humorous!) fish out of water story. Thankfully, Queen In-Hyun’s Man didn’t waste the laughter that came with Boong-Do traveling to the modern world. So many golden moments from his confusion over modern Korean sayings to how seat belts work! (I mean, what would you think if you saw a seat belt for the first time in your life?) Choi Hee-Jin has a lot of fun teasing Boong-Do with delightful results. One of the best moments was her teaching him how “modern” people say goodbye (I’ll give you a hint: there may have been a kiss)! 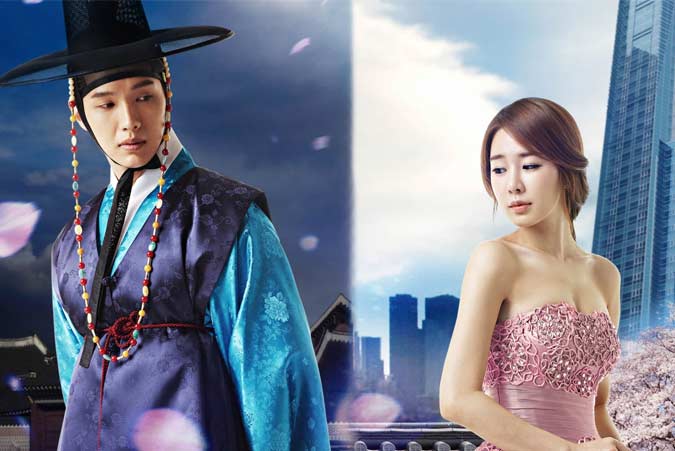 The chemistry between the leads, Boong-Do and Hee-Jin, was sparking and palpable from the moment they met to the last scene. Their romance felt substantial and fleshed-out, working itself from a cute attraction to a deep love that bound them together despite the increasing obstacles trying to separate them. I felt they wanted to be together and believed in Boong-Do’s willingness to do anything to be with her.

This show has such a great hero in Boong-Do who is lovable, intelligent, with awesome sword-wielding skills and a smile that melts any heart. While many heroes’ seeking revenge give into their angsty, brooding side, Boong-Do’s character shines with his playful and kind nature. He’s in every way deserving of the heroine and a wonderful happy ending (if he gets it, that is). Choi Hee-Jin is completely adorable as the leading lady. I’ve seen the actress, Yoo In-Na, play the bratty second lead roles in other dramas, but I feel like she really shines here as the sweet, bubbly and even mischievous heroine. Hee-Jin feels like a “normal girl”, like any of us, who’s just trying to land a job, pay her bills and not let all the crazy stuff get to her. And can I say I love how she never backs down to crazy Han Dong-Min? Having a strong heroine doesn’t mean she has to be super-strong or an angry tomboy. Those characters are great, but a sweet and cute girl can be just as determined and strong.

There are so many awesome twists and turns in this drama that refuse to take the “simple” time-travel drama trope and leave it there. Time is twisted around and even “re-written,” protection charms aren’t all they seem to be, and fate itself may be against the two lovers. Queen In-Hyun’s Man leaves us with a romantic dramedy full of life and death stakes, hilarious hijinks, plenty of kisses and characters we won’t soon forget. You can watch this on Hulu Plus and Viki!

Are you interested in seeing Queen In-Hyun’s Man? Or have you already watched this fun K-Drama? Sound off in the comments…

Our romance-themed entertainment site is on a mission to help you find the best period dramas, romance movies, TV shows, and books. Other topics include Jane Austen, Classic Hollywood, TV Couples, Fairy Tales, Romantic Living, Romanticism, and more. We’re damsels not in distress fighting for the all-new optimistic Romantic Revolution. Join us and subscribe. For more information, see our About, Old-Fashioned Romance 101, Modern Romanticism 101, and Romantic Living 101.
Pin this article to read later! And make sure to follow us on Pinterest.
By Faith White on November 19th, 2015