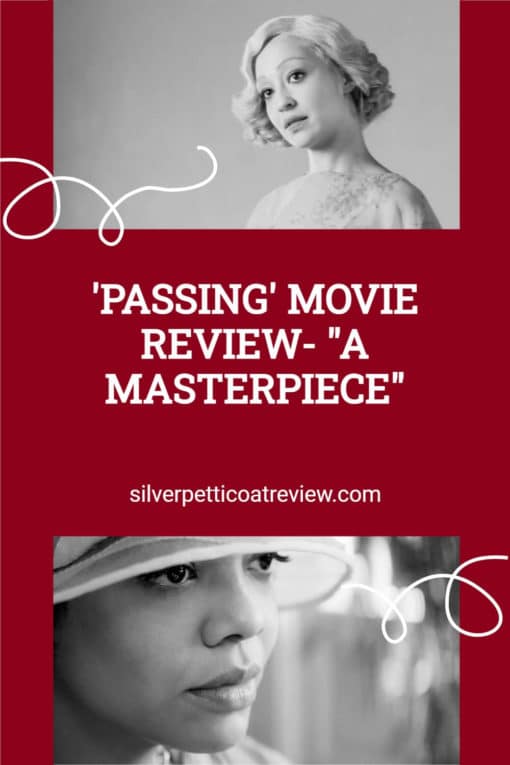 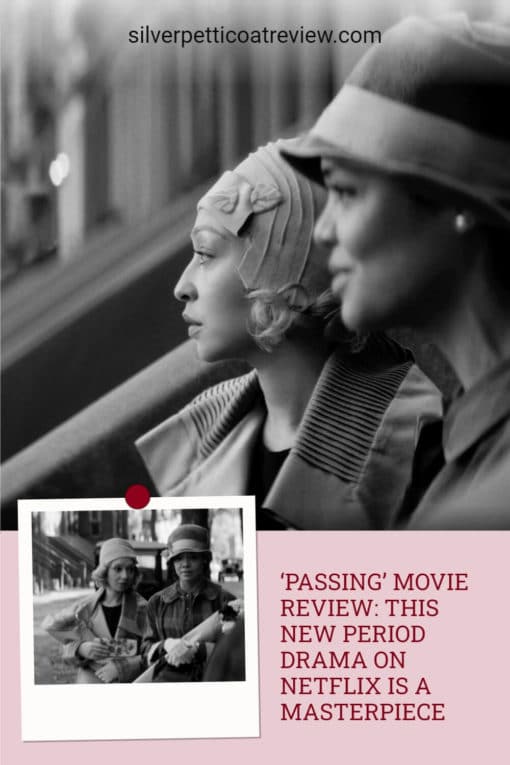 Rebecca Hall’s Passing is a movie that will stay with me for years. It expertly tackles the complex topics of race and identity in an intimate way. The film is based on Nella Larsen’s 1929 book of the same name, the title alluding to African Americans who could “pass” for white because of their light skin.

The period drama centers around two former childhood friends (both biracial) living in entirely different circumstances as adults in the 1920s.

One, Irene (Tessa Thompson), lives happily in Harlem with her black husband, Brian Redfield (Andre Holland), while the other woman, Clare (Ruth Negga), passes as white and lives with her wealthy and racist husband, John Bellew (Alexander Skarsgård).

When they reconnect after many years, both of their worlds change – leading to a mutual obsession that ultimately results in tragedy.

Irene is both in awe and disgusted by Clare’s lifestyle. While Clare, on the other hand, envies the life Irene lives. As they become more enmeshed in each other’s lives, Irene becomes more antagonistic toward Clare and jealous – especially as Clare grows closer to her husband.

But is Irene’s jealousy directed at her husband or with Clare? Is Irene attracted to Clare sexually and repulsed by it? While open to interpretation, it’s hard to ignore the longing glances, the touch of a hand, the subtextual dialogue, and camera movements suggesting as much. It has always been one interpretation of the novel – ambiguous as it is.

But it’s the performances of Tessa Thompson and Ruth Negga that carry the film.

Tessa Thompson gives one of her best performances as Irene, while Ruth Negga is luminescent in her role as Clare. Both actresses give performances so powerful; you can feel their emotions in every scene of the film.

Thompson has an incredible ability to make you feel Irene’s pain, her joys, her fears, her jealousies, all of it.

Meanwhile, Negga manages to evoke several different emotions in Passing using an accent reminiscent of Judy Garland. While Thompson gives a showier, meatier performance, Negga is the one who haunts you. Her eyes convey every word she never says. It’s stunning to watch.

It would be impossible to imagine Passing not receiving some awards for the performances or Hall’s expert direction.

Besides the strong directing, excellent acting, and writing, the look of Passing is gorgeous. From the beautifully crafted costumes to the cinematography, Passing is a visual treat. Even the music score is good.

Hall chose to film the movie in black and white giving it an old Hollywood feel while also adding to its timelessness. Every scene captivated me, and by the end, I had more questions than answers! But that ambiguity in both the book and film makes it even more powerful as a narrative.

Fans of the novel will appreciate that Hall is faithful to it while also not shying away from highlighting themes relevant to the audience today.

Overall, Hall adapts the classic novel in a minimalist but effective style. If you appreciate artistic and thoughtful period dramas, then you must see Passing. You won’t regret it.

Just be prepared for the dramatic ending! I’m still thinking about what happened days after watching the movie.

Have you watched the new Passing movie? What did you think of Rebecca Hall’s adaptation? Did you enjoy the film and performances? Do you agree with our movie review of Passing? Discuss in the comments below!