Next Year in Havana Synopsis: After the death of her beloved grandmother, a Cuban-American woman travels to Havana, where she discovers the roots of her identity–and unearths a family secret hidden since the revolution…

Havana, 1958. The daughter of a sugar baron, nineteen-year-old Elisa Perez is part of Cuba’s high society, where she is largely sheltered from the country’s growing political unrest–until she embarks on a clandestine affair with a passionate revolutionary…

Miami, 2017. Freelance writer Marisol Ferrera grew up hearing romantic stories of Cuba from her late grandmother Elisa, who was forced to flee with her family during the revolution. Elisa’s last wish was for Marisol to scatter her ashes in the country of her birth.

Arriving in Havana, Marisol comes face-to-face with the contrast of Cuba’s tropical, timeless beauty and its perilous political climate. When more family history comes to light and Marisol finds herself attracted to a man with secrets of his own, she’ll need the lessons of her grandmother’s past to help her understand the true meaning of courage. 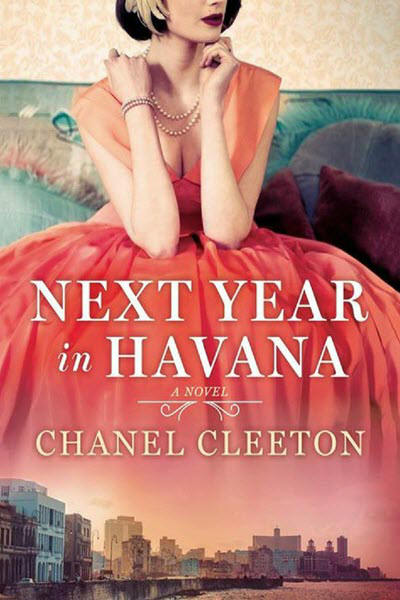 Next Year in Havana Review

Every so often, a book comes along that simply speaks to the heart. Next Year in Havana is one of those books. Cleeton’s voice is lush. Sounds of the ocean echo in the pages. The heat of summer prickles on your skin. The rush of love at first sight will sweep you away. Author Chanel Cleeton’s writing style will pull you in immediately. It’s incredibly intimate yet inviting. You connect immediately with Elisa and Marisol. They become your friends. More than that, they become your family.

As a result of Cleeton’s writing style, the Cuban culture becomes another character in her story. Cleeton’s exploration of what it means to be Cuban truly shines. She blends reality with Marisol’s romantic idea of Cuba. Marisol’s Cuba came from stories she heard as a child. The reality is harsher although the softer elements remain. Marisol’s perceptions slowly change the longer she is in Cuba. She begins to discover how being Cuban in Cuba is vastly different from being Cuban in America.

“It’s raucous and beautiful, and more than anything, I want to belong here, want this city to become a part of me.”

I loved how Cleeton described the same culture as something different when transplanted. When Marisol arrives in Cuba, she feels she’s home. Except, despite her Cuban blood and family history, she doesn’t belong. The resentment of Cubans left behind to live under Castro is strong. It’s that sentiment that Marisol navigates with something less than grace but more than ignorance. It also leads her on a journey of self-discovery. One that parallels her grandmother’s own journey.

Cleeton’s leading men in Next Year in Havana are beyond swoon-worthy. In the past, Elisa falls hard for a revolutionary. Pablo’s passion for life, for Cuba and for Elisa, open her eyes to the world around her. She begins to see things differently. Elisa struggles to reconcile these changes in herself and in her country. Her love for Pablo forces her to re-examine her privilege. As a result, she finds herself torn between her love for Pablo and her family.

“There is something intimate about the scent of soap and man, layers stripped away between us.”

Marisol’s Luis is a modern-day version of Pablo. His keen intellect, hidden rebellion and immediate love for Marisol make him as irresistible to Marisol as Pablo was to Elisa. Cleeton’s romantic narrative is divine. It ranges from softly whispered secrets to soul-consuming passion. Yet, it never devolves into anything explicit or graphic. Instead, it gently unfolds while still being all-consuming. It is impossible not to feel a pang in your heart as Marisol and Elisa fall in love with men whose lives are rife with complications.

Yes, please! This would be a gorgeous movie. The flashbacks of 1950s Cuba set against Cuba in the 21st Century would be incredible. Movies like Slumdog Millionaire or Forrest Gump come to mind. The Romanticism of Cuba’s political landscape in both time periods would also translate well to the big screen. And then, of course, is the romantic love story. To see the two breathtaking romantic relationships brought to life would be amazing.

However, casting would be extremely important. Cleeton’s characters pull from the very fabric of Cuba. Thus, some connection to the emotion of what it means to be Cuban is important. So, newcomers or unknowns might be best for those pivotal roles. However, that is a risk for any production. In any case, the casting of Latino actors for the roles is a must in my opinion.

Final Thoughts on Next Year in Havana

I cannot express enough how much this book spoke to me. From the imagery to the romance, Next Year in Havana is a treat for the heart. It’s poetic and hypnotic. It brings the past to the present, melding them into a beautiful story of family, love, and sacrifice. If you are looking for a gorgeous, historical romance, this is the book to read!

Next Year in Havana is available at your favorite bookstore or online at Amazon, Barnes and Noble, Kobo or Google Play Books.

Have you read Next Year in Havana? What did you think? Drop me a comment below and let’s chat!

Our romance-themed entertainment site is on a mission to help you find the best period dramas, romance movies, TV shows, and books. Other topics include Jane Austen, Classic Hollywood, TV Couples, Fairy Tales, Romantic Living, Romanticism, and more. We’re damsels not in distress fighting for the all-new optimistic Romantic Revolution. Join us and subscribe. For more information, see our About, Old-Fashioned Romance 101, Modern Romanticism 101, and Romantic Living 101.
Pin this article to read later! And make sure to follow us on Pinterest.
By Catherine on July 5th, 2018