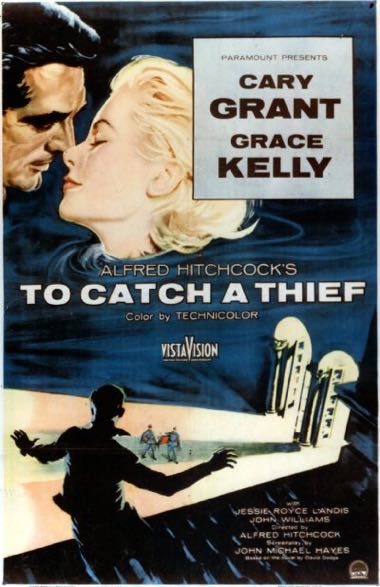 When Alfred Hitchcock requests that you be in one of his movies, saying no is not an option. Such was the case with Cary Grant in Hitchcock’s romantic comedy thriller To Catch a Thief. Hitchcock actually convinced Grant to take part in the film even though he had announced his retirement from the screen in 1953. Then again, To Catch a Thief isn’t your average Hitchcock film. If you’re expecting thrills and chills that will keep you up at night, then look elsewhere. While the film does center around one of Hitchcock’s recurring themes, an innocent man being pinned for a crime, Hitchcock takes a decided step away from the thriller/horror genre with this film. While there are suspenseful elements in the film, they are not emphasized, making way instead for the witty comedy and romantic tension between Cary Grant and Grace Kelly. The whole film is really quite a grand exciting adventure.

The film begins with John Robie a.k.a. “The Cat” (Cary Grant), a retired jewel thief, lounging in his breathtaking villa in France. Then the police show up, and the adventure begins. Why are the police after John, you ask? Well, it turns out that a copycat thief has been stealing priceless jewels from the rich denizens of France, and making it look like the work of John. Narrowly escaping from the clutches of the police, John decides to go on a mission to find this copycat and turn him in. After escaping to Cannes in the French Riviera, John tracks down a Mr. Hughson, an insurance agent for Lloyds of London, and the man insuring a large number of the rich elite’s jewels. John convinces him that the best plan of action is to use a thief, namely him, to catch a thief. After Hughson agrees to the plan, John promptly asks for a list of possible victims, or rather the richest people in the area. While Hughson is understandably hesitant to hand over such a list to a former world-renowned jewel thief, he does so, and John goes off to do some hunting.

John decides to begin conducting his search at one of the hot spots for the elite, the grand Carlton Hotel. While there, he meets wealthy American widow Jessie Stevens (Jessie Royce Landis), who is in Europe helping her spoiled, aloof daughter, Frances, find a husband. As she is a top contender for being a victim of the copycat, befriending Jessie provides a prime opportunity for John to watch out for the thief. This friendship comes with an unexpected addition, however. Jessie’s daughter, Frances, becomes intrigued by John when he refuses to fawn over her as other men do. After the trio’s first meeting together, John offers to walk Frances to her room. On the way, John comments on Frances’s husband hunting.

“You’re here in Europe to buy a husband.”

“The man I want doesn’t have a price.”

This devil-may-care attitude seems to spark interest in Frances. At the door to Frances’s room, just as John is about to depart, she gives him a whopper of a kiss. It would seem Frances appreciates her men playing hard to get. Like many women, Frances is attracted to what she can’t have.

During the following days, Frances and John spend more and more time together, developing romantic feelings for each other along the way. At one point, Frances reveals that she has deduced John’s real identity as the infamous “Cat.” I noticed during this interlude that, rather than Grant being the romantic aggressor, it is Kelly’s character that romances Grant. This culminates in Frances declaring her love for John during one late night rendezvous. But, as every fan of romance knows, the lovebirds can’t get off that easily. The story isn’t even over yet.

The morning after Frances’s confession, she finds out that her mother’s jewels have been stolen. She immediately suspects John, and goes so far as to call the police and inform them of his whereabouts and newest acquisition. Thank goodness for Jessie’s more level head. Dismissing her daughter’s accusations, Jessie stands behind John’s claim that he is innocent, and agrees to help the retired cat burglar catch the real culprit.

That night, John continues on his mission by staking out one of the grand estates. He ends up in a struggle with an attacker, who ultimately falls over the side of a cliff to his death. The man turns out to be Foussard, a member of John’s old gang from when he was with the French Resistance. The police name Foussard as the thief, and the case seems to be closed. John, however, is not convinced that Foussard was actually the thief.

Not ready to give in, John makes plans to try and capture the thief during a lavish masquerade ball at one of the villas. While he’s lurking on the rooftop of the building, he sees another figure making his way across the roof. John manages to catch up to the thief and unmask him…her (the thief turns out to be Foussard’s daughter, Danielle), and force her to confess her guilt to the police.

In a rather abrupt scene change, we next see John having just returned to his villa in a mad rush. Who was he running from? Could it be Frances? As it turns out, Frances noticed his quick departure, and hurried straight after him. Approaching him on the patio of his villa, Frances calls him out on his rude departure. In a rare moment, John looks rather flustered and a bit sheepish. Frances continues to convince John that they belong together, switching the traditional roles of courtship. She appears to have convinced John in the end when they embrace, and we are left with Frances making a comment about how much her mother will enjoy staying in John’s villa.

As the credits rolled, I found myself feeling quite content with the film. I enjoyed its comedic yet sophisticated atmosphere. The actors were absolutely superb. Grant exudes charm with his devil-may-care attitude, playing the part of the reformed rogue. His acting is confident and he carries of the comedic elements of the film beautifully. It’s no wonder he wins the hearts of leading ladies and the audience. Grace Kelly shines equally as bright. Her gorgeous looks and extravagant clothes work perfectly to set the tone of her character, that of a spoiled rich girl. She does an excellent job playing the cold, aloof woman when we first meet her. Then seeing her change into a warm, lively character as she spends time with John, demonstrates Kelly’s range and her spot on interpretation of the role. The actors really keep the plot exciting and engaging.

The script also contributes to the lively feel of the film. The dialogue is delightful, coming across as witty and slick, but with an element of sophistication. The film is filled with double entendres, with some scenes coming across as downright racy due to the script and pointed symbolism. It never steps over the line into ugly, however, managing to remain likeable and comical during the movie.

One amusing line is said during a picnic John and Frances have. Frances is in full romance mode, oozing charm and flirting madly, when she asks John, “You want a leg or a breast?”

John replies, “You make the choice.”

If you don’t get the underlying meaning in that, then I’m afraid much of the dialogue will go straight over your head. I, for one, found it highly entertaining. The symbolism in one scene did, however, get just the tad ridiculous and over-the-top. But, then again, that might have been the point.

During John and Frances’s late night rendezvous when Frances declares her love, as the two get closer to kissing and the double entendres take the limelight, the camera keeps panning to the window. Out the window, we see firecrackers erupting in the sky. As the scene becomes increasingly romantic, the camera pans to the window and the fireworks more often. The scene ends with the camera cutting from the kissing couple to a particularly large fireworks display. I hope I don’t have to explain that one.

Topping off the list of great aspects of this film is the spectacular setting. The scenery of Cannes and the French Riviera is stunning, something that Hitchcock takes advantage of. The film is filled with striking visuals. Viewers are treated to sights of lush gambling rooms, gilded hotel chambers, grand villas, casinos, and hotels, not to mention the awe-inspiring scenery of the vistas along the Cote d’Azure. The film is filled with shots from great heights down yawning chasms, glimpses of ruins on high hills, views across the Mediterranean harbors, and, often in the background, the sparkling, clear blue sea.

To Catch a Thief contained so many wonderful elements that came together to form one amazing whole. If I were you, I’d run out and rent it immediately. I promise you it won’t disappoint.

Make sure to keep up with my journey of watching classic films here.

Our romance-themed entertainment site is on a mission to help you find the best period dramas, romance movies, TV shows, and books. Other topics include Jane Austen, Classic Hollywood, TV Couples, Fairy Tales, Romantic Living, Romanticism, and more. We’re damsels not in distress fighting for the all-new optimistic Romantic Revolution. Join us and subscribe. For more information, see our About, Old-Fashioned Romance 101, Modern Romanticism 101, and Romantic Living 101.
Pin this article to read later! And make sure to follow us on Pinterest.
By Rebecca Lane on February 19th, 2015