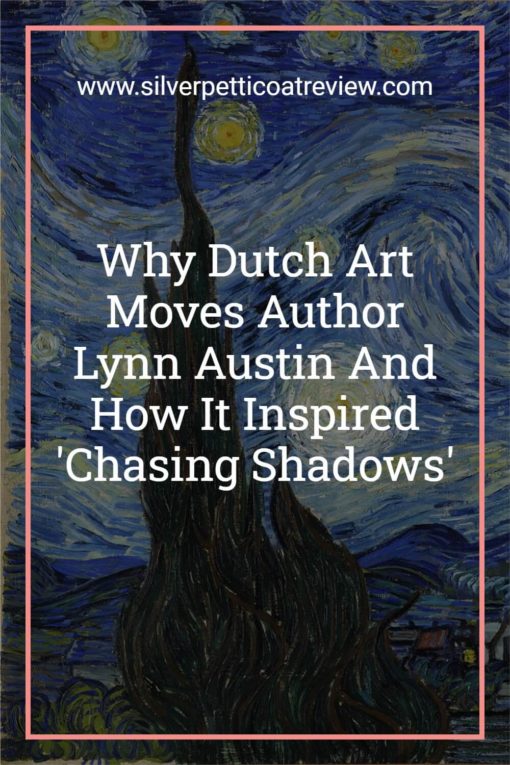 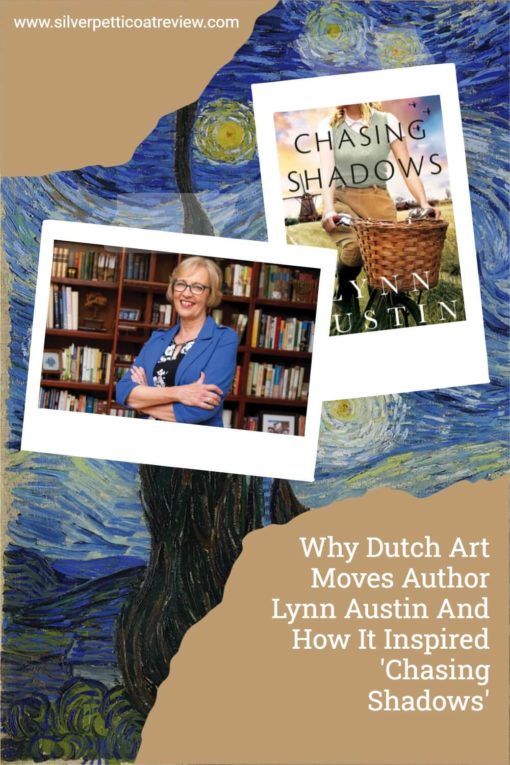 Lynn Austin, the bestselling author of numerous Christian Historical Fiction books, is back with a new novel: Chasing Shadows. She’s an inductee into the Christy Award Hall of Fame (winning eight Christy awards), and the Hallmark Channel even adapted one of her novels (Hidden Places).

Well, she’s here to discuss her latest inspirational novel that is already getting fabulous reviews! She talks about how Dutch art inspired her creativity, why Vincent van Gogh is her favorite Dutch artist, and even discusses his faith and his struggle with mental illness.

So, read on and find out more about this lovely new book and the Dutch Masters.

I’ve learned over the course of my thirtysome years of writing that creativity needs to be nurtured. If I want my writing to stay fresh and alive, I need to take myself on an “artist’s date” (as Julia Cameron calls it in The Artist’s Way) to refresh my creativity.

And I’ve figured out that one of the things that inspires my creativity is viewing great artwork. Each artist has a unique way of seeing the world, and his viewpoint shines through his work, just as each author’s viewpoint shows in her writing.

When it comes to artists, I’ve found the Dutch masters particularly inspirational. On my many trips to the Netherlands for book tours, my Dutch publisher has treated me to visits to their outstanding art museums, such as the Mauritshuis in The Hague and the Rijksmuseum and Van Gogh Museum in Amsterdam.

I could spend hours there, and I’m always filled to the brim with creative inspiration afterwards. There’s such beauty in the serene Dutch landscapes and so much depth in the portraits.

These great masters have been especially helpful in inspiring my newest novel, Chasing Shadows, which takes place in the Netherlands during World War II. The Dutch declared neutrality when the war broke out, but the Nazis staged a surprise invasion and quickly overran the tiny country, turning the lives of my main characters—Lena, Miriam, and Ans—upside down.

In creating my characters, I tried to burrow deep inside their hearts, capturing their grief and fear as they faced the Nazis so my readers could experience it, too. One of my favorite artists, Rembrandt, did especially well with emotion in his paintings. Unlike other portrait artists of his day who minimized their subjects’ flaws, Rembrandt painted his characters as if peering into their souls, showing deep emotion in their facial expressions and eyes.

I especially love the father’s expression in his painting Return of the Prodigal Son. For inspiration, I like to keep photographs on my desk of what I imagine my characters to look like, so I require a lot of diverse faces of various ages. Rembrandt’s work The Night Watch, which I saw in the Rijksmuseum, features enough fascinating characters to people an entire novel!

Naturally, a novel about WWII requires a lot of research, which I then distill into a story. I search especially for a few vivid details that will bring the story to life—such as an eyewitness’s account of her emotions as she watched Nazi paratroopers spilling from airplanes in the dark of night.

A favorite artist for details is Vermeer, who painted scenes from everyday life, noting ordinary details most people would miss. I saw his famous painting Girl with a Pearl Earring in the Mauritshuis, and I marveled at how he brought the young girl to life so vividly.

Like the characters in my novel, the Dutch were people of faith during World War II, and it provided the strength and courage to endure five long years of war and Nazi occupation. The devout faith of many artists also inspires me as it shines through their work.

Peter Paul Rubens was an ardent believer whose faith shows not only in his paintings of religious subjects, but in his others, as well. One of my favorites is Old Woman and Boy with Candles, which I saw in the Mauritshuis.

The entire background of the painting is in darkness yet the wrinkled face of the old woman and the smooth face of the boy are brilliantly illuminated by one small candle. The hope shining in their eyes speaks of how the faintest spark of hope and faith can bring light into the darkest circumstances. It’s a theme that I hope will shine through my novel, too.

My favorite Dutch artist is Vincent van Gogh, whose Sunflowers and Starry Night are easily recognizable. I could spend all day in the Van Gogh Museum viewing his works, which pulse with vibrant color and emotion.

Van Gogh is mostly known for his struggle with mental illness, which caused him to cut off his ear, but there is so much more to his story. He inspires me to dig deeply into the backgrounds of my characters and the motivations behind their behaviors. Each of my characters’ response to the Nazi persecution of Jews depends on a variety of complex factors.

What isn’t well-known about Vincent van Gogh’s background is his fervent Christian faith. His father and grandfather were ministers, and Vincent wanted to follow their footsteps. But after failing the seminary entrance exam, he became a missionary to impoverished coal miners in Belgium instead.

RELATED: No Journey Too Far By Carrie Turansky – Here Is The Wonderful Prologue

Compassion and God’s unconditional love drove him to become so involved in the people’s lives that he lived in poverty himself to help meet their needs. His missionary board fired him for becoming too involved! He then turned to art as his way to serve God, painting ordinary laborers in ways that showed them as bearers of God’s image, no matter how poor.

Sadly, van Gogh struggled with mental illness (as does one of my characters in Chasing Shadows), yet it didn’t stop him from creating works of passionate beauty. His great masterpiece Starry Night depicts the view from the window of his asylum. The starry heavens take up most of the painting, radiating light into the dark night as if to portray God reaching down into a darkened world.

It’s a testimony to van Gogh’s courage to see God’s love and beauty in spite of his own darkness. For the Dutch people as well as for my characters, responding to Nazi darkness and oppression required great courage. And the greatest motivator of courageous acts is love.

Vincent van Gogh said it best in his own words: “Love many things, for therein lies the true strength, and whosoever loves much performs much, and can accomplish much, and what is done in love is done well.”

For fans of bestselling WWII fiction comes a powerful novel from Lynn Austin about three women whose lives are instantly changed when the Nazis invade the neutral Netherlands, forcing each into a complicated dance of choice and consequence.

Lena is a wife and mother who farms alongside her husband in the tranquil countryside. Her faith has always been her compass, but can she remain steadfast when the questions grow increasingly complex and the answers could mean the difference between life and death?

Lena’s daughter Ans has recently moved to the bustling city of Leiden, filled with romantic notions of a new job and a young Dutch police officer. But when she is drawn into Resistance work, her idealism collides with the dangerous reality that comes with fighting the enemy.

Miriam is a young Jewish violinist who immigrated for the safety she thought Holland would offer. She finds love in her new country, but as her family settles in Leiden, the events that follow will test them in ways she could never have imagined.

The Nazi invasion propels these women onto paths that cross in unexpected, sometimes-heartbreaking ways. Yet the story that unfolds illuminates the surprising endurance of the human spirit and the power of faith and love to carry us through.

Lynn Austin has sold more than one and a half million copies of her books worldwide. A former teacher who now writes and speaks full-time, she has won eight Christy Awards for her historical fiction and was one of the first inductees into the Christy Award Hall of Fame. One of her novels, Hidden Places, was made into a Hallmark Channel Original Movie. Lynn and her husband have three grown children and make their home in western Michigan. Visit her online at lynnaustin.org.

You can buy Chasing Shadows by Lynn Austin HERE.

By The Silver Petticoat Review on June 9th, 2021