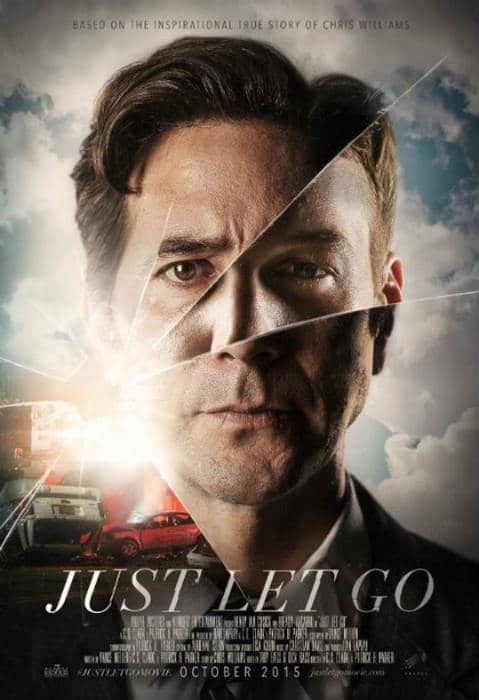 Just Let Go is one of those movies that stays with you, partially because it’s an amazing true story and partially because the film is incredibly made. And with a memorable performance from Henry Ian Cusick (Lost), this indie film is worth checking out.

Just Let Go tells the heartbreaking true story of Chris Williams, a loving husband and father of four who is in a horrible, life-changing car wreck in 2007 when his car (with most of his family inside) is hit by a teenage drunk driver. In a single moment, his life changes forever as his pregnant wife and two of his children are killed instantly. But Williams makes a surprising choice (one he struggles with throughout the film); he decides to forgive the young man and ultimately even have a relationship with him – though the latter is only hinted at in the film.

The story follows Williams in his journey as the crash is presented in a non-linear fashion. We start with his life before the crash and then cut to a little while after as we see it in shambles. The film then switches between the present and the past to lead to the ultimate climax and resolution of the film in a way that will leave you glued to your seat.

Just Let Go spends quite a bit of time in the courtroom as his family, lawyer and friends encourage Chris to fight for the teenager to be tried as an adult since he was 17 – only a few months shy of turning 18. However, Williams feels conflicted by this because the boy would then have to spend 30 years in prison. It’s this conflict between justice and mercy that drives the narrative.

The Co-Directors, Christopher S. Clark and Patrick Henry Parker made an interesting filmmaking choice in the depiction of the teenage drunk driver, Curtis Wright. In the courtroom as well as during the accident, he’s presented in shadows and profiles. He’s dehumanized in a way. It’s not until Williams comes face to face with him that we really get a good look at this teenage boy and how human he really is – and how young. We get to see the effect forgiveness has on both Williams and Wright in an emotional way.

In fact, the film never feels manipulative or lacking in sincerity with over the top preachy speeches and cheesy music. This was a real person presented in a very real, very raw way. Every tear from the audience feels genuine as it’s easy to picture yourself in his shoes. You experience his grief with him, anger, doubt and ultimately hope and forgiveness (which is in part thanks to Cusick’s performance). The Directors allow us to spend time with each family member he lost – mostly through the use of flashbacks and home videos Williams watches. We understand his loss and ultimately we understand his forgiveness – especially when we learn something about his own past that unfolds throughout the film.

All of the performances in Just Let Go are fantastic as well. Henry Ian Cusick shines as the grieving husband and father, making it easier to understand Williams’ point of view. He carries the film and gives one of his best performances. The rest of the cast are great as well. In fact, I’d be remiss not to point out the strong performance from Oscar-nominated actress Brenda Vaccaro as Nadine Williams – Chris’s mother and grieving grandmother. With her, we’re given a different perspective of the situation. She wants justice and is filled with a lot of anger. In some ways, her reaction is perhaps more recognizable to us. Vaccaro presents a range of emotions throughout the film and leaves you wondering why we don’t see more of her in cinema. She was in quite a few big films in the 1970s after all.

Besides the acting, the cinematography, musical score and the believable script also enhance the quality of this film. However, I particularly enjoyed the love story between Chris Williams and his wife Michelle and the way it was presented. There was something beautiful and true about their relationship, which makes her loss all the more felt.

…the story is universal for anyone of any faith, or lack thereof and can be enjoyed by anyone who appreciates an uplifting true story.

If I have any criticism of this lovely film it is of the inaccurate depiction of the church building from The Church of Jesus Christ of Latter-day Saints where Williams is a preacher (the accurate term would be Bishop). The filmmakers seemed to purposely combine different Christian religions so as to appeal to a wider demographic. So, while I understood the creative choice, some may leave the theater confused as to what Chris Williams’ actual religion was, especially considering this is a true story. However, this is a very small complaint as the reasoning behind the choice (or at least this is my guess) seems sensible.

Technically, Just Let Go is a Christian film. But the story is universal for anyone of any faith, or lack thereof and can be enjoyed by anyone who appreciates an uplifting true story. This is not presented as a preachy film only meant for Christians. Forgiveness is something everybody is capable of and a powerful force for good in the world. And if you’re left with any message in the film it is just that. Think of someone you can forgive and “just let go.”

Just Let Go is set for limited release starting October 9, 2015. You can learn more about the film at www.justletgomovie.com.

Our romance-themed entertainment site is on a mission to help you find the best period dramas, romance movies, TV shows, and books. Other topics include Jane Austen, Classic Hollywood, TV Couples, Fairy Tales, Romantic Living, Romanticism, and more. We’re damsels not in distress fighting for the all-new optimistic Romantic Revolution. Join us and subscribe. For more information, see our About, Old-Fashioned Romance 101, Modern Romanticism 101, and Romantic Living 101.
Pin this article to read later! And make sure to follow us on Pinterest.
By Amber Topping on October 5th, 2015