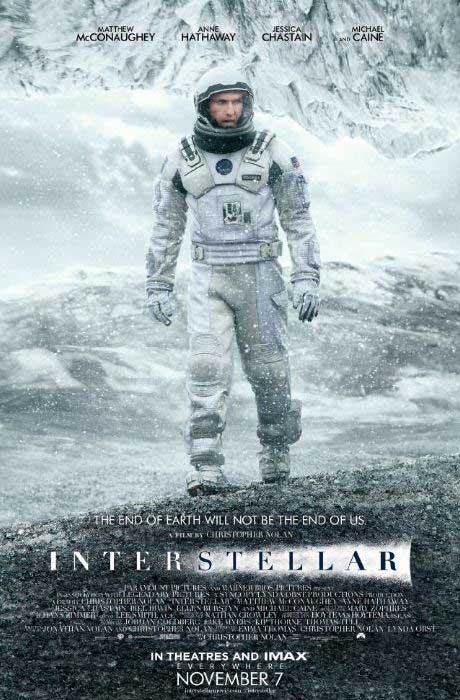 For those who love intelligent science fiction and for even those who love character driven stories, there’s a lot to admire about Christopher Nolan’s Interstellar. The story follows Cooper (Matthew McConaughey) and a group of astronauts as they attempt to find a habitable planet to live on now that earth has become unlivable. The dust is suffocating and the food evaporating. Time is of the essence (as in time for humanity is running out) in this unique film about family, love, and hope.

If you go in expecting guns blazing and a sci-fi film with tons of action, you may be disappointed with the results. At times Interstellar is very slow moving (particularly in the middle); however it is the quiet moments that truly make this film wonderful. The characters are rich with added depth (the 3 hour movie has the time to do so), and you feel for Cooper and his family so deeply that some moments become extremely tense and filled with emotional suspense. This suspense will likely keep you on the edge of your seat…

More than anything else, Interstellar really is a film about the father/daughter relationship between Cooper and Murph. Together, they unravel NASA’s secret mission to save humanity, but in the unraveling Cooper and Murph must be parted, his piloting skills needed to save everyone. “Next time you see me, we might be the same age,” Cooper jokes at one point to Murph. This idea of “time” really becomes important to the rest of the story. Without giving anything away, the film really emphasizes the preciousness of time and how easily and quickly time moves on. The way time is presented in this movie is a thing of beauty and even poetry. There are moments so literary that the hair on my arms stood tall.

The way time is presented in this movie is a thing of beauty and even poetry.

Aside from Cooper’s family left behind on a dying earth, are the astronauts seeking to save humanity. Most notable in the bunch is Brand played by the wonderful Anne Hathaway. Headstrong, Brand likes to do things her own way (a flaw I appreciated), much to the detriment of the mission sometimes. Nevertheless, it is her heart and belief in love that stand out, making her a true asset to the team. The intense conversations between Brand and Cooper are fascinating and I couldn’t help but root for them romantically. Don’t get me wrong though. This movie is no romance. Still, something between these two felt real and I believed in it. I believed in them. When the ambiguous ending rolled around (one in which I will not spoil), I truly felt it was earned.

For those who like straight-forward linear films, this may not be for you. But for those of us who like non-linear tales, Interstellar may be your perfect match. One aspect of the film I appreciated was the future interviews of older people on television that looked back at the past, back when humanity had hardly any hope. The technique and fascinating narrative style reminded me of the underrated TV show Jack and Bobby, as members of Bobby’s family reminisce about his past and how he one day became President of the United States. It’s a style that really pulls you into the story. Furthermore, about two-thirds of the film in, the story takes a really unusual narrative turn. This is one strange film that you should be prepared for. Don’t expect the movie to be like the previews. It is much weirder (but in a good way).

Overall, there wasn’t much for me to dislike about Nolan’s latest production. Sure, there were a few moments that I might have changed (I can’t say what without spoiling anything and I do think the mysteries and twists are important to go in unspoiled), but as a whole this is a film filled with wonderful performances (Michael Caine and Jessica Chastain are phenomenal in this as well), interesting characters (including a sarcastic robot), beautiful dialogue, themes that stay with you long after the credits roll, and a gripping story to hold your interest. While the slow moving moments and odd twist of events may turn off some, for me, Interstellar is one of the year’s best, one that shouldn’t be missed.

Our romance-themed entertainment site is on a mission to help you find the best period dramas, romance movies, TV shows, and books. Other topics include Jane Austen, Classic Hollywood, TV Couples, Fairy Tales, Romantic Living, Romanticism, and more. We’re damsels not in distress fighting for the all-new optimistic Romantic Revolution. Join us and subscribe. For more information, see our About, Old-Fashioned Romance 101, Modern Romanticism 101, and Romantic Living 101.
Pin this article to read later! And make sure to follow us on Pinterest.
By Autumn Topping on November 30th, 2014