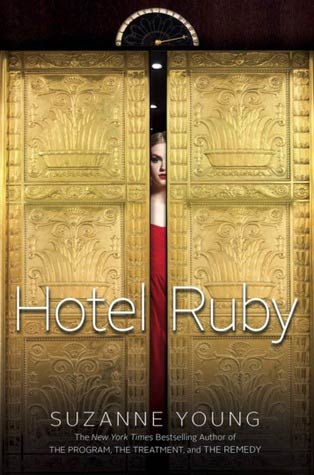 When Audrey Casella arrives for an unplanned stay at the grand Hotel Ruby, she’s grateful for the detour. Just months after their mother’s death, Audrey and her brother, Daniel, are on their way to live with their grandmother, dumped on the doorstep of a DNA-matched stranger because their father is drowning in his grief.

Audrey and her family only plan to stay the night, but life in the Ruby can be intoxicating, extending their stay as it provides endless distractions—including handsome guest Elias Lange, who sends Audrey’s pulse racing. However, the hotel proves to be as strange as it is beautiful. Nightly fancy affairs in the ballroom are invitation only, and Audrey seems to be the one guest who doesn’t have an invite. Instead, she joins the hotel staff on the rooftop, catching whispers about the hotel’s dark past.

The more Audrey learns about the new people she’s met, the more her curiosity grows. She’s torn in different directions—the pull of her past with its overwhelming loss, the promise of a future that holds little joy, and an in-between in a place that is so much more than it seems…

And the 13th chapter will only add to the mystery behind the 13th floor of Hotel Ruby…and ultimately, what it means for Audrey.

Welcome to the Ruby.”

I first picked up Hotel Ruby because I was hoping for some YA version of the Spanish TV series Grand Hotel. Unfortunately, that didn’t happen. Nevertheless, I was instantly intrigued by the premise and mysteries behind the Hotel Ruby. Why was Audrey put on the special 13th floor? What did it mean? And why wasn’t she invited to the ballroom party when she’s a guest at the hotel? There are several questions that made me keep turning the page. I do love a good mystery after all.

But Hotel Ruby is really more than just a mystery, it is also a book about grief. Audrey is dealing with the death of her mother and abandonment of her father who can’t handle his wife’s death. This characterization of Audrey really makes her feel like a real person struggling with real problems. Dealing with the death of a loved one is also something many of us will be able to identify with.

Aside from the themes of death and grief is the budding romance between Audrey and a young man staying at the hotel, Elias Lange. Because of the short timeframe of the novel, however, it’s a little difficult to get behind this relationship one hundred percent. I ‘liked’ them but wasn’t invested in any way. The relationship felt like more of a way to forget about her problems. I guess I just wanted a little more depth in the romance department. Still, I was entertained.

As a whole, Hotel Ruby is a fun read with several twists and turns along the way. If you like mysteries with just a touch of the supernatural and romance, then this book is a great choice!

Content Note: While not pervasive, there is strong language sprinkled throughout Hotel Ruby.

Will you be reading Hotel Ruby? Sound off below…

Our romance-themed entertainment site is on a mission to help you find the best period dramas, romance movies, TV shows, and books. Other topics include Jane Austen, Classic Hollywood, TV Couples, Fairy Tales, Romantic Living, Romanticism, and more. We’re damsels not in distress fighting for the all-new optimistic Romantic Revolution. Join us and subscribe. For more information, see our About, Old-Fashioned Romance 101, Modern Romanticism 101, and Romantic Living 101.
Pin this article to read later! And make sure to follow us on Pinterest.
By Autumn Topping on March 15th, 2016