I get a monthly YA subscription box, and every month I look forward to seeing what new and exciting book will be arriving in the mail for me. Recently, the book in my box was Heart of Iron by Ashley Poston. Published this year, Heart of Iron immediately caught my interest. It’s been described as the television show Firefly meets the novel Cinder but based on the story of Anastasia. Since I love all three of those things, I was excited to dive into this new, and intriguing, tale.

Ana has no memory of her past, only knowing her life aboard the Dossier. She has found a new family, one that she loves dearly. She fits in quite well among the smugglers and scoundrels that have raised her. Although she is close to Jax, the pilot, Siege, the captain, and the other members of the crew, her closest friend is D09. D09, or Di, is a Metal (a robot) that has been with Ana for as long as she can remember, and he’s her best friend. When D09 begins to glitch, Ana refuses to lose him.

RELATED | THE GLASS SPARE – A DARK YA FANTASY WITH PRINCESSES, CURSES, AND ROMANCE

Trying to learn how to save Di, she finds the coordinates to a missing ship, the Tsarina. Along the way, she finds Robb Valerio, who is also searching for the Tsarina. On the night the entire royal family died in a fire, his father also went missing. Robb believes his father is still alive and might now the truth about what happened that night.  When Robb finds himself on the Dossier, his wealthy family begins to search for him, putting the crew of the Dossier in danger of discovery. 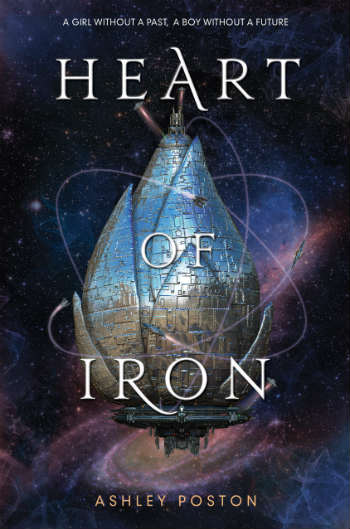 Later, it’s revealed that Ana is Princess Ananke, the rightful heir to the throne and the Goddess reborn. Her grandmother, the Grand Duchess, is thrilled to be reunited with her and begins planning for her coronation.  But things are not what they seem. As Ana struggles to learn where she truly belongs, she finds out what truly happened the night her family died and learns new things about the Metals that inhabit her kingdom, including Di. Full of sacrifice and love, Heart of Iron looks at what home is. It might make you laugh and cry too.

Ana’s a stubborn young woman. She’s also fiercely loyal to those that she loves. This includes everyone from Di to rest of the crew of the Dossier. Ana can also be impulsive. She cuts off her hair in the capital and sets out to save Di no matter the cost to her. When she learns that she is actually the rightful Empress, she is shocked and convinced that it has to be a mistake. Despite her headstrong nature and her refusal to play by the rules, Ana’s a character who you can’t help but root for. You want her to succeed in her quests and have the happy ending that she deserves.

D09, or Di, is a Metal and Ana’s best friend. He loves her and would do anything to save her and keep her safe. Di is the voice of reason. He’s willing to go above and beyond the line of duty to do what he thinks is right. He’s sure that the glitch will be the end of him. Still, he’s determined to not end up HIVED. HIVED Metals are mindless drones of the kingdom. I loved watching this character unfold through the story.

Robb Valerio is an interesting character. He’s a wealthy young man, and his brother was about to be named the next Emperor when Ana arrived. Ironically, Robb is the one who figured out her identity first. Robb’s mother and brother are terrible people who don’t care about him. His mother is also not above using her son’s friends and loved ones against him to control him. In the end, he learns about what he wants and to chase after it.

Jax is a Solani, a member of a race that can read the stars and tell a person’s future through physical contact. He’s also a talented pilot and a good friend to Ana and Di. Jax, like the rest of his people, does not do well in the dark and consistently puts others ahead of himself. His true name is C’zar Taizu, which means he’s a prince.

There are two romances in Heart of Iron. The main romance, I thought, was the relationship between Ana and Di. No matter what happened throughout the book, they were both willing to sacrifice everything for the other. They were also best friends and their love seemed to be natural and organic. To me, this made several parts of the novel even more heartbreaking but still powerful. It’s a love story with unexpected twists and turns.

The second romance that blossoms through the book is the relationship between Robb and Jax. The thing that stands out about this relationship is the way it grows. In the beginning, the two are from vastly different walks of life and have to try to get along. But by spending time together, they learn that they are a surprisingly good match. Like Ana and Di, they are willing to make huge sacrifices for each other, though their story has a different ending than Ana and Di’s.

The romances in Heart of Iron are both examples of Old-Fashioned Romance, especially the relationship between Ana and Di. Ana and Di have a relationship that has built over years of mutual trust and caring. They are not in love because of their looks, but because of the nature of the other. Their connection is a deep one, and they almost don’t need words to communicate. The driving force of the beginning of the novel is Ana’s desire to save Di, because she refuses to imagine life without him. He goes along with her schemes, because without him there she will get in trouble. Like her, Di cannot imagine his life without Ana.

Di and Ana are willing to sacrifice everything for each other, even giving their own lives. Because she is a human and he is a robot, their connection is misunderstood, as is their love, although we see it blossom as the novel unfolds. When these two finally kiss, it is an earned kiss that left me smiling before the ending twist. This is the first book in a series and the ending made me sob, so things did not end well for this couple. However, I have high hopes that their connection is deep enough to overcome the issues that have separated them by the end of the novel.

Final Thoughts on Heart of Iron

A part of me was a little skeptical, since Firefly is so amazing, and I thought that Cinder was also quite brilliant. Clearly, no book could be as wonderful as “Anastasia in Space” sounded. I have never been so happy to be wrong about a book before. The world that Poston has created in Heart of Iron is fantastic. Plus, the characters are dynamic and fun, and the romances are engaging and believable. The pacing is great. Of course, we know who Ana is right at the beginning. Despite that, it still feels like an earned reward when she figures it out. The twist at the end was surprising, and that ending? Well, let’s just say that I am eagerly awaiting the sequel.

I thought that this story was brilliant, and could be an amazing film if done right. For me, this means that Ashley Poston is involved in the adaptation of the story, and that the special effects are handled well. Since Heart of Iron is set in a futuristic space-land and the romantic lead is a robot, there will be a ton of effects needed. I think it should be a mix of practical and computer effects, to help things look more real. This could be an awesome looking movie, or a really cheesy one. Bad effects could distract from the wonderful story, while good effects will enhance it.

I have some actors in mind, but let me know what you think! For Jax, I imagine Alex Pettyfer and I picture Robb as Nicholas Hoult. For Ana, I think that Troian Bellisario is a good fit. Not only does she have the hair, but she also has the facial structure that I pictured for Ana. I had a harder time with casting Di, but in the end, I thought that Rupert Grint would be a good choice. He can play both funny and serious, and I think he could play Di in an interesting and faithful way. When it comes to supporting characters, I just want them to fit into Poston’s vision. However, I do imagine a very diverse group of actors portraying this unique cast of characters.

Content Note: The main characters are smugglers. There is theft, kidnapping, verbal abuse from a parent, violence, loss of loved ones, brainwashing, and attempted murder. There is also some kissing, though nothing overly graphic.

Have you read Heart of Iron? What did you think? Let me know in the comments!

Our romance-themed entertainment site is on a mission to help you find the best period dramas, romance movies, TV shows, and books. Other topics include Jane Austen, Classic Hollywood, TV Couples, Fairy Tales, Romantic Living, Romanticism, and more. We’re damsels not in distress fighting for the all-new optimistic Romantic Revolution. Join us and subscribe. For more information, see our About, Old-Fashioned Romance 101, Modern Romanticism 101, and Romantic Living 101.
By Bailey Cavender on June 11th, 2018