Recently, I decided to sign up for a monthly book subscription box. The first month, I was excited because the book promised to be a fantasy that dealt with princesses, curses, adventure, love, and family. The book that I got was The Glass Spare by Lauren DeStefano, and it did not disappoint! This is a dark fantasy that made me think about family, corruption, and warfare. I loved every minute of it. 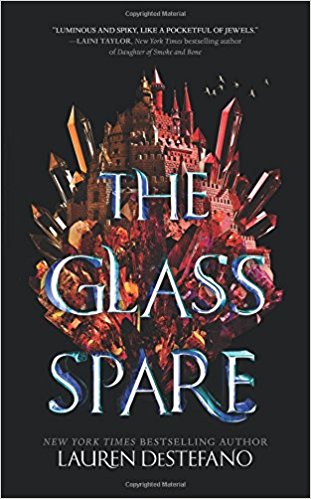 The Glass Spare is set in the kingdom of Arrod and the surrounding lands. The king of Arrod is constantly looking for ways to beat the other kingdoms, particularly the Southern Isles. He is a greedy and cruel king, who uses his children in a variety of ways. The oldest son, Owen, is the heir. He is, generally, thought to be a good prince who will be a good king. His siblings are the spares. Baren is the main spare, while Gerdie and Wilhelmina, or Wil, are the youngest of the four.

Gerdie makes himself useful by being a brilliant inventor who creates medicine and weaponry. Meanwhile, few people have ever seen Wil, so she gathers supplies for her brothers and works as her father’s spy. When she was born, Wil and her mother both nearly died. As a result, Wil has always been considered cursed.

One evening, Wil and Gerdie visit a traveling caravan. An old woman tells Wil that she has evil inside her. Soon, Wil is attacked. While defending herself, she learns that she can turn anything she touches into a gemstone, including people. Gerdie is determined to break the curse. Owen warns them that their father can never know; Wil would become a fearsome weapon. Owen also suggests that Wil find a way to visit Pahn, a Marveler who might be able to help her. Of course, he is in the Southern Isles. Wil sets out alone to find a cure for her curse.  Owen chases after her, with unforeseen and terrible consequences.

Finding herself in exile, Wil travels south. Through a variety of circumstances, she finds herself in the company of a young man who calls himself Loom. Loom is traveling with a young woman and her son. They are all from the Southern Islands and hate the royal family of Arrod. To stay safe, Wil keeps her identity a secret.

However, she is not the only one who is hiding the truth about who she really is. Soon, Wil finds herself embroiled in the very conflicts that she ran away to avoid. To her horror, she finds herself falling in love with her enemy. Even when she finds Pahn, her journey is not over. She needs to find the root of her curse. To do this, she has to go back home and confront her family once more.

This novel is well-woven. We get the information we need gradually. This gives the story a sense of mystery that it might not have had otherwise. Like Wil, the reader wonders about the cause of Wil’s curse. Loom and his backstory are shared gradually. There are also wonderful moments that give the reader glimpses into what is happening on both sides of the conflict. Eventually, we learn about life in the Southern Islands and what that royal family is like. But it never feels overwhelming.

The world-building itself is gradual. In the beginning, the reader only knows what Wil knows. As she travels, however, DeStefano begins to reveal a little bit more about Wil’s world. We the reader learn about the world as our heroine does. This can be frustrating at times because I wanted to know everything about the world at once. Realistically, however, it’s also a very effective way to tell the story.

Personally, I loved that the story went back to Baren and Gerdie occasionally. This kept the story connected to the rest of the main characters even with Wil somewhere else. To me, the main action of the story was Wil trying to break her curse and the corrupt kings. However, the heart of the story was more about the relationship between the siblings. This gave each character a more humanizing feel. Some of the siblings are more evil, like Baren and Loom’s sister, but they are still important.

One thing that I loved about The Glass Spare was the characters. Not only were they all unique, but they all had their own strengths and weaknesses. The fact that half the characters are from Arrod and half are from the Southern Islands adds an interesting dynamic to their relationships. The two nations hate and mistrust each other, especially the members of both royal families.

Our main character, Wil, is an adventurous girl who has never felt loved by her father. All she wants to do is prove herself useful so that she can explore the world as a royal spy. The discovery of her curse and the tragic consequences that it had for her family set her off on a journey unlike any she had ever imagined. I also loved Gerdie. I would read an entire novel about that character.

Each character that has to work together eventually finds themselves overcoming some of the mistrust inherent in who they are. That makes the conflicts and resolutions even stronger. I don’t want to give you too much information about the various characters. That might spoil the twists in the novel. However, it was lovely to see such a wide variety of characters in a fantasy. I quite enjoyed reading about these people and their interactions.

I thought the story was more about the sibling bond than romance. Despite that, the romance between Wil and Loom does play a large part in the story. They both know that they should not fall in love, but it begins to happen. Both of them are cursed. As a result, they understand each other in a way that no one else can. Later on, Wil learns that part of the reason she and Loom are drawn to each other is because they are both cursed. This makes their romance a little bit tragic. Is it all an illusion? I like to think not. I want these two to live happily ever after. Of course, I will have to wait until the sequel to find out the answers to this, and the other questions that The Glass Spare left me with.

If you like stories with curses, adventurous princesses, impressive world-building, the bond between siblings, and a little bit of romance, you may enjoy The Glass Spare.  It’s a book that I would also recommend if you enjoyed The Lunar Chronicles by Marissa Meyer. I had never read anything by Lauren DeStefano before, but after reading The Glass Spare, I certainly have added her to my list of authors to watch. This YA novel sparkles and shows off a wonderfully dark fantasy world full of wonderfully human characters with extraordinary gifts.

Content Note: This is a dark YA fantasy, so there are some instances of severe peril and violence.

Have you read The Glass Spare? What did you think? Let me know in the comments!

Our romance-themed entertainment site is on a mission to help you find the best period dramas, romance movies, TV shows, and books. Other topics include Jane Austen, Classic Hollywood, TV Couples, Fairy Tales, Romantic Living, Romanticism, and more. We’re damsels not in distress fighting for the all-new optimistic Romantic Revolution. Join us and subscribe. For more information, see our About, Old-Fashioned Romance 101, Modern Romanticism 101, and Romantic Living 101.
By Bailey Cavender on April 7th, 2018