From Twinkle, With Love by Sandhya Menon tells the story of sixteen-year-old Twinkle Mehra who wants to be a filmmaker and decides to write a series of letters to her favorite female filmmakers. These letters highlight Twinkle’s life, from her friendships, her family, her romances, and her filmmaker dreams. Twinkle is a wonderfully relatable character whose story is compelling and fun. When I think of light and fun summer reads, From Twinkle, With Love certainly comes into my mind right away.

The Plot – From Twinkle, With Love

Twinkle struggles with the loss of her best friend Maddie, who has drifted away from her to hang out with the popular girls, one of whom hates Twinkle. She is also dealing with her family, from her eccentric Dadi, or grandmother, to her mother, who can be emotionally distant at times. Twinkle also has boy drama. She has been in love with Neil Roy since she can remember. However, as she begins to spend time with his twin, Sahil Roy, she begins to develop feelings for him. Meanwhile, she has a secret admirer. 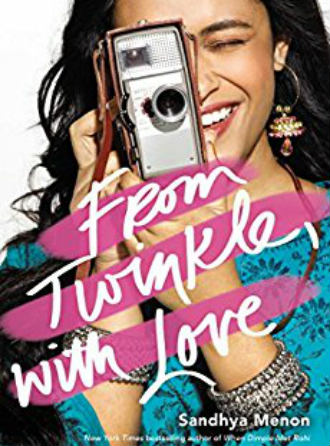 As Twinkle struggles with all these different issues, she and Sahil decide to make a film for the Midsummer Nights Arts Festival. The film will be a gender-swapped version of Dracula. This brings a wide variety of people together and introduces Twinkle to some new people who she is surprised to find she gets along with. Everything comes to a head, however, when the truth about Twinkle’s secret admirer is revealed, and Twinkle decides to do some cast interviews that take a harsh turn. Twinkle struggles with who she wants to be as she comes out of her shell in this delightful coming-of-age story.

Twinkle Mehra is a shy Indian-American girl who has a lot of feelings but doesn’t feel like she can share those thoughts with other people. As the novel goes on, Twinkle becomes a stronger and more assertive young woman. At times, she can be rude and unsympathetic to her friends, but at the same time, you understand where she’s coming from. Her reactions are logical, and at times, I was surprised that it took her so long to speak up.

Twinkle is a person who’s just trying to figure out her place and trying to find her own voice in a world that might not want to hear it. Her letters to directors give readers a view into her mind and allow us to watch her process the issues that many sixteen-year-old girls face. She is also believably dense when it comes to noticing the attention of boys.

The story is really Twinkle’s story, but the other main character is Sahil Roy. Sahil is half Indian and is the twin brother of Neil, a talented swimmer. Because of his brother’s fame, Sahil struggles with finding his place and his feelings of envy. His family is different from Twinkle’s, both being wealthier and more casual.

Through his texts with his friends, we learn more about him, from his easy-going nature, his determination, his support for his friends, and the fact that he has had a crush on Twinkle since they were eleven. He is a wonderful friend for Twinkle, helping her to come out of her shell and supporting her.

When it comes to high school romances, Twinkle and Sahil are a good one. They are a great pair as friends and as a producer and director. As they spend time together, they begin to realize that they might also be a great couple as well. Sahil and Twinkle have complementary personalities in many ways. Both of them are driven and determined to find their own voice in a world that sometimes doesn’t listen to them. Like most contemporary books, there is a misunderstanding and a conflict that tears apart the love story, but this makes the resolution that much sweeter.

If you’re looking for a fun and light coming of age story that deals with female filmmakers and finding your unique voice, check out From Twinkle, With Love. The story is compelling and fun. It’s light and fluffy but also knows when to take the story seriously. This is a hard line to walk, and Menon does it wonderfully. Twinkle is a realistic character and one who I couldn’t help but root for.

A movie adaptation of From Twinkle, With Love, would be a lot of fun, especially with the focus on filmmaking. I kept wishing that I could see Twinkle’s film in real life; it sounded delightful. I also imagine that, with the right actress to play Twinkle, her transformation would be amazing to see. The only hiccup would be making sure that the emails and messages are shared on screen because they are very important to the overall story, I think. I have no ideas for casting, but I am certain that Menon should be involved in any film that is made.

Content Warning: This would be a PG movie. There are moments of teens partying and some language, though nothing explicit in either case.

Have you read From Twinkle, With Love? Who would you cast? Let me know in the comments!

Our romance-themed entertainment site is on a mission to help you find the best period dramas, romance movies, TV shows, and books. Other topics include Jane Austen, Classic Hollywood, TV Couples, Fairy Tales, Romantic Living, Romanticism, and more. We’re damsels not in distress fighting for the all-new optimistic Romantic Revolution. Join us and subscribe. For more information, see our About, Old-Fashioned Romance 101, Modern Romanticism 101, and Romantic Living 101.
Pin this article to read later! And make sure to follow us on Pinterest.
By Bailey Cavender on August 6th, 2018