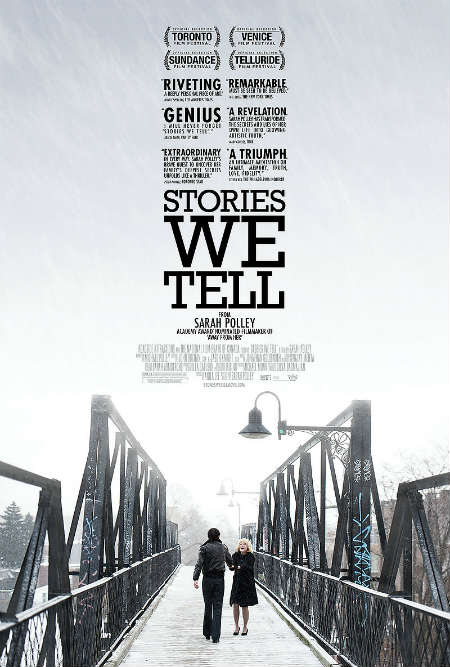 “Dream delivers us to dream, and there is no end to illusion. Life is a train of moods like a string of beads, and, as we pass through them, they prove to be many-colored lenses which paint the world their own hue, and each shows only what lies in its focus…Temperament also enters fully into the system of illusions, and shuts us in a prison of glass which we cannot see.” – Ralph Waldo Emerson

Every family, every individual has a story to tell; but each with their own perception, their own version of the past. A variety of factors affect our personal experience, our memories. Perception is individual and therefore illusory. Each person will see something different; remember an event or a person through an entirely different lens. Sometimes these perceptions will be similar to others’ but never identical.

How then is one to reconstruct the memory or the truth behind an individual and a specific event? It is these questions Sarah Polley, Canadian actress-filmmaker (Away From Her, Take This Waltz, Road to Avonlea, Mr. Nobody), asks to unravel the mystery behind her mother Diane who died from cancer when she was 11 in this compelling documentary.

A film so personal, so intimate risks the chance of coming across as self-indulgent and overly sentimental. And perhaps with a lesser filmmaker than Polley, this may have been the case. But she skillfully interviews her family members and friends as they reveal their interpretation of the story of her mother. They all become “storytellers.” At one point in the film, her father Michael points out that she’s a brutal director because she has succeeded in bringing out true emotion from him.

No doubt Polley manipulates reactions out of those closest to her, but it is done in such a way as to feel real and even raw. Do we not manipulate our own family members in real life to garner a reaction? Is it any less real when someone does it with a camera?

As the documentary unfolds, we the audience begin to feel like we know Diane.

As the documentary unfolds, we the audience begin to feel like we know Diane. She’s charismatic, larger than life, energetic and even scatter-brained. Most of us know someone like this in our own lives. They have an aura that draws everyone toward them. But with all of Diane’s liveliness she is clearly a woman with secrets. We soon learn that Michael Polley is not in fact Sarah’s birth father, but instead someone Diane had an affair with while doing a play in Montreal is. All of the storytelling leads to this and then afterward explored in an original, haunting way. “Who” the birth father is revealed with a twist, leaving you in suspense until the truth is revealed.

The film is seamlessly edited together with home videos (one a haunting audition tape of Diane – since she was an actress), reenactments, interviews with investigative – almost interrogative like questioning, as well as scripted narration. This is a unique film and is unlike any other I’ve seen before.

One of the most beautiful parts of the film was the narration done by her father, Michael. His written memories read like the words of a poet exploring his own experiences. He writes of his love for his wife and children as well as revealing an underlying insecurity about his own worth, especially as he learns the truth about his wife’s infidelity and the fact that his daughter (who in some ways he was closest to) is not his birth daughter. He approaches it all with optimism and understanding, yet one wonders if he is still in shock and denial about the whole situation.

By the end of the film, one begs the question: was Sarah able to get to the truth of her mother? Without giving too much away, just when you think you have it all figured out, the film ends with a new question. Without Diane here to tell us her own story isn’t it all interpretation? Perception? She is a mystery as is everybody. We reveal various layers of ourselves to different people at different times. And when we leave those around us, they are left to pick up the puzzle pieces to put together who we are. But they may not be able to see how it all connects.

Stories We Tell will invoke memories of your own life, mysteries we too want to solve about people gone too soon. They go in a smoky haze leaving behind a trail of mystery in their wake. How interesting it would be if with Polley’s talent and abilities we could all attempt to reconstruct the story of someone we’ve lost. It would make for a beautiful film series: The documentaries of life, and yes…the stories we tell.

Stories We Tell is now available on DVD. You can also rent it on Amazon and iTunes.

Our romance-themed entertainment site is on a mission to help you find the best period dramas, romance movies, TV shows, and books. Other topics include Jane Austen, Classic Hollywood, TV Couples, Fairy Tales, Romantic Living, Romanticism, and more. We’re damsels not in distress fighting for the all-new optimistic Romantic Revolution. Join us and subscribe. For more information, see our About, Old-Fashioned Romance 101, Modern Romanticism 101, and Romantic Living 101.
By Amber Topping on September 21st, 2013